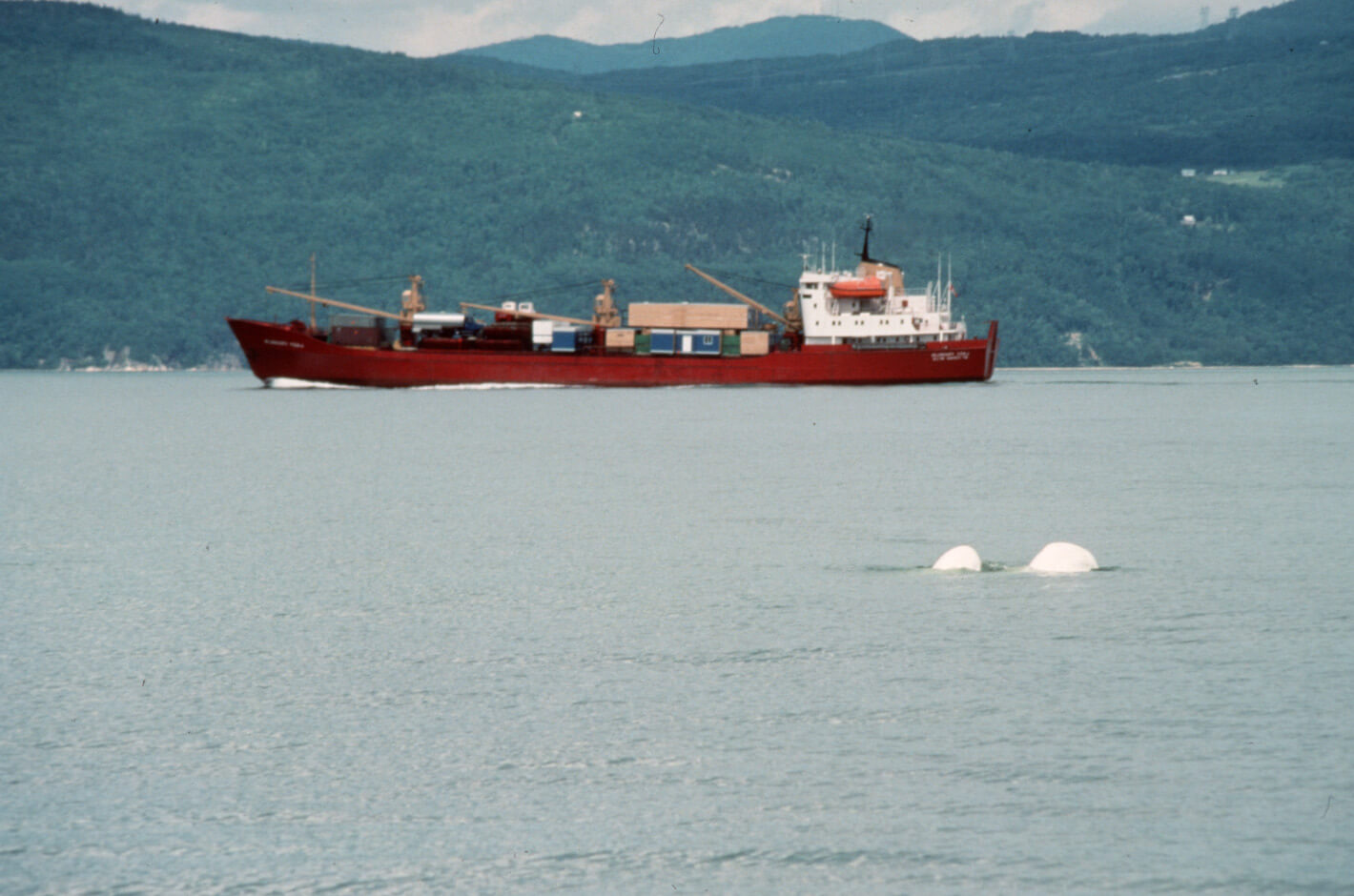 Two marine terminal development projects could triple maritime traffic in the Saguenay and lead to a 10% increase in traffic in the remaining critical habitat of the St. Lawrence beluga. In July, the Canadian Environmental Assessment Agency (CEAA) submitted its report on one of the two projects, that of a marine terminal on the north shore of the Saguenay. In its report, the CEAA concludes that “taking into account the application of the mitigation measures… the project is not likely to cause significant cumulative effects on the St. Lawrence beluga [in the construction zone or] in the extended zone.”

As part of this assessment, Fisheries and Oceans Canada was consulted. Beluga specialists at DFO answered specific questions about the risks associated with increased vessel traffic and mitigation measures for potential impacts of the project assessed by CEAA, as well as a second one for a maritime terminal near La Baie, on the south shore of the Saguenay. In their “Science Response”, the specialists conclude that the risks of adverse effects, notably noise disturbance, caused by the potential operation of the two new terminals are very real.

How so? The Whales Online team has carefully read the “Science Response” and offers the following summary.

For many species and populations, maritime traffic and the chronic noise associated therewith are amongst the threats to their recovery. Noise stemming from human activities is considered a form of habitat degradation. DFO’s “Science Response” sums it up well: “The beluga whale and other cetaceans are highly acoustic animals, and the effects of marine traffic shrink the time and space of their world, which is known as their acoustic space. Reducing this space can result in lost opportunities, including the ability to feed or to feed effectively, to detect or communicate with congeners or to detect danger. Occasional interference with these vital functions is not likely to have long-term effects on reproduction or survival. However, repetition of these lost opportunities over several days or during critical periods of the annual cycle can lead to measurable impacts on vital parameters.”

Like other toothed whales, belugas use sounds to communicate and probe their environment via echolocation, both for orientation and for feeding. However, the frequencies of sounds audible by belugas and the frequencies they can produce compete with the noises produced by vessels. This can result in a masking of the animals’ hearing, communication or echolocation and, in extreme cases, damage to the inner ear causing temporary or permanent deafness. Cases of deafness are generally associated with impulse noises (e.g. seismic surveys or the use of military sonar). The good news is that the noise levels that could cause long-term deafness are never reached in the habitat of the St. Lawrence beluga, says researchers at Fisheries and Oceans Canada, “even in the peak marine traffic area at the mouth of the Fjord where ferries run continuously and the ecotourism fleet operates during the day.” 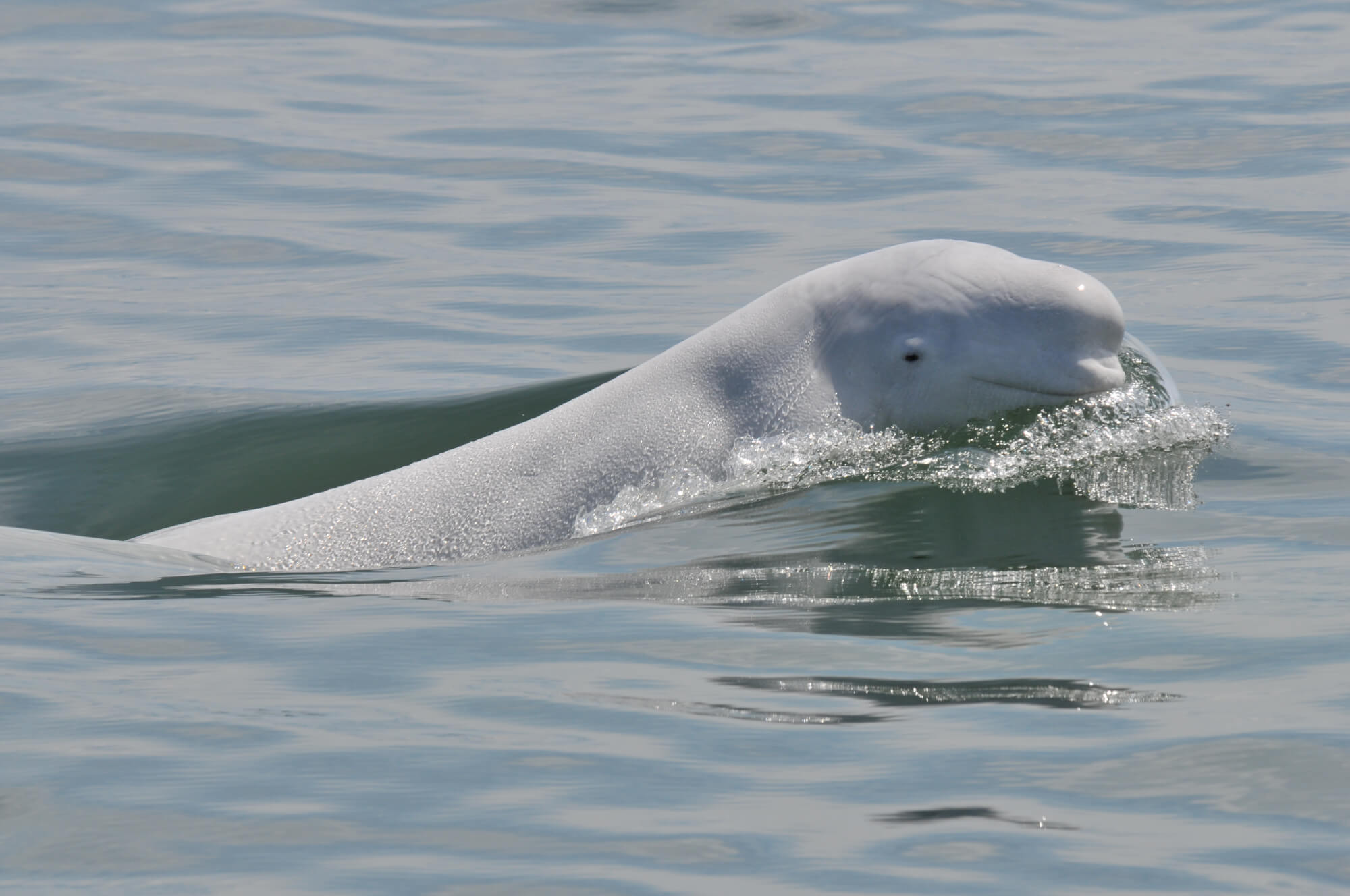 Like other toothed whales, belugas use sounds to communicate and probe their environment via echolocation, both for orientation and for feeding. © GREMM

Nevertheless, disturbance of St. Lawrence belugas and masking of their communication and echolocation is possible when ships transit through beluga habitat, even several kilometres away. How can the effect of these passages be measured? As indicators, researchers use the frequency and duration of co-occurrences, in other words, the presence of ships and belugas in an area where navigation noise can impact whales. Fisheries and Oceans Canada researchers note that “Noise can therefore spatially and temporally reduce the animals’ acoustic space, which can force the animals to use their vital functions during quieter periods or limit them to smaller areas.”

Possible impacts in the Saguenay and in the Estuary

But let’s go back to the two projects being analyzed by Fisheries and Oceans Canada and the associated increase in the number of transits. The “Science Response” concludes that: “These increases in traffic are likely to interfere with beluga whale communication and echolocation by producing a 2 to 5% increase in the time during which vital functions could be affected. In some areas, such as the mouth of the Saguenay or the northern channel of the Estuary, this increase is in addition to the noise generated by the current high volume of traffic which may already affect beluga whale communication or echolocation 39% to 46% of the time.

According to scientists at Fisheries and Oceans Canada, “These estimates suggest that the increased risk from increased traffic, although not negligible for communication and echolocation for individuals using the Saguenay, is low for the SLE population as a whole because on average, a small percentage of the population is located in the Fjord at any given time versus the rest of its habitat.” However, researchers point out that the projects under study will also increase traffic, and thus exposure of belugas to its effects, by nearly 10% in the St. Lawrence Estuary, where the rest of the population is found.

“Elevated risks cannot be ruled out given the current state of the declining population for which noise has been identified as a risk factor.”

In their response, researchers state that all the information needed for a comprehensive assessment of the impact of this additional traffic on belugas is not yet available. In a context in which the population is already in decline and is subject to multiple anthropogenic and natural pressures, they warn: “Elevated risks cannot be ruled out given the current state of the declining population for which noise has been identified as a risk factor.” Later, they add, “Increasing anthropogenic pressure in this part of the habitat may further jeopardize the population’s recovery.”Lastly, it notes that these projects are inconsistent with the objectives of the recovery plan adopted in 2012 and the recently proposed measures to reduce the impact of anthropogenic stressors.

Can we mitigate the increase in the effects of maritime traffic?

Fisheries and Oceans Canada researchers have also been called upon to propose mitigation measures for the two proposed projects. Even if they point out from the outset that “The most effective mitigation measures are avoidance,” they propose including the use of land routes, using Rio Tinto ships to ship Arianne Phosphate’s materials, spatial and temporal restrictions in accordance with the sectors and periods of intensive use by belugas, quieter boats, or even compensation measures such as reducing noises already present in order to mitigate the impact of the introduction of new sources. The authors of the “Science Response” warn that all of these scenarios require long-term follow-up to gauge their effectiveness.

In their analysis, Fisheries and Oceans Canada’s researchers point out that “conservation of quiet high-density habitats provides animals with spatial and temporal windows to perform their activities effectively.” They specify that “Habitats along the south shore and Saguenay are currently not very noisy given the low level of marine traffic in these areas.”

Call for patience and caution

Given the large number of projects currently under study that could increase maritime traffic in critical beluga habitat, GREMM recommended to the CEAA in 2016 to “accelerate the production of a comprehensive portrait of noise and noise propagation throughout critical beluga habitat to identify whether there are any acoustic refuges and how they can be protected.” According to GREMM, “This information is essential to establish an effective strategy to ensure the protection of St. Lawrence belugas and to assess the impact and acceptability of projects such as the implementation of a marine terminal on the north shore of the Saguenay.” 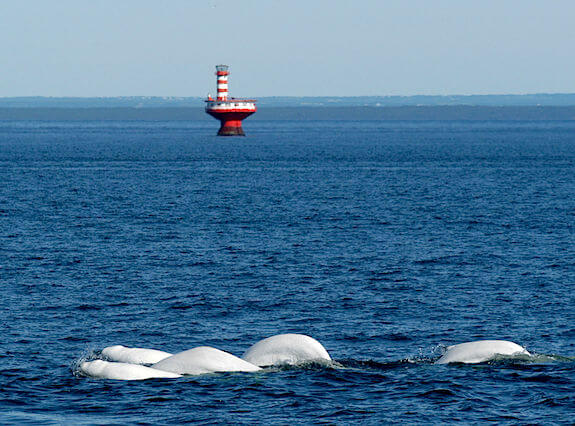 These wishes are being fulfilled. Tools are being developed to better assess the impact of noise on individual belugas as well as on various beluga communities (those that frequent the Saguenay or the South Shore, for example). The Government of Quebec recently announced its financial support for the development of a simulator of maritime transport and the presence of marine mammals by Clément Chion and his team (Université du Québec en Outaouais), while researcher Yvan Simard and his colleagues (Fisheries and Oceans Canada), with the support of the Government of Canada’s Oceans Protection Plan, are working to develop a model for sound distribution in critical beluga habitat. These models will take into account all proposed projects, including mitigation measures, to measure their cumulative effects. They will also help better understand where acoustic shelters would be most beneficial.

DFO’s Yvan Simard reminds us that “to answer questions, you need measurements, you need data. People think that we know everything about everything and everywhere, but the truth is that there are still many things to measure. And these elements must be measured with science, not with impressions.”

Thus, “patience and caution are required in the development of maritime activities,” recalls GREMM’s Robert Michaud. “Heavier traffic in their critical habitat could be detrimental to the recovery of St. Lawrence belugas. Development projects can no longer be evaluated on a piecemeal basis; instead, projects must be reviewed from a more holistic perspective. We must also strive to preserve those habitats that are still undisturbed today. Maintaining acoustic refuges could prove beneficial for belugas. The protection and recovery of belugas is everybody’s business, and it’s a long-term project.”