The day is calm with a quiet whisper of a wind, while out in the bay, a few dark spots are moving in the distance. Despite the absence of summer tourists, there’s action in the sleepy village of Tadoussac. This time, the visitors are regulars that have decided to stick around a little longer than usual: minke whales. These baleen whales are feeding near the shore.

The presence of krill on the beach might be a clue to what attracted them here. A few minke whales are in the bay, others are at the mouth of the Saguenay… Their surface feeding behaviour still fascinates residents, who pace the shoreline in hope of observing them. “It’s amazing that there are still minke whales around so late in the season!” exclaims Patrice Corbeil, GREMM’s director of education. 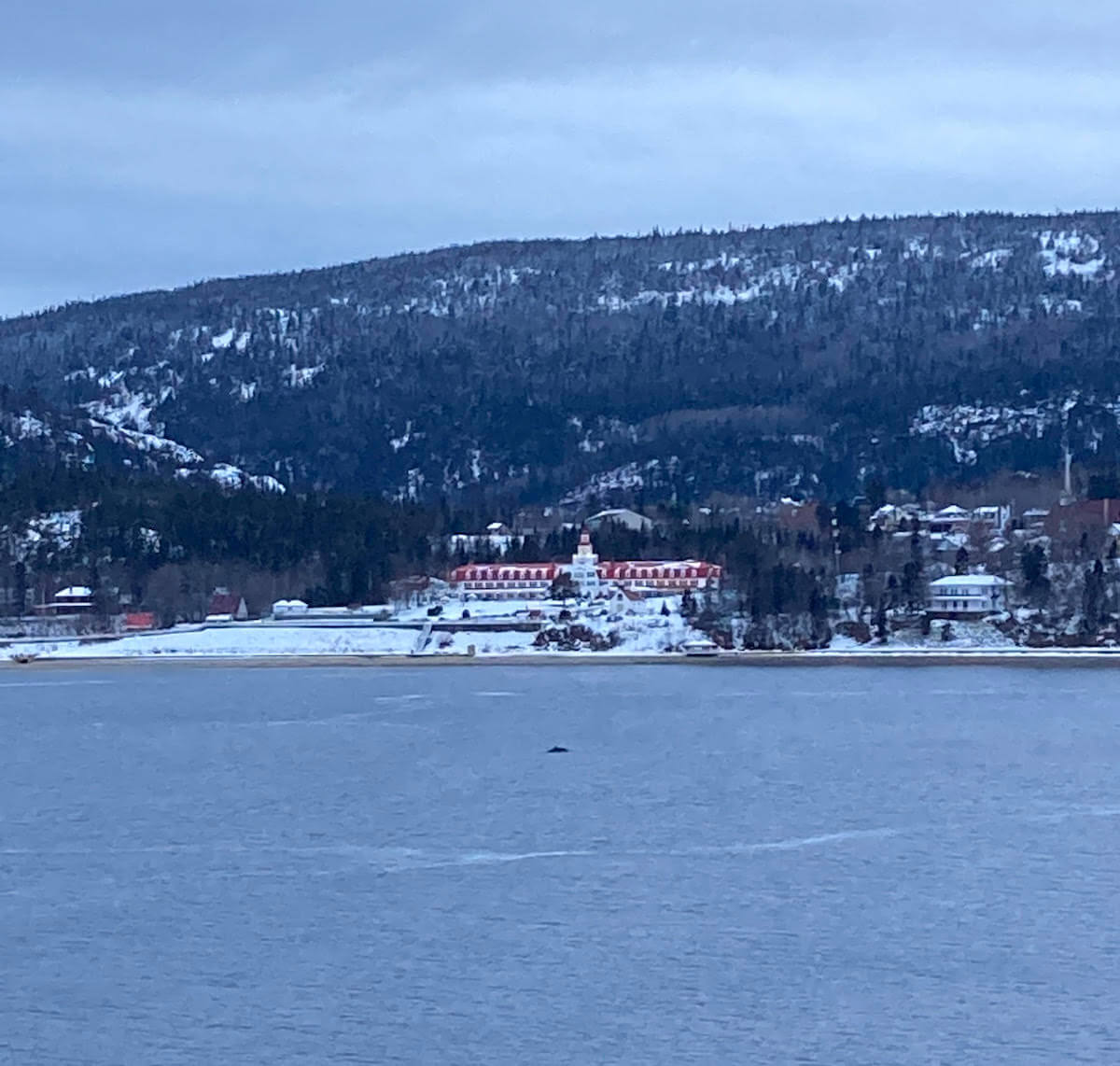 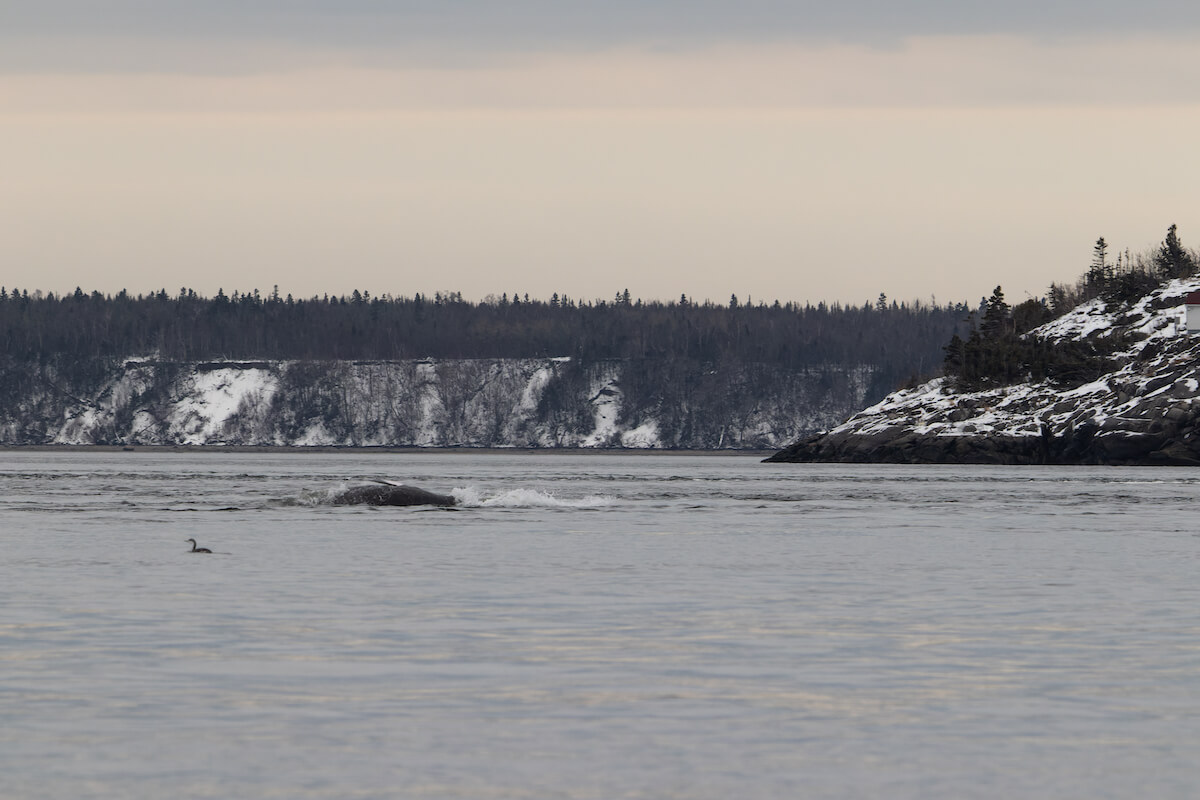 The smallest of rorquals often performs spectacular manoeuvres at the surface. © Titouan Gauchet 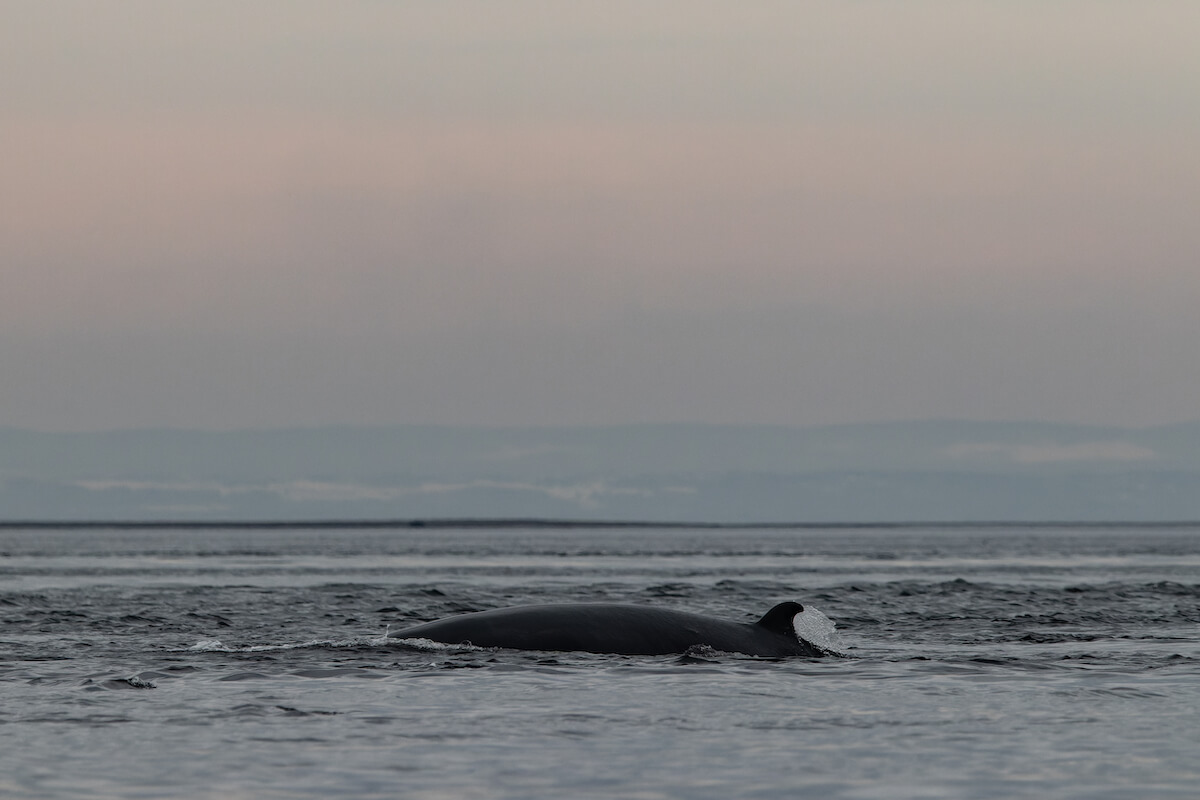 Even more surprisingly, a new humpback whale to the area ventured into the Saguenay Fjord on November 29, following in the “footsteps” of several other whales this summer. Based on photos that wildlife photographer Renaud Pintiaux was able to share with amateur cetologist René Roy, this individual had likely been observed in August by the Mingan Island Cetacean Study (MICS).

At Cap-de-bon-Désir, a land-based observation site for marine mammals in Les Bergeronnes, the action on the water is still in full swing. Renaud Pintiaux offers a poetic summary of a special morning: “It was a calm, serene day with a light breeze and an oftentimes glaring sun. Just before dawn, right in front of my eyes and in fantastic light, a gathering of at least 150 harp seals… not to mention minke whales, harbour seals, and a ruffed grouse […].” A humpback whale was also spotted in the area, as was a seal in Les Escoumins.

Last week, an avid reader of our weekly column was treated to quite the surprise. Sceptical that there could still be sightings of humpback whales this time of year, the resident of Saint-Siméon found herself pondering on the morning of Friday, November 25: “Humpbacks, I thought? Impossible.  So I decide to head down to the marina (I hadn’t been there all week, thinking I wouldn’t see any more whales this year). It’s almost noon and it’s snowing hard. I spot a whale, which I first take to be a large minke. That is until I saw the huge tail slip gracefully back into the water. It’s a humpback! I’m so moved!” she exclaims regarding this remarkable observation in the middle of a snowstorm.

Action in the water!

In addition to all the observations in the Saguenay-St. Lawrence Marine Park, two minke whales and a few harbour porpoises were reported from the Franquelin sector. Near Gallix, a minke whale approaches the shore and a spout is spotted offshore, just in front of the town. Lastly, a harbour seal pokes up its head in the Bay of Sept-Îles and a grey seal is reported near the Sainte-Marguerite River.

Want to share your observations and contribute to citizen science? Use the marine mammal observation entry tool.