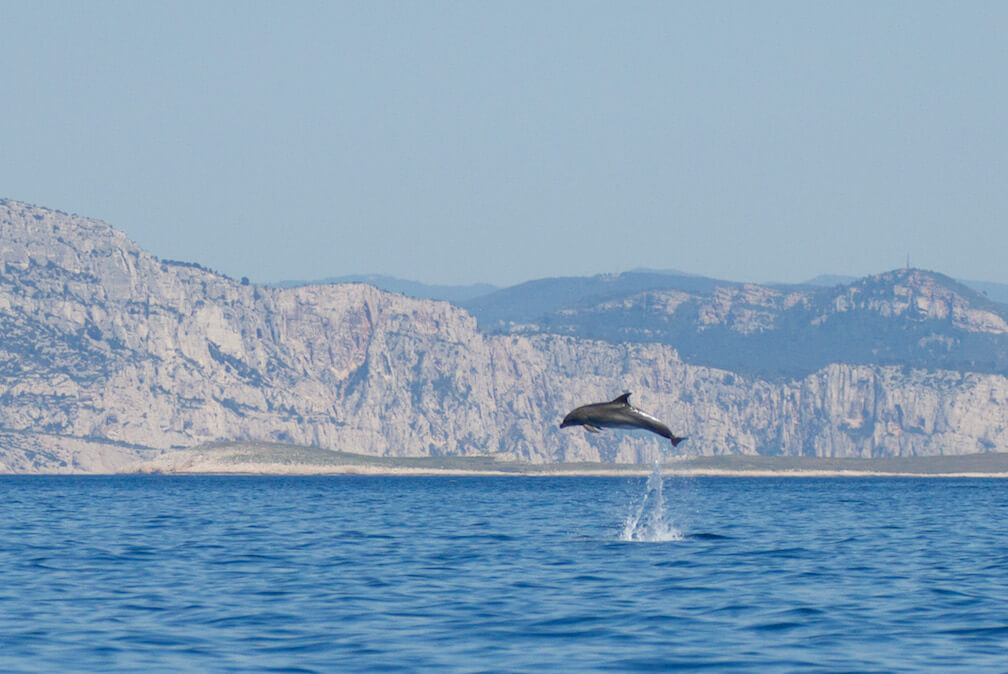 Dolphins occasionally end up alone and interact with humains, sometimes for a long period of time, at their own risks. © Julie Jourdan, GECEM

The female dolphin known as “Dolphy” regularly plays with swimmers and boats in the French port of Collioure. It is even said that she completely loses interest in humans as soon as her canine friend enters the water. For two years she has been a tourist attraction in this small coastal town. These stories of dolphins who seem to befriend humans or pets stir the imagination. But these behaviours can sometimes affect their well-being.

Marine mammals that live in closer proximity to humans than their counterparts are called “solitary-sociable”. This phenomenon was analyzed in Frontiers in Veterinary Science through a review of literature concerning nearly a hundred cases having occurred since 2008. Most documented individuals are bottlenose dolphins of the genus Tursiops. How do we explain this tendency? These species generally live near the coast. They are therefore more likely to interact with humans and this solitary behaviour is more likely to be observed. Researchers also studied a few cases of solitary belugas.

Some individuals are believed to be more likely to become solitary just because of their personality. But researchers also note a number of cases where a particular event preceded the separation between an individual and the rest of its group. For example, dolphins became solitary when they were in poor health or following the death of a fellow dolphin. Or, a young dolphin whose mother perishes before teaching it how to “live in society” might find itself alone and subsequently seek the contact of humans and boats.

The social structure of dolphin and beluga communities is of the “fission-fusion” type: the group comprises different subgroups and its composition is constantly evolving. Thus, an individual may decide to leave its group to join another one. But the current situation of dolphins in Europe means that different herds are not as close together geographically as they once were. Individuals in search of a new group may never succeed in finding one and therefore become solitary despite their efforts.

A solitary dolphin will not automatically socialize with humans. According to researchers, it must go through several stages before it is considered “solitary-sociable”. Initially, a solitary individual adopts a territory where it can rest and feed, but is not necessarily interested in humans. It may then begin to follow boats, frolic in their wake and show an interest in people swimming while maintaining its distance. Then, the individual may become sociable with humans, in particular those who try to acclimate the animal to contact. Lastly, in the final stage, the animal allows contact with any human. Rarely does the dolphin return to live with members of its own species.

At first glance, solitary dolphins do not appear to be unhappy about their condition. Contact with humans can even become very important to them, because in a way it substitutes for contact with other dolphins. However, benefits of human contact are temporary and dolphins may do without for survival-related reasons such as foraging.

Solitary-sociable dolphins can enter into contact with humans who are ill-intentioned or who fail to evaluate the consequences of their actions. For example, giving food to a marine mammal can cause it to become seriously ill. Further, it can affect its diving behaviour by making it less inclined to feed on its own.

Humans can also harm the animal without realizing it if they try to interact with it while it is resting or feeding. Dolphins accustomed to human contact also spend more time in shallow waters, which can increase the risk of strandings. Their proximity to boats makes them more prone to collisions.

Contrary to popular belief, dolphins are not always harmless to humans. A number of serious injuries have been documented as being inflicted – whether deliberately or not – by solitary-sociable dolphins. Despite their playful character, these wild animals are much more massive than us and can exhibit aggressive behaviour. 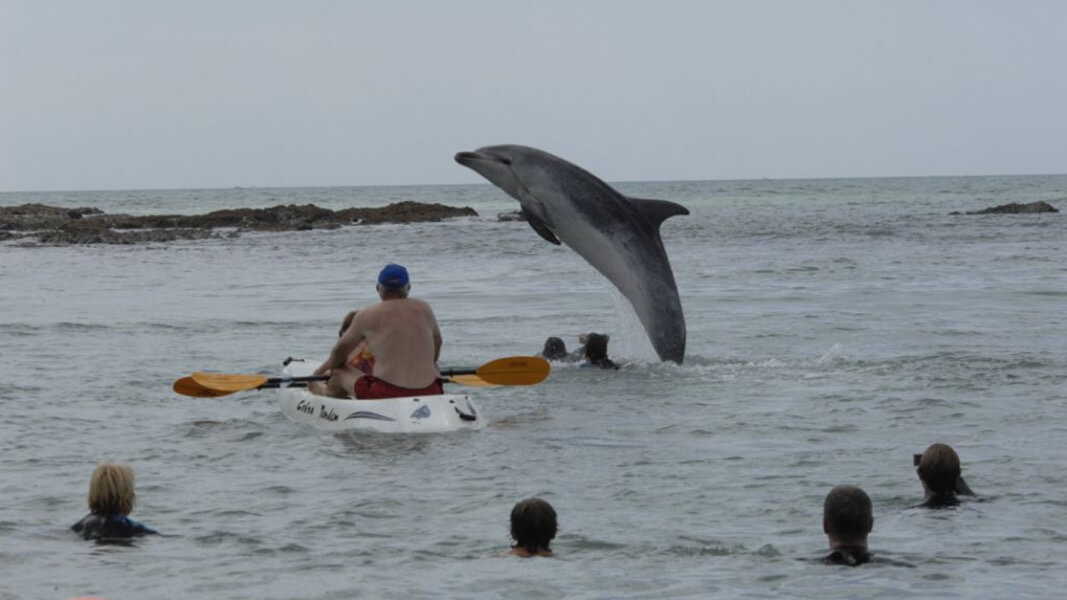 Interactions between humans and dolphins involve several risks for both human and animal. The dolphin “Moko” breaches close to a kayak and some bathers. © Orca Research, Dr. Ingrid Visser.

In many countries, there is no legislation in place to protect solitary marine mammals. This legal vacuum allows travel companies to exploit the fun-loving nature of these animals by promoting contact between humans and cetaceans. Additionally, media coverage of dolphins swimming with humans may increase the number of people that attempt to approach them. This increased socialization can take the dolphin or beluga to the next stages of sociability and prevent it from returning to live with other members of its species or endangering its health. Managing solitary-sociable individuals must therefore be done through public education and legislation, researchers say.

In the absence of such laws or regulations, experts suggest informing the public – in collaboration with the media – of best practices for interacting with dolphins such as not to feed them and not to touch sensitive areas such as their face or blowhole.

In Canada, the Marine Mammal Regulations prohibit the disturbance of any marine mammal, including feeding or swimming/interacting with it. In areas where populations are at risk, regulations are stricter and vessels are obligated to maintain a greater minimum distance.

Lastly, the animal may be relocated to its home community to facilitate its reintegration. This is what was done in 2017 with Nepi, a beluga that found itself trapped in a New Brunswick river, far from its native population in the St. Lawrence. It was flown to the port of Gros-Cacouna with the hope that it would join a beluga pod. Despite a deteriorated state of health, the beluga survived this tricky operation. Thanks to a tag on its back, it is known that the beluga remained in the Estuary for 19 days, after which it stopped transmitting signals. Subsequently, researchers had no news from Nepi until the latter was observed the following summer in Nova Scotia. It was accompanied by another beluga, a sign that it had interacted with its companions after the rescue operation. It was observed again in December 2018 in Prince Edward Island, where it interacted with a group of divers. The mixed success of the operation underscores the challenges and risks associated with such relocation efforts. 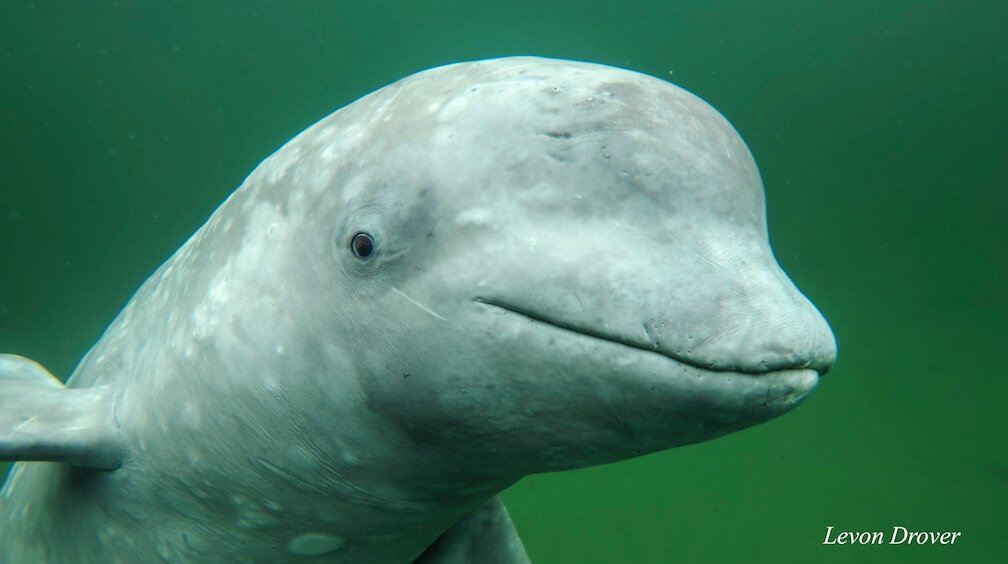 The beluga Nepi has been found in a river in New-Brunswick and relocated in a beluga pod in Quebec. However, he was seen again in the Maritimes a year later. © Levon Drover