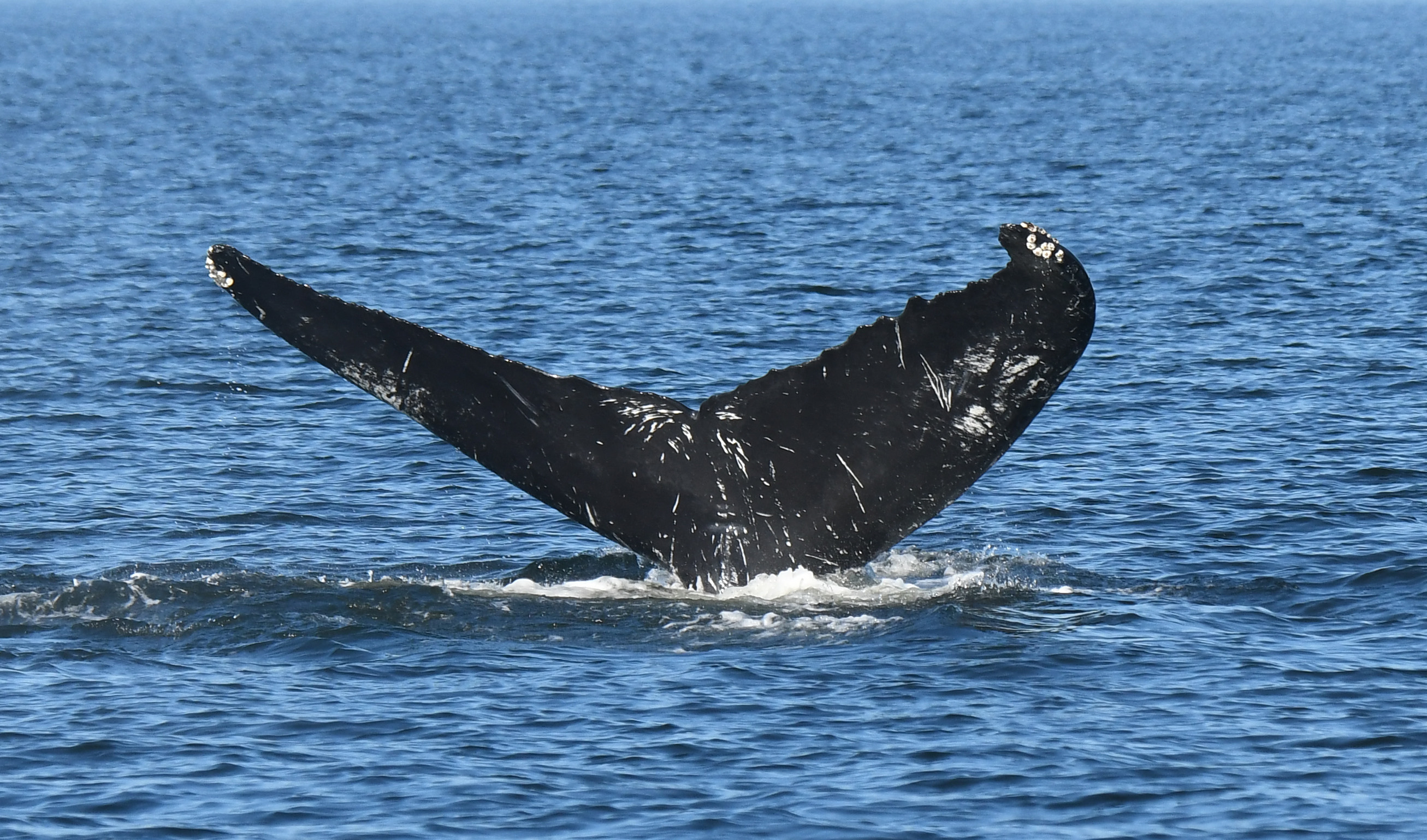 In the past few days, the whale-watching cruise season has ended, both on the North Shore and in the Gaspé Peninsula. It’s not for any lack of cetaceans or seals in the waters, though! While a few species such as the harbour porpoise seem to have already left the St. Lawrence, others are still actively foraging.

Off the coast of Forillon, a passenger takes advantage of the last whale cruise of the season. He lets out a holler when he sees a humpback slapping its pectorals: “It looked as if it was waving goodbye!” Humpbacks and North Atlantic right whales are the only cetaceans known to perform such behaviour in the St. Lawrence. The massive size of their pectoral fins could explain why they developed this habit. But what’s the point of slapping one’s fins on the water? The role of a behaviour varies according to the context. In this case, perhaps it was communicating with its fellow humpbacks or playing. 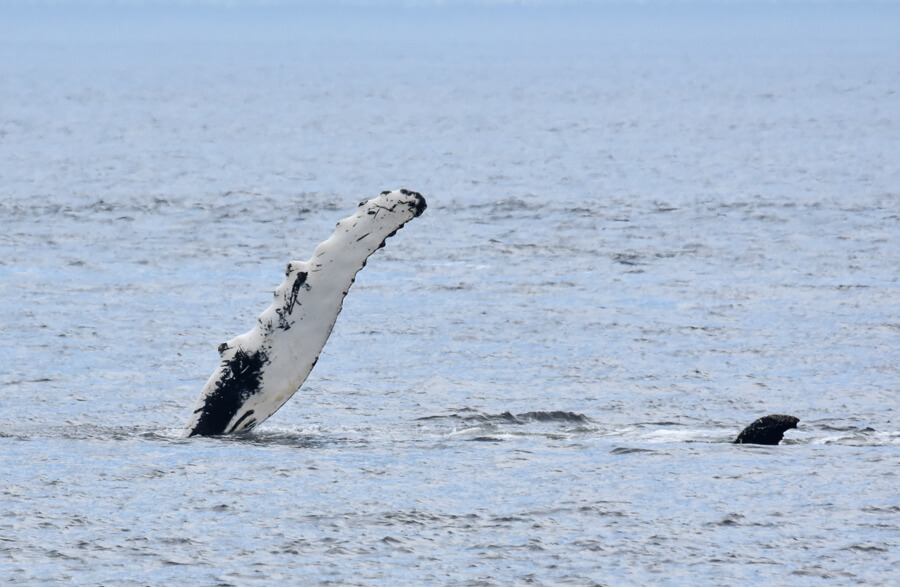 From dry land we see!

All summer long, Renaud Pintiaux photographed whales out at sea nearly on a daily basis. And now that the boats are all out of the water? There he is, posted at Cap de Bon-Désir in Les Bergeronnes! When you’re passionate, you’re really passionate! Through his binoculars, he spots a humpback and a few fin whales. Nearby, a minke whale approaches the rocks. A few belugas cruise by. “It’s really a great ending to the season. This past weekend, I identified the female fin whale Zipper, who had been seen earlier this summer, but who had then left the area. I also saw Bp973, which neither I nor the GREMM team had yet photographed this year. As for humpbacks, I saw H918 and H943, also known as “Galaxy,” as well as one individual that has been observed for a few weeks, but is not yet known to researchers. Perhaps the one I’m watching in the distance is one of those three.” 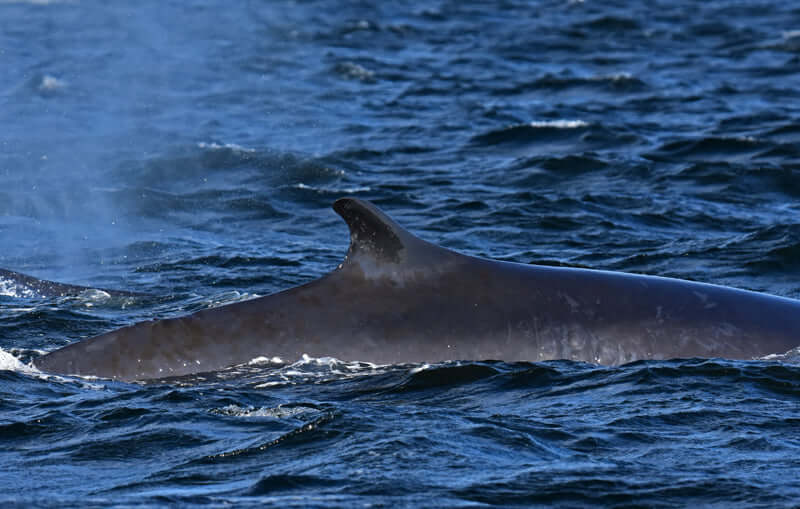 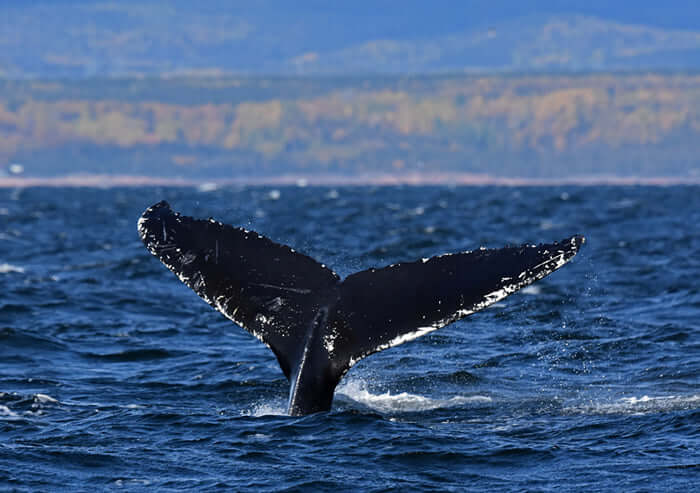 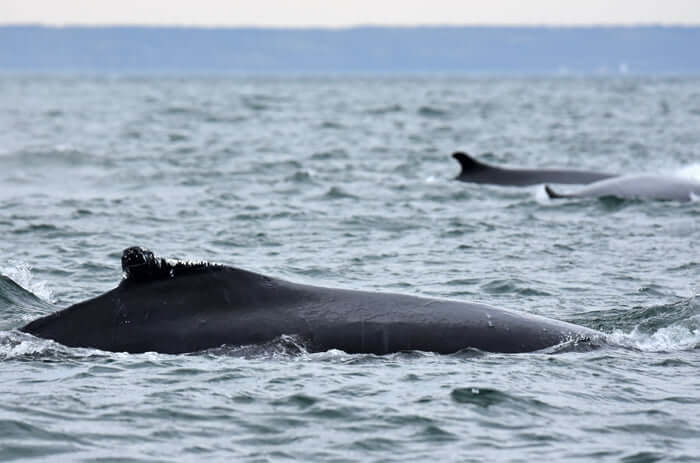 Posted atop the dunes near Tadoussac, a bird surveyor is thrilled with the return of great whales to his stomping grounds. “The last few weeks they were too far off the coast of Les Bergeronnes for me to see, but on October 13, I spotted two fin whales near Île Verte.” It is possible that more whales may have passed by the dunes, but his focus is first and foremost on birds, which are particularly plentiful this fall. “The past few days, we’ve been breaking records for migrating raptors. I also saw a very rare rufous-sided towhee, a beautiful bird.”

In the Charlevoix region, more precisely in Anse-au-Sac near Saint-Irénée, one resident likens belugas to puffballs – those large, round and smooth white mushrooms – when she sees them swimming by in the golden hues of autumn. The belugas are in small groups of six or seven individuals. When the St. Lawrence is not frozen, belugas can be found from L’Isle-aux-Coudres to Forestville. In winter, they prefer ice-free waters, often those of the Gulf.

After a particularly quiet summer in Gaspé Bay in terms of sightings, a resident of Cap-aux-Os is delighted to finally see spouts and backs from her kitchen window. At least two humpbacks and two fin whales ventured close to shore this week. Is there a greater abundance of food in the bay these days? Or are the whales taking advantage of the calm waters here to rest a bit before embarking on their marathon migration?

“It’s a very exciting fall,” exclaims Jacques Gélineau. Although summer trip reports left a lot to be desired, the new season seems to be making the area more alluring for the world’s largest animals. On October 12, he saw about twenty blue whales. Twenty! “I photographed individuals not featured in the catalogue, as well as several familiar faces such as Pulsar, Bianco and Torishinto. However, in the case of Torishinto, I was sad to see deep gashes on its peduncle and rub marks caused by rope. Poor thing!”

The Sept-Îles sector also appears to be a hotspot for fin whales lately, with Jacques tallying a total of 10. A humpback has also been roaming the region.

Aerial surveillance for North Atlantic right whales continues in order to implement measures such as speed reductions or fishery closures should one be detected. On October 13 in Jacques Cartier Strait between Havre-Saint-Pierre and Anticosti Island, it wasn’t right whales that aerial observers spotted, but rather nine fin whales, one humpback and one blue whale. This very deep strait is characterized by cold waters that are rich in decomposed organic matter. A rise in the natural seabed causes the deep layer to rise to the surface, where it mixes with and thereby enriches, cools and oxygenates the surface water. As a result, Jacques Cartier Strait offers the perfect conditions for the whales’ prey… and therefore for the whales as well! Unfortunately, whales tend to travel too far offshore for residents in these regions, who can often only make out their spouts very, very far away.