Citizens of the St. Lawrence, stay alert! Report any dead or vulnerable marine mammal to 1-877-7baleine 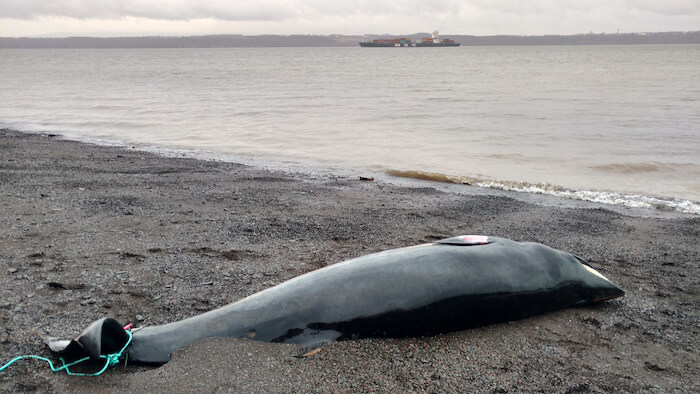 The Quebec Marine Mammal Emergency Response Network (QMMERN) relies on cooperative local citizens and fishermen to promptly report any dead or struggling marine mammal by dialling 1-877-7baleine (1-877-722-5346). Since the beginning of the spring thaw, carcasses of white-sided dolphins, three belugas and several seals have been exposed by the melting ice.

April is also synonymous with the start of the commercial fishing season in the waters of the Estuary and the Gulf of St. Lawrence. Whales can can get tangled in fishing gear. In order to fulfil its mandate, the QMMERN relies on reports from fishermen and local citizens.

Every carcass reported represents a treasure trove of information for research and conservation. Network volunteers or partners head to the site of the stranding to collect data such as the species, sex, and size of the animal. These data are used to track marine mammal populations in the St. Lawrence. It is notably thanks to such beluga mortality studies that in December 2014, the Committee on the Status of Endangered Wildlife in Canada (COSEWIC) evaluated the population of St. Lawrence belugas as “endangered”.

Since 1982, belugas have been the focus of a special sampling program spearheaded by Fisheries and Oceans Canada. If the carcasses are fresh, they are sent to the Université de Montréal’s Faculty of Veterinary Medicine (FMV, Saint-Hyacinthe) for a comprehensive necropsy. This examination helps determine most notably the cause of death, the pathologies involved and contamination levels of various toxins. “It’s a bit as if we’re shown a photo and then we’re able to write the narrative of the animal’s death”, sums up veterinarian Stéphane Lair, director of the St. Lawrence beluga health monitoring program. “It’s one of the longest-lasting monitoring programs for a population of marine mammals,” he adds.

If the carcass is in too poor a condition to be transported, the St. Lawrence National Institute of Ecotoxicology (SLNIE) performs in situ sampling to determine at the very leas 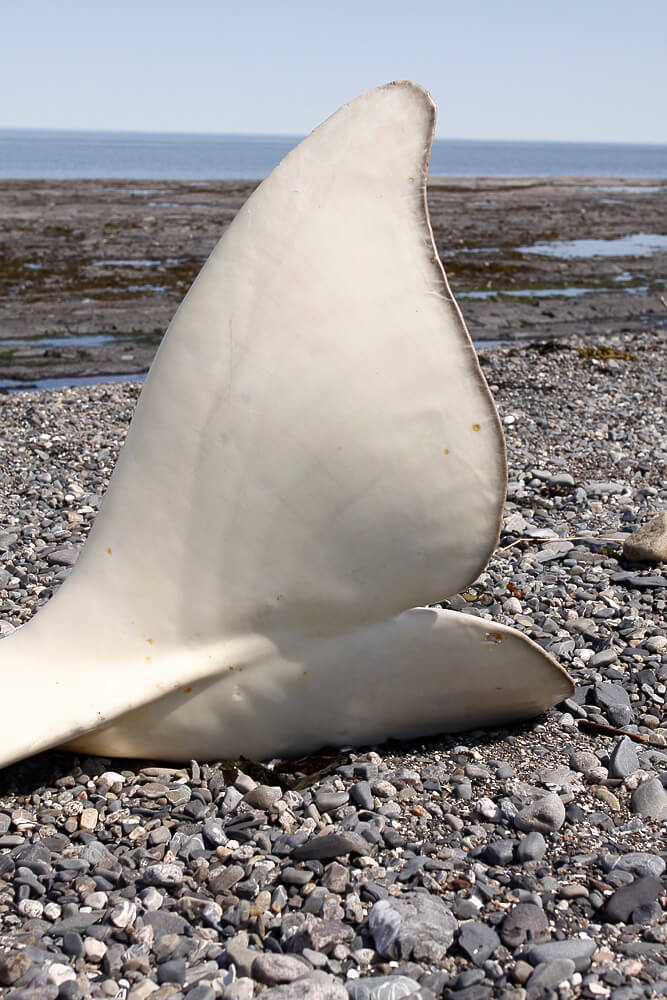 Every year since 2004, the Network handles between 3 and 20 incidents involving whales tangled in fishing gear across Quebec; some are already dead while others are still alive when they’re reported. When a whale in a precarious situation is reported quickly, an intervention can be attempted by specially-trained teams in an effort to rescue the animal and minimize damage to or loss of the fishing gear.

A Network of Partners and Volunteers

The Quebec Marine Mammal Emergency Response Network exists thanks to the involvement of a dozen or so private and governmental organizations and a hundred or so volunteers.

“Thanks to the collaboration of citizens and the mobilization of efficient field teams, we have a clearer picture of the various threats faced by the St. Lawrence and its inhabitants,” explains Robert Michaud, Network coordinator. The Network is responsible for organizing, coordinating and implementing measures aimed at reducing accidental mortality of marine mammals, rescuing marine mammals in difficulty, and facilitating the acquisition of data from animals that have died in the waters of the St. Lawrence in Quebec.