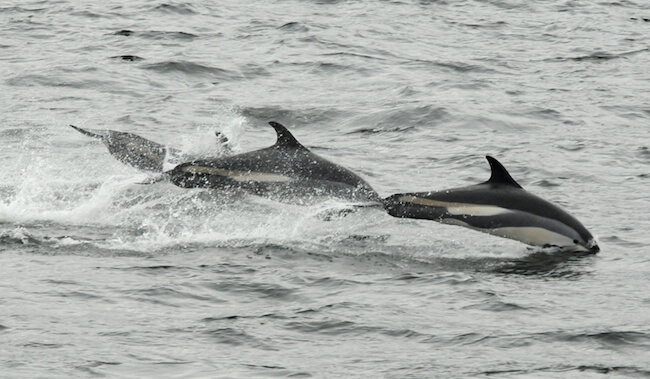 On the wharf used by the Mingan Island Cetacean Study (MICS) in Longue-Pointe-de-Mingan, a thin coat of frost glistens. “Time to migrate south!” exclaims research coordinator Christian Ramp on Twitter, in reference to whales returning to their winter quarters, just like his research team. MICS’ 40thfield season concludes this year on October 2.

“It’s really just extraordinary!”, exclaims one observer from Pointe-des-Monts on the other end of the line. While out in their small watercraft near the coast, her daughter, looking out to sea, caught sight of a number of shiny bodies rising briskly above the waves. Dolphins! “There were at least two hundred!” The more the two individuals got excited and shouted, the more the dolphins seemed in turn to get excited and display spirited behaviours. White-sided dolphins measure about 2.5 metres long at maturity and usually travel in large groups, sometimes forming pods of up to 500 individuals. Groups normally comprise individuals of the same sex and age group.

In Gaspé, too, hundreds of white-sided dolphins are observed, in addition to a wide variety of other species. “This week, I saw three blue whales, four fin whales, tuna, small schools of porpoises and minke whales,” says one captain working for a whaling-watching outfitter. On the morning of October 3, he spotted from shore nearly a dozen large spouts out at sea, from the cliffs of Forillon to the lighthouse of Cap-des-Rosiers.

In Les Bergeronnes, on September 27, a local woman is unable to take her binoculars off her eyes. “There are so many spouts in front of my house! And the whales were swimming so close to one another,” she says, her eyes glowing. Since then, her daily observations have tapered off, with minke whales in particular still present.

On October 3, during a cruise through the Marine Park, a Marine Mammal Interpretation Centre naturalist observes a pair of fin whales swimming together. One of the individuals is much larger than the other. A third fin whale appears in the distance. Did she see one of the star whales still present in the Marine Park, like Zipper, Boomerang or Trou? Despite the presence of sizable waves, she also observes porpoises, minke whales and razorbills. Grey seals are also present.

Observers who dress for the season therefore still have the privilege of witnessing nature in all her beauty.