Can Whales Be Deaf or Blind? 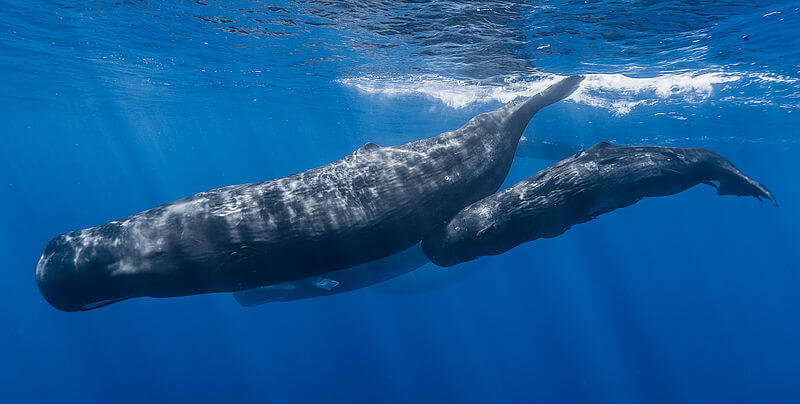 Sound travels much faster through water than through air. Whales have taken advantage of this phenomenon thanks to their highly developed hearing. This sense is critical for communication, feeding, spotting predators as well as sense of direction. Toothed whales are capable of echolocation, which means that through sound, they are able to gain a sense of their surroundings. Vision in marine mammals is also adapted to their living environment and the low light conditions of their underwater worlds. Their eyesight is also useful to them in their social relationships.

So, can whales be deaf or blind?

Sensitive to the acoustic environment

Whales have an acute sense of hearing. Like humans, who may suffer damage to their ears as a result of standing too close to a concert stage, marine mammals can also experience damage to their auditory systems. Such damage can stem from various factors: chronic noise exposure (e.g. shipping), periodic intense noise exposure (explosion, detonation), aging, congenital deficits, parasites, ototoxic drugs (“toxic to the ears”, which can affect hearing), etc. Additionally, it is possible that PCBs (polychlorinated biphenyls) – persistent pollutants in the environment and widely used in many industries between the 1930s and 1970s – might have an impact on the development of the hearing system. Some toothed whales tend to have high concentrations of PCBs: this pollutant accumulates in the animals’ fat and can be transmitted when a mother nurses her offspring. But we do not yet know the exact effects of these toxic substances on hearing development in cetaceans, indicates one particular study on hearing loss in stranded toothed whales.

Individuals rely on their hearing for many vital functions (food, orientation, communication). “Whales depend on their hearing perhaps more than any other animal on Earth, and a deaf whale cannot survive for very long,” explained Peter Scheifele, bioacoustician at the University of Connecticut, in an interview with Whales Online.

“Whales depend on their hearing perhaps more than any other animal on Earth, and a deaf whale cannot survive for very long” – Peter Scheifele, bioacoustician at the University of Connecticut.

As humans, we are usually able to prevent hearing-related accidents (e.g. by wearing earplugs at a concert), but whales cannot. Numerous unseen anthropogenic causes can affect cetacean survival, including increased shipping traffic, soil surveys, the diversity of frequencies used by various tools, etc.

Eyesight in whales is well suited to their living environment, as these animals are particularly receptive to bluish tones. Marine mammals are also able to see near and far when they are at the surface. In dolphins, it has been demonstrated that this sense plays an important role in social interactions.

However, vision does not seem to be indispensable, at least for toothed whales. For example, there exist a number of species of dolphins – such as the Amazon river dolphin (botoin Brazilian Portuguese), the Bolivian river dolphin or the Araguaian river dolphin, all freshwater species inhabiting the rivers of South America – that are nearly blind. They use echolocation to “visualize” their environment and hunt using sound. In addition, blind yet otherwise perfectly healthy sperm whales have also been observed. Having one less sense did not seem to impact their nutrition: their echolocation system is so well developed that it allows them to hunt in very deep waters where light does not penetrate.

Given that hearing is used by whales to perform many vital functions, a deaf cetacean would not be able to live very long. In toothed whales, echolocation allows them to perceive their environment through the use of sound, making it possible to compensate for poor vision that might otherwise undermine their ability to feed. A whale can therefore be blind and survive its disability.