Calf and Female Mortality in Belugas: “Problem No. 1”

November 9, 2019: The Quebec Marine Mammal Emergency Response Network receives a report of a female beluga carcass on the beach in Cacouna. The first observers note that the tail of a dead calf can be seen poking out of her genital slit. The carcass of the pregnant female is sent for analysis to Université de Montréal’s Faculty of Veterinary Medicine. A necropsy is conducted by wildlife health professor Stéphane Lair and his team. Samples are sent out for analysis. The soon-to-be-published results will be added to those of other necropsies performed on St. Lawrence belugas. Since this population is considered endangered, carcasses are recovered as soon as possible in order to closely monitor the causes of mortality. 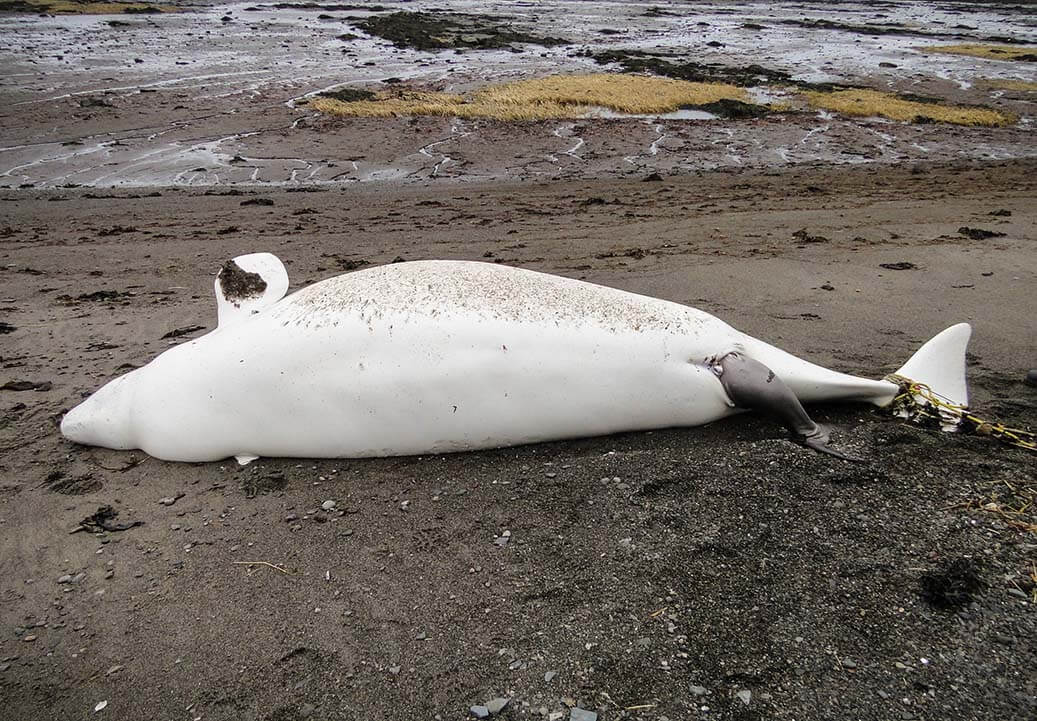 Carcass of the female beluga found in Cacouna on November 9, 2019 © Yvan Roy

This new mortality coinciding with a birth is unfortunately not an isolated incident within this population. “Currently, I would even say this is the Number 1 problem,” mentions Stéphane Lair. In a study that presented the analysis results of beluga necropsies from 1983 to 2012, he and his team point out that a large percentage of the carcasses found stranded are females and calves, especially since 2008. Unfortunately, this trend continues to this day.

What is causing higher calf mortality in St. Lawrence belugas?

It is possible that the apparent increase in calf mortalities is associated with an uptick in female mortalities during calving. Indeed, most necropsied calves show no signs of disease, but do present signs of fetal stress that are suggestive of laborious calving. For example, traces of meconium (the first excrement of a newborn) are regularly found in the lungs of necropsied calves. Additionally, difficult calving has been the most important cause of mortality in adult female belugas since 2008.

What might be causing females to experience laborious calving?

There are a number of hypotheses that might explain the increased risk of difficult calving, including human disturbance to female belugas during pregnancy or at birth, poor nutrition, or exposure to endocrine disruptors.

“When we observe a new phenomenon of mortality in a given species, we must look for causes that are also new,” explains Stéphane Lair. “Exposure of belugas to certain emerging halogenated flame retardants (HFRs) such as PBDEs has increased exponentially between the 1990s and 2000s and concentrations remained high through 2012. However, the spike in mortality of females and calves due to difficult calving began about 10 years ago. Although the causal link could not be established with certainty, some studies have suggested that these HFRs could be to blame.”

Numerous other changes to beluga habitat have been observed in periods that largely correspond to those of higher calf and female mortality.

The beluga calving season runs from late June to early September, which coincides with the high traffic season on the water. Noise emitted by watercraft as well as the presence and movement of recreational boats and commercial vessels are factors that may have contributed to the increased mortality of pregnant female belugas. Indeed, a surge in boating traffic was observed at the Tadoussac marina in 2010 and 2012. In those same years, Parks Canada observers noted an increase in the simultaneous presence of belugas and pleasure boats in the Saguenay Fjord. Also during the same period, the Quebec Marine Mammal Emergency Response Network received a very high number of reports of calf carcasses.

The decrease in the availability of certain prey or diminishing ice cover that helps mitigate stormy seas are other changes in beluga habitat that reached extreme proportions from 2010 to 2012.

Which of these suspects is the culprit? “Imagine a pregnant beluga in winter: lower ice cover forces her to travel long distances to find calmer waters. In spring, she cannot get the nutrition she needs because the stocks of fatty fish are no longer of sufficient quality and quantity. During the summer calving season, she finds herself in a heavy traffic of kayaks, sailboats, motorboats and freighters, which represents a source of stress and significant energy expenditure. In addition to this issue, there are the effects of contaminants accumulated in her fat. What will ultimately cost her her life? Is there just one reason or rather a combination of factors?” wonders Robert Michaud, scientific director of the Group for Research and Education on Marine Mammals.

Necropsies and analysis of their long-term results continue. These studies, combined with those investigating the potential causes of laborious calving, may help to better understand the reasons for the decline in the St. Lawrence beluga population and identify solutions to aid in its recovery.