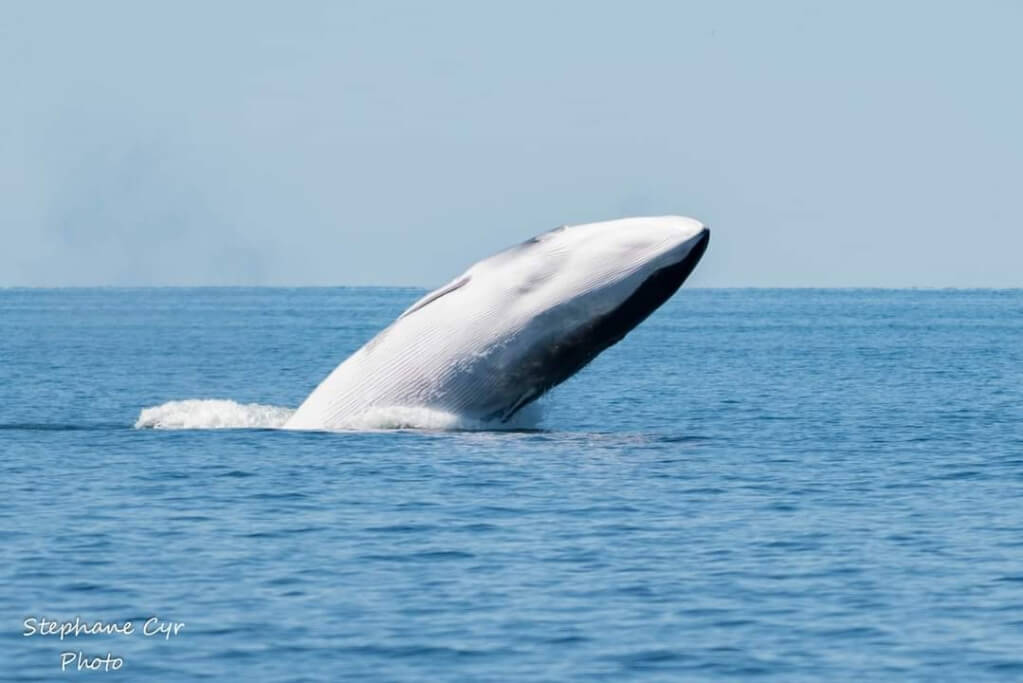 There are pictures you only take once in your life. This one comes to us from off the coasts of the Mingan Archipelago and Anticosti Island. This area is currently hosting tens of fin whales and humpbacks, in addition to a dozen or so North Atlantic right whales and more harbour porpoises than can be counted. If such abundance is astounding in and of itself, a breaching fin whale is even more fascinating. 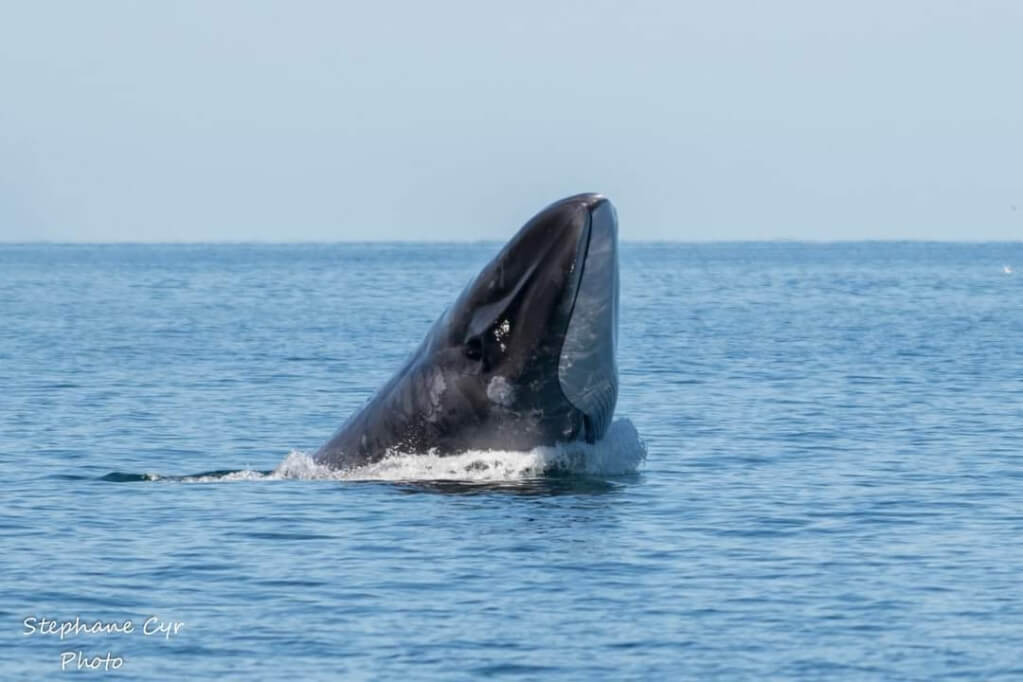 Theoretically, all whale species are capable of breaching. Some species do so more than others, such as humpback whales, North Atlantic right whales and dolphins. Minke whales are descent breachers as well, like the one that surprised a resident of L’Anse-au-Griffon on August 16 by launching itself into the air 11 times!

Other species are less aerial. For them, breaching appears to be a behaviour adopted by certain individuals. Such is the case with sperm whales, where breaching is more common in small females and young individuals than in males.

In fin whales and blue whales, breaches are rare. Seaman and whale aficionado Jacques Gélineau has only ever had the chance to see a fin whale breach once, despite having spent dozens of summers on the water. “This is the sort of sighting that is both memorable and rare,” confirms Robert Michaud, scientific director of the Group for Research and Education on Marine Mammals (GREMM), who has had the privilege of seeing a handful of fin whales breach throughout his 35-year career.

Even in species that exhibit more frequent aerial behaviour, breaching remains very physically demanding. Whatever purpose these acrobatics serve must therefore be significant enough to outweigh the energy expenditure.

Why breach, then? Theories vary depending on the species, location, time of the year, etc. The most common explanations offered relate to socialization, communication, parasite removal or even play.

A few humpbacks have been identified in the area typically covered by the Mingan Island Cetacean Study (MICS) in Quebec’s Minganie region. Aramis and her calf, which had been seen off the Turks and Caicos Islands last winter, are now present in this area. “It’s pleasing to see that they have had a successful migration,” points out Christian Ramp, who is responsible for the photo-ID catalogue of St. Lawrence humpbacks. Tracks as well as Tingley have also been observed.

Boaters enjoy a breathtaking moment on August 15 off the coast of Île aux Pommes. “I’ve been watching whales in the Estuary for 60 years and this is the first time I’ve seen anything like this,” says one crew member, surprised.Seven or eight humpback whales are so close that they’re practically swimming on top of one another. The whales roll over on themselves, raise their pectoral fins and tails, and let out low-pitched sounds. A moment of great beauty, and so intriguing! 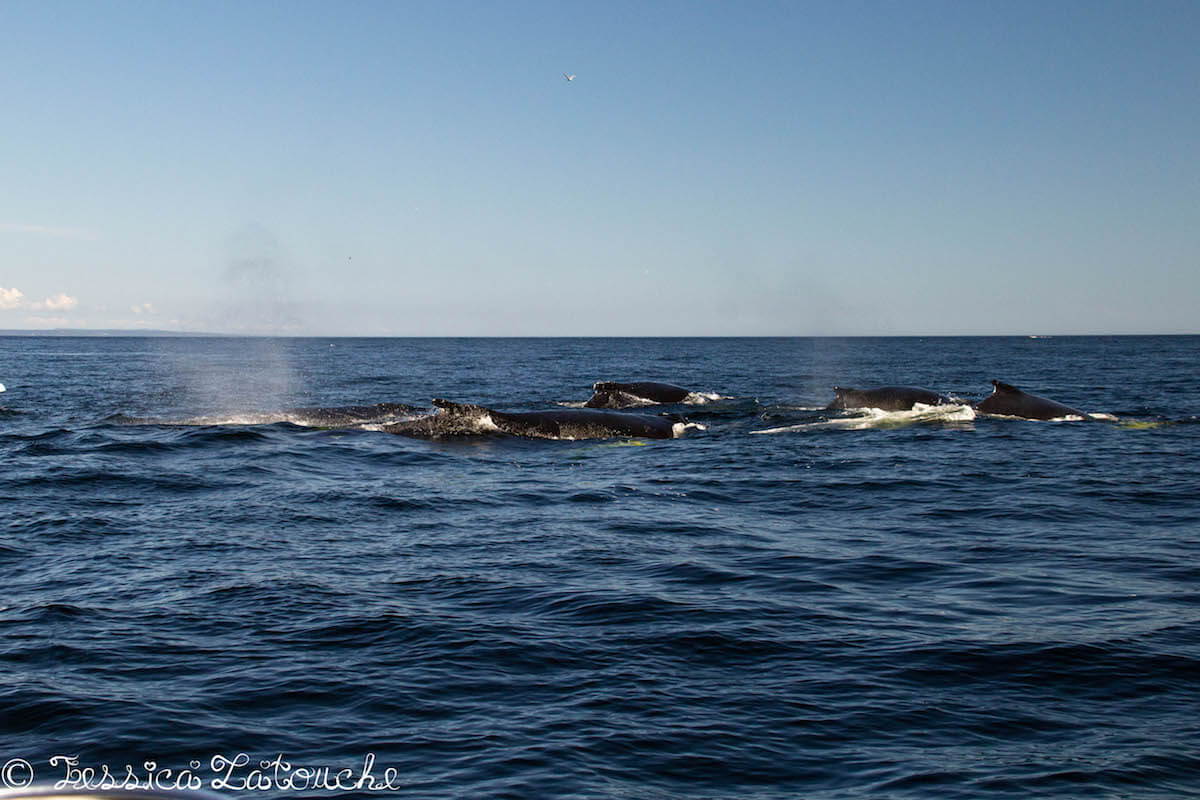 Humpbacks swim quite close to each others these days in the Estuary. © Jessica Latouche

On the morning of August 17 in the Saguenay-St. Lawrence Marine Park, GREMM’s research team gets the feeling it is sailing through a cetacean bunkhouse. “All the whales are relaxed, resting at the surface of a perfectly still river, it’s awesome,” shares Robert Michaud. For photo-identification purposes, this complicates matters, as the flanks of the fin whales are not clearly visible and the humpbacks are not raising their tails. However, some fin whales are more easily identified than others, like Boomerang, who was first documented in 1990. What a pleasure to run into an old acquaintance again!

And a few disappointments

“It’s pretty quiet in terms of spouts,” says one surprised observer from Pointe-des-Monts. This year, he has hardly seen any large rorquals, just a few minke whales and harbour porpoises. “This week I only saw three humpbacks cruising along. They seemed to be in a hurry to get to the Estuary.”

A pleasure boater from Matane also reports several outings on the water without encountering any marine mammals, on the heels of several weeks of considerable activity. He was on the lookout for the troubled humpback. Ultimately, it was seen in the Saguenay-St. Lawrence Marine Park on August 15 and 17. Despite targeted searches to locate it and heavy boating traffic in the area, it has not been seen again since then.

Near Cacouna, an observer for the Marine Mammal Observation Network surveys and photo-identifies belugas. “I’ve been seeing a good number of calves amongst the herds,” she is happy to report. “However, I find it unfortunate that, all too often, boaters get too close to the belugas, even though the law requires that we maintain a distance of 400 metres from them.” Belugas are particularly sensitive to the presence of nearby watercraft. As beluga calving season is in full swing, let’s give them a break by keeping our distance in order to give newborns and mothers a chance to develop their bonds in peace and quiet. 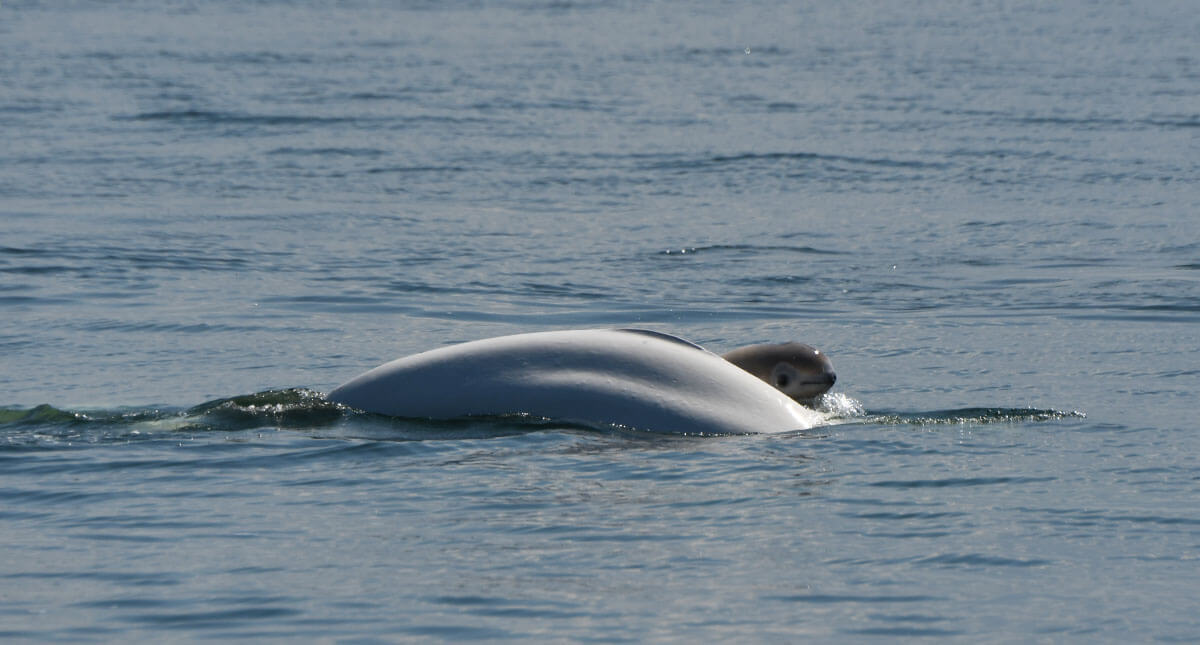 Beluga calves need to learn how to dive. © GREMM