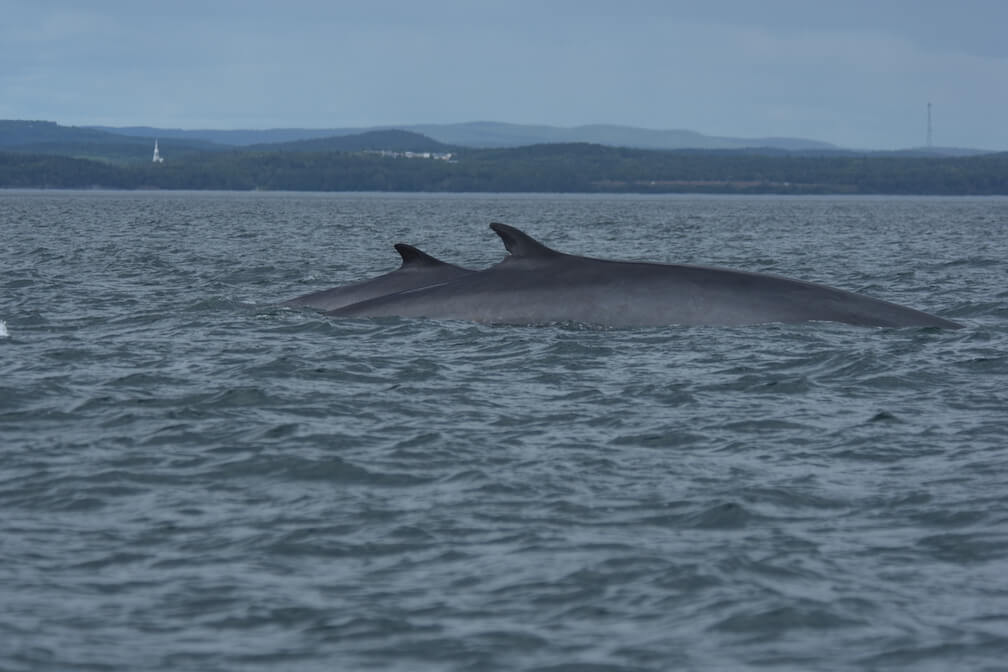 Boomerang, also known by the identification number Bp060, has been observed in the Saguenay-St. Lawrence Marine Park area since September. This female is recognizable by the shape of the rear part of her boomerang-shaped dorsal fin. A semicircular notch is located at the base of her dorsal fin and since 2011, an additional, albeit inconspicuous notch located at the tip of this fin makes identifying her that much easier. Boomerang has been a regular summer visitor to the Estuary for over 20 years. To identify her via photo pairing – i.e. comparing pictures taken on the water with those in the catalogue – researchers focus their attention on her right chevron, and more precisely on the set of lines and patterns on the back of her head. 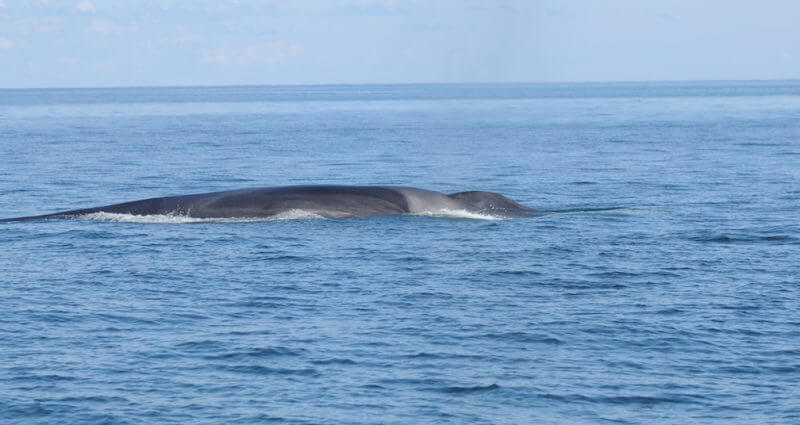 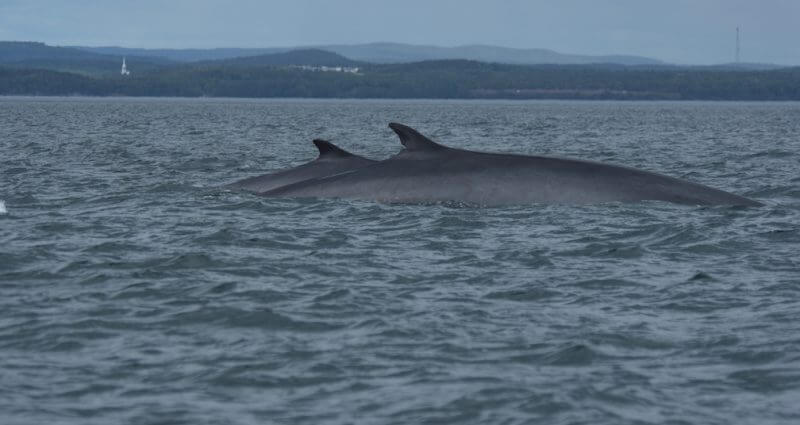 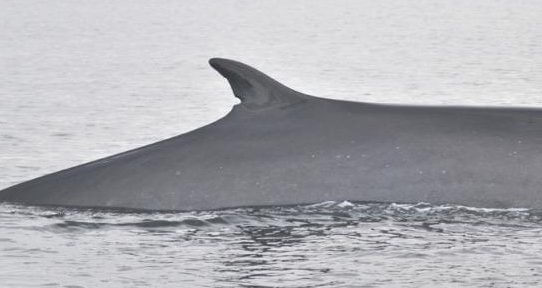 Just like other fin whales, such as Captain Hook, Newkie Brown, or U2, Boomerang belongs to the North Atlantic population of fin whales. These rorquals are known to migrate between their feeding and wintering grounds each year. Though we know they visit the estuary in the summertime and go to the warmer Atlantic waters in the wintertime, we do not know where exactly they go when they are not in the North Atlantic. Boomerang comes to the cold and nutrient-rich waters each summer to feed on krill or small schooling fish, such as: herring and capelin. She sometimes hunts on the surface by going in a circular or semicircular pattern to trap and capture her prey. When using this feeding technique, she rolls her body over to a side; most often it is her right side.

Boomerang was seen with a calf in 1990. Due to the lack of biopsy samples and the infrequent number of their encounters together, we cannot confirm her as the calf’s mother.

Boomerang has been frequenting the St. Lawrence Estuary for three decades. Listed in the catalog in 1990, this female fin whale could be around forty years old… as she could be sixty or even more! The oldest fin whale known was captured at the age of 140 years, and the longevity of the species is estimated at 80 or 100 years.
In 30 years of photo-identification, Boomerang was absent only ten seasons, so it remains visibly very attached to this summer feeding area. However, there have been times where it has not been observed for several years in a row. “I find it hard to believe that it was not seen while it was present,” says Timothée Perrero, research assistant at GREMM. There are times when she doesn’t seem to come around anymore. Why, and where does she go? Researchers would like to know! The movements of these giants are very poorly known, we don’t even know in which probably warmer waters the fin whales of the estuary such as Ti-Croche, Cayman or Boomerang will spend the winter. Fortunately, Boomerang always ends up repointshowing up her famous fin.
It is not because it always comes back to the same place that it was nicknamed Boomerang. Its nickname comes from the shape of its dorsal fin, which makes it quite easily recognizable, especially when combined with its clear chevron on the right side of the head.

Norway and Japan are the only two countries conducting commercial whaling in 2019. Could Boomerang be hunted by the Norwegians? Fin whales that visit the St. Lawrence Estuary are part of the North Atlantic population, the same group that is hunted in Norway. However, genetic distinctions distinguish fin whales in the Northwest Atlantic and the Northeast Atlantic. As a result, most individuals probably rarely cross the ocean from east to west. So there is little chance that Boomerang will be served on a plate in Oslo.

Fin whales and blue whales that visit the Estuary feed mainly on krill. From 2007 to 2017, a hydrophone anchored downstream of Les Escoumins recorded the infrasound vocalizations of these two species of whales as well as the concentration of krill present. Researchers Yvan Simard and Nathalie Roy of Fisheries and Oceans Canada published the results of this decade-long monitoring in the journal Le Naturaliste canadien, on the occasion of the 20th anniversary of the Saguenay-St. Lawrence Marine Park. Thanks to these data covering the entire year, i.e. every day regardless of meteorological conditions, these two researchers were able to observe that the presence of fin whales and blue whales has been relatively stable over the years, and that individuals seem to visit the park in greater concentrations in the fall. In winter, or rather as soon as ice forms, there is an almost complete absence of fin whales and blue whales. Unsurprisingly for observers on the water, fin whales tend to have a longer and stronger presence than blue whales. Interannual variability can be distinguished for the two species, though at the present time there does not seem to be any correlation between the presence of these species and that of krill. In fact, the presence of krill is high, and on average, krill biomass was higher in winter, when these rorquals were absent. However, krill concentrations fluctuate significantly over short periods of time, and do not show a strong correlation with semi-monthly tides. It should be noted that links between krill and rorqual concentrations can be difficult to establish, since infrasound detection is carried out over a vast area whereas krill detection concerns a more restricted area.

The boatmen were the first to talk about the fin whale called Boomerang this season. Often observed apart from other fin whales, this female can be recognized by the shape of the rear part of its dorsal fin, which is shaped like a boomerang, while a notch is also visible. Boomerang, a regular in the estuary for nearly two decades, has returned from its winter quarters in the lower latitudes of the North Atlantic where breeding occurs. However, these wintering grounds are still poorly known, as fin whales do not make large aggregations as do humpback whales.

Fin whales that reach the St. Lawrence Estuary, such as Newkie Brown, Captain Hook or U2, belong to the North Atlantic population. But are they genetically related to those found throughout the North Atlantic? Researchers intrigued by this question have taken several skin samples, biopsies, from fin whales in six feeding grounds in this portion of the Atlantic. The finding: there are indeed genetic differences between fin whales in the northwestern, northeastern and Mediterranean Atlantic. These results therefore support the hypothesis put forward at the beginning of the century by biologists studying the animals killed by whalers. They argued that North Atlantic fin whales are distributed into several sub-populations that make short migrations between their feeding and wintering grounds. These migrations would favor exchanges between neighboring sub-populations.

Fat biopsies can be used to detect contaminants or to identify ingested prey, while DNA can be used to reveal relationships and sex. Biopsies taken to date have revealed that the fin whale herd in the Estuary is composed equally of males and females.