A North Atlantic right whale was observed this week in the St.-Lawrence estuary © GREMM

This past week in the St. Lawrence Estuary, it was a funny-looking rounded black back with a V-shaped breath that caught everyone’s eye and created a great deal of excitement. A North Atlantic right whale! One of the last 400 representatives of its species, and a rare visitor to the Estuary… the most recent visit was back in 2016!

It all began on September 23 and 24, when photographer Renaud Pintiaux spotted this unusual visitor, but was unable to get a picture. On September 25, he observed two right whales a few kilometres apart off Cap de Bon-Désir, and finally managed to photograph one of them. “The first one I saw looked smaller and was diving for long stretches. That day she was heading east, so perhaps she left the area. The larger of the two individuals, which was taking shorter dives, I was able to photograph on five consecutive days,” he points out.

Thanks to his photos and the New England Aquarium catalogue, the right whale has been identified: it is Wolf (#1703), a 33-year-old adult female and the daughter of Moon (#1157). From that point on, it’s pure bliss: “So, did you see her?” “Unbelievable, it’s a dream come true”, “I cried when I saw her yesterday.” “The encounter of a lifetime!”, “I’ve been waiting for years to see one!” Each witness describes their precious encounter with Wolf as a gift. On September 29, the whale is off Tadoussac, near the Batture aux Alouettes tidal flats. Hearing the news, one resident near the dunes steps out of her house and spots the animal in the distance. “I never thought I would see one from my own backyard!”, she says, visibly moved. 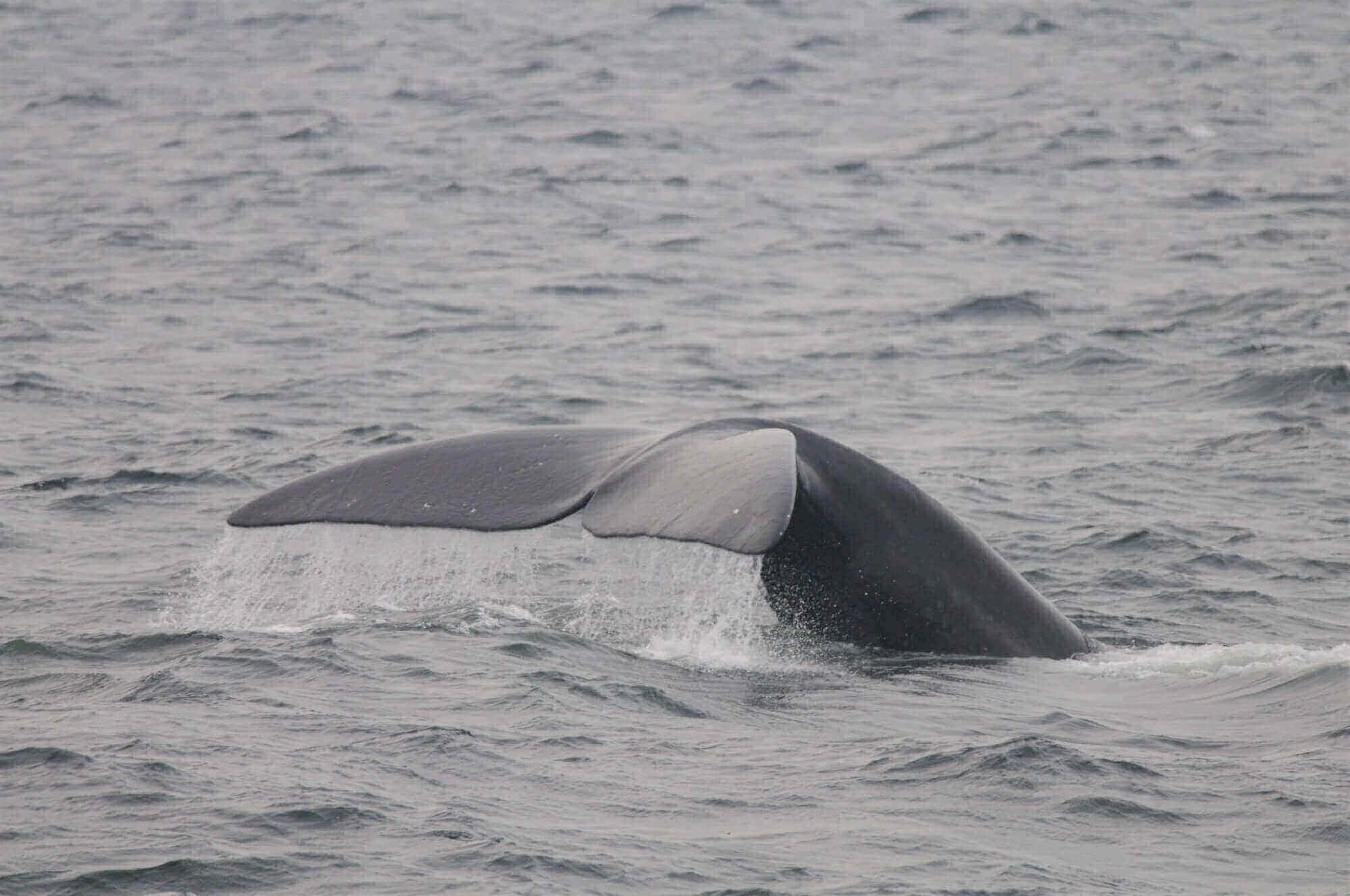 When diving, the right whale flukes its tail ©Laetitia Desbordes 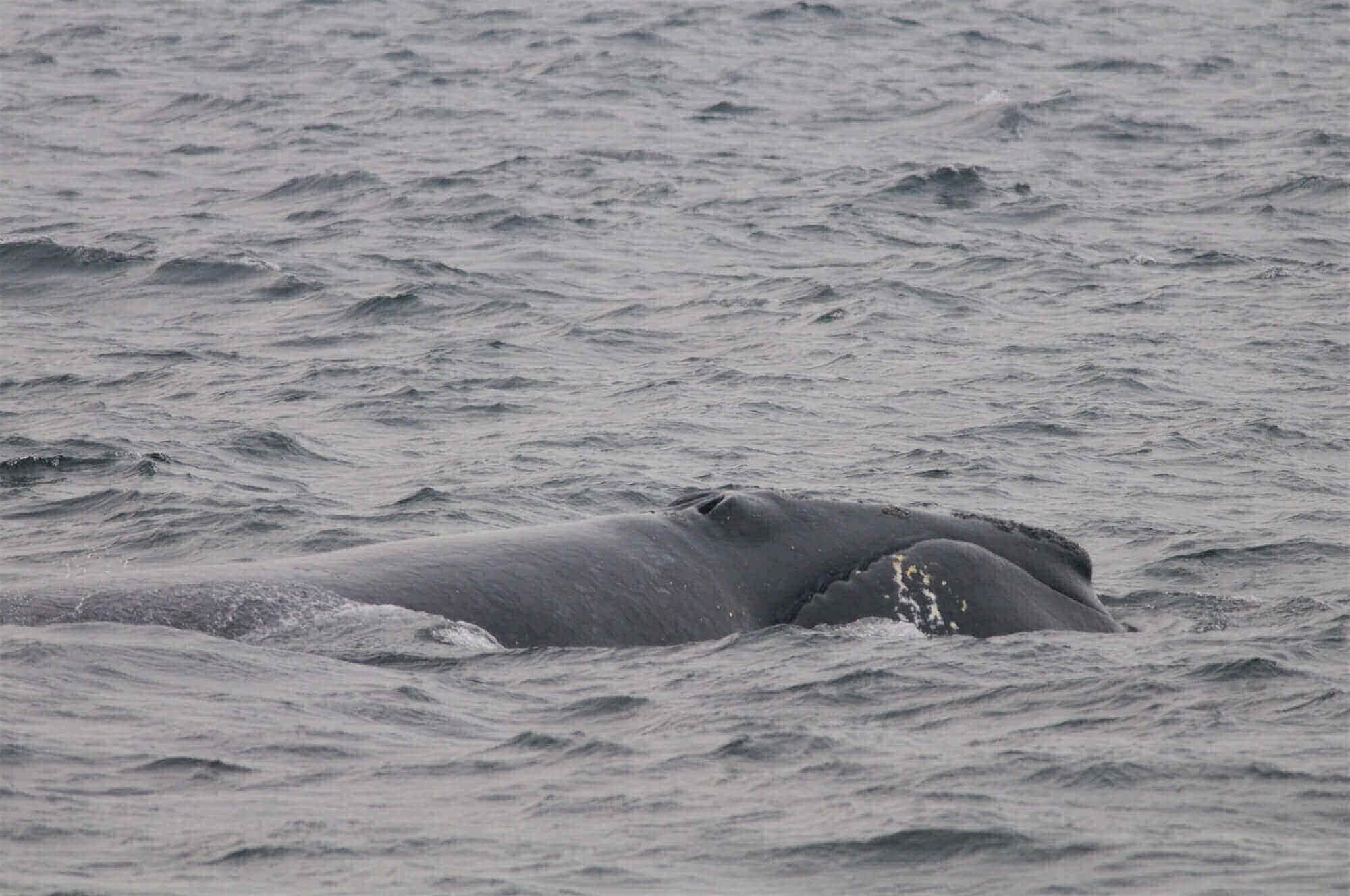 But the presence of a North Atlantic right whale also creates tension for the shipping sector. This critically endangered species is especially vulnerable to entanglements and collisions with watercraft. Plump and not particularly reactive, the species spends a lot of time on the surface and in shallow areas. On account of its presence, ship operators are encouraged to slow down and be extra cautious. To limit disturbance, observation boats must maintain a minimum distance of 400 m.

Apart from this exceptional visitor, the Saguenay-St. Lawrence Marine Park is still teeming with life. On September 29, five humpbacks and twelve fin whales, including a group of nine highly active fins in an all-out feeding frenzy, were tallied during a whale-watching cruise. A few days earlier, three blue whales had also been sighted. It is suspected that all this action is attributable to a good abundance of krill.

In Gaspé Bay as well, “it’s hot!” exclaims the owner of a whale-watching cruise outfitter. I counted about twenty fin whales, ten humpbacks, 30 to 40 minke whales and almost 300 dolphins! There are so many whales we can’t even go see them all!” Between Anse-aux-Griffons and Cap Gaspé, the spouts of large rorquals extend as far as the horizon. “On the other hand, we haven’t had a single blue since the end of July,” points out our observer. 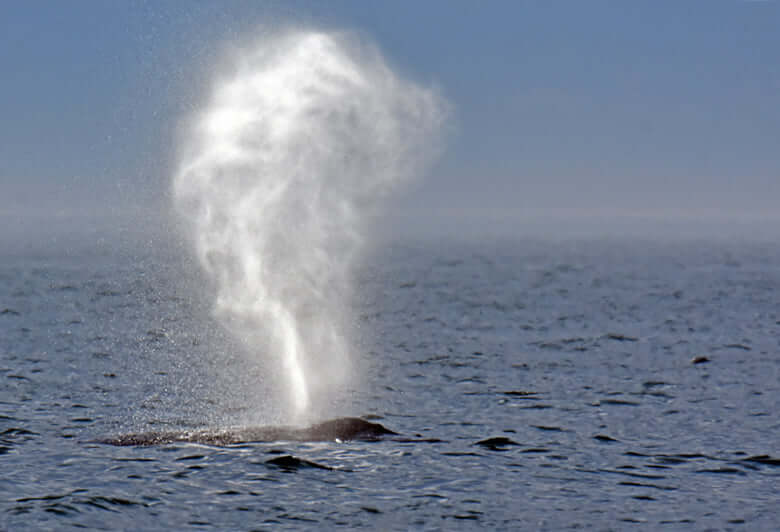 The breath of a humpback whale off Les Escoumins ©Renaud Pintiaux

Off the coast of Sept-Îles, blue whales are still very much present. Anik Boileau, director of the Sept-Îles Research and Education Centre (CERSI) identified 10 fin whales and 5 blue whales this past week. This passionate researcher recently received an award (article in French) from the Animal Welfare Institute for her work in whale health assessment.

But sightings in the Gulf are not easy to come by. “As is often the case this time of year, the animals are very far offshore,” points out Jacques Gélineau, en route for a boat trip of over 200 km. This long-time collaborator shouts out his observations: “Lots of grey seals, minke whales, a humpback and a couple of blues. I saw about six blues, but there are at least twenty or so in the area.”

On the way, he identifies a few long-known individuals including B033 and B119, and takes a moment to enjoy their fall acrobatics. “They’re feeding a lot, but it’s also the beginning of the mating season. We see a lot of blue whales in pairs, and sometimes a third individual tries to muscle its way in. It creates a lot of ruckus, which we call a ‘rumba’!”

When he’s not on the water, Jacques is showing off his best whale photos in the exhibit “The fascinating universe of marine mammals of the North Shore” at the North Shore Regional Museum in Sept-Îles. Don’t pass up the opportunity to visit! 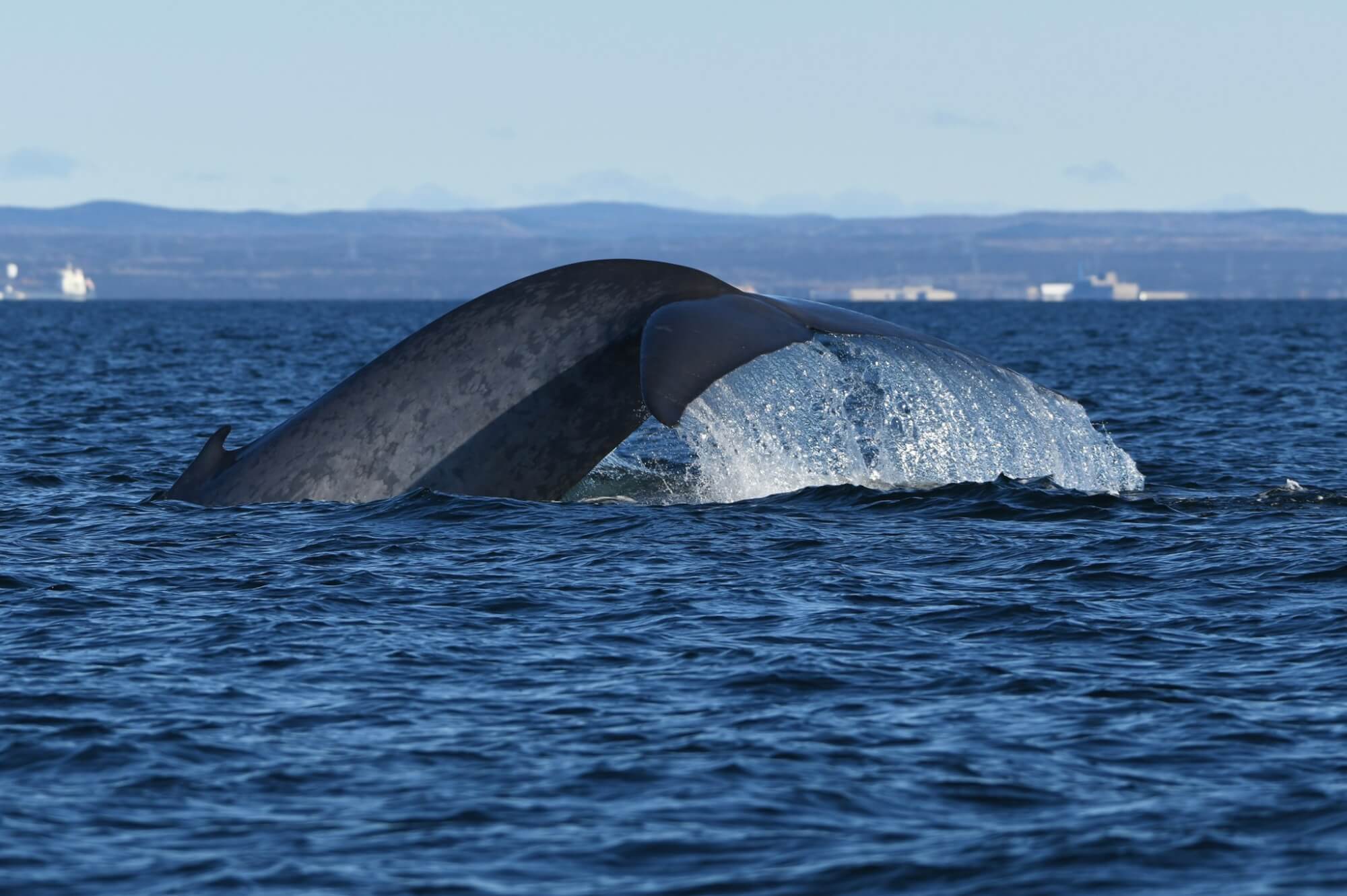 A myriad of white backs

On the other side of the River, in Rivière-du-Loup, an observer spots “a few porpoises far offshore, several grey seals, and good numbers of belugas!” “It’s quite intense; we’ve had belugas almost every day, but it’s starting to thin out a bit,” she emphasizes. The large summer herds are gradually giving way to smaller groups: a nice gathering of females and newborns off Rivière-du-Loup, but also a small group of white individuals off Île aux Lièvres.

Our observer relishes these moments, as she knows that a few weeks from now, the belugas will have left the region. It is assumed that they then head for their winter quarters in the downstream portion of the Estuary and the northern reaches of the Gulf. But the migrations of St. Lawrence belugas are still poorly understood and are currently the subject of a study in an effort to get a better grasp of population movements.

Reports of seals are coming in from everywhere: Tadoussac beach, the rocks near Cap-Chat, off the coast of Sept-Îles and Rivière-du-Loup. In Gallix on September 28, one observer photographed several seals frolicking near the mouth of the Ste-Marguerite River. “Two grey seals and one or two harbour seals,” she clarifies. 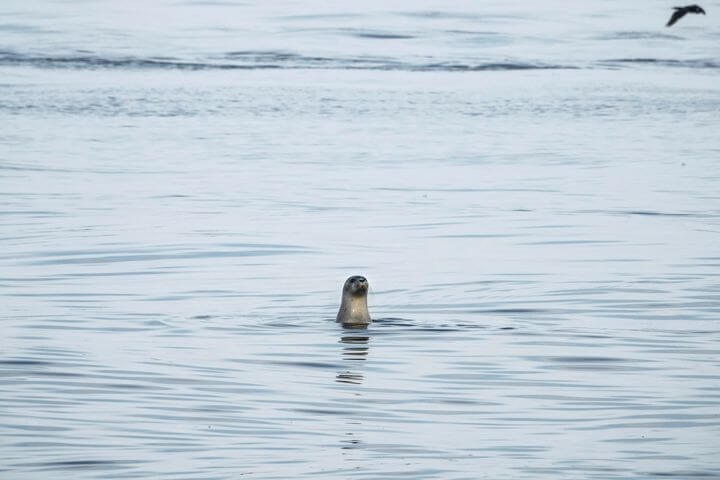 This week, some people have been talking more about the gorgeous autumn weather than about whales. “We’ve had such beautiful temperatures these past few days!” quips one observer based in La Tabatière, who has been unable to set sail for several days. He consoles himself with memories of his most recent trip out to sea, where white-sided dolphins were leaping through the air all around his boat.

In Port-Neuf, Dany Zbinden<, director of the research centre Mériscope, had taken the boat out of the water for repairs. “With the winds we’re having today, we haven’t yet been able to get back out on the water. But we only have a few weeks of work left before winter…”

Out in the Gaspé, another observer set out to sea despite the unfavourable conditions, but returned empty-handed: “I travelled 80 km between Matane and Les Méchins via Cap à la Baleine, and not a single marine mammal!” he says in disbelief.

Even birders were inconvenienced by the weather. “We’ve had southerly winds for several days, which brings migration to a halt,” explains Jessé Roy-Drainville, observer for the Tadoussac Bird Observatory. It takes a northerly wind to help the birds fly south. And then the warm weather last week brought out lots of insects, much to the delight of small insectivores. These birds thus preferred to forage rather than migrate.” Our collaborator Laetitia Desbordes was lucky enough to spot a black-headed gull on the beach in Tadoussac: “It’s an unusual species for the region, but one or two individuals are present every year.” Without a doubt, it’s was a good week for rarities. 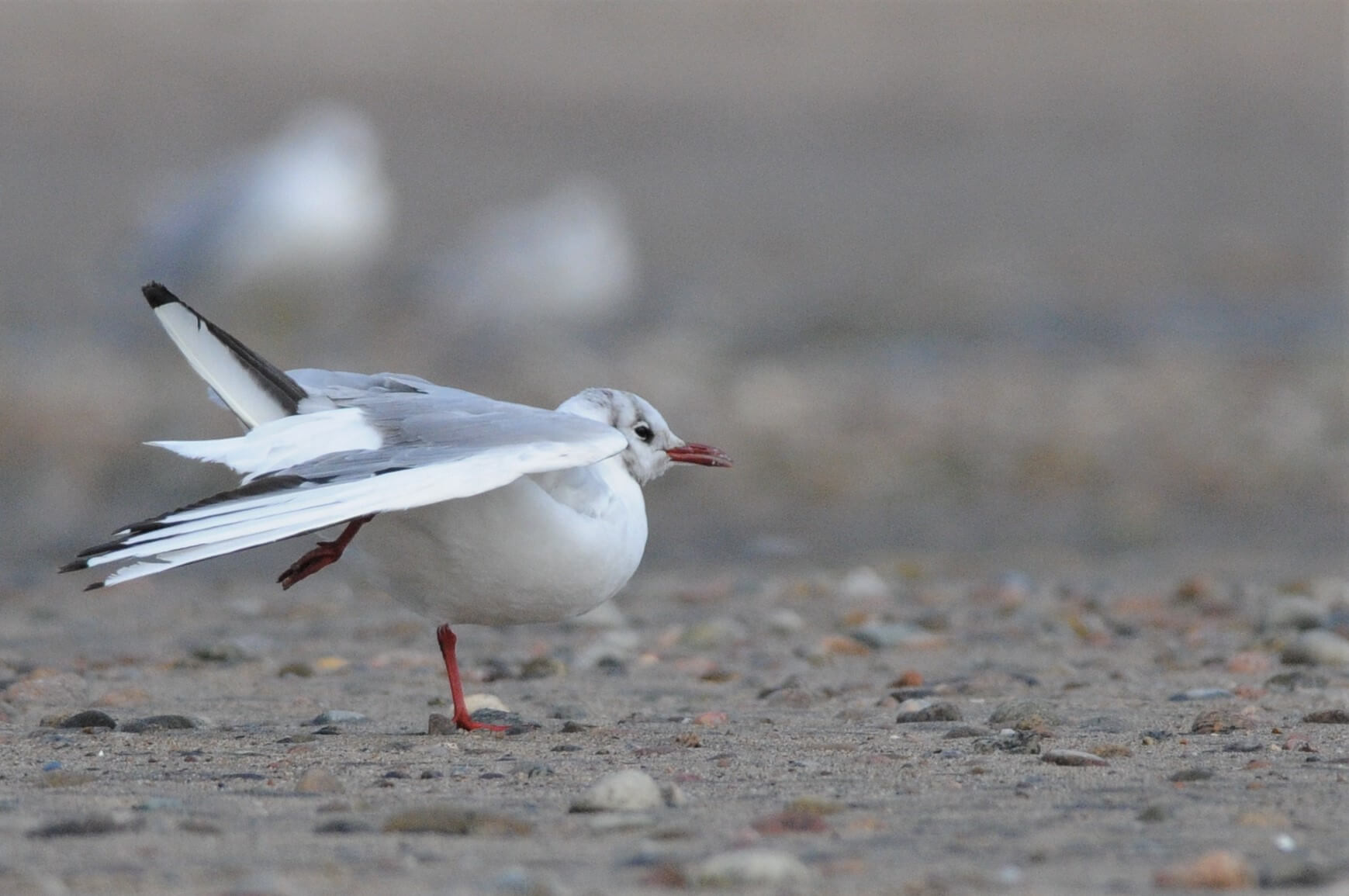