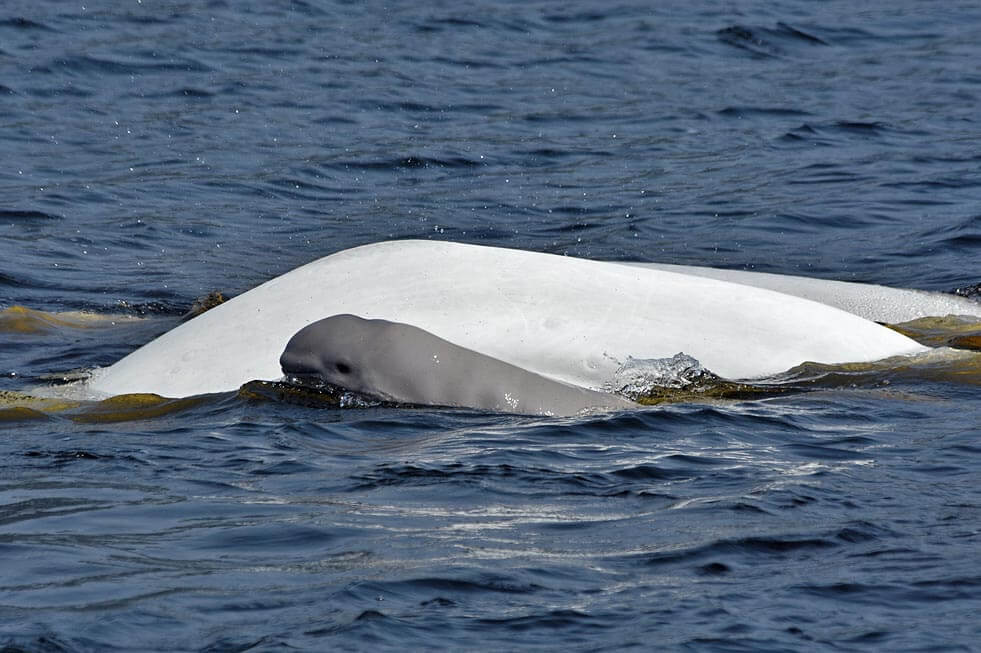 Scientists are concerned: not only have the federal and provincial governments been slow to implement a recovery strategy for the St. Lawrence beluga, but several port development projects planned as part of the infrastructure program announced by the federal government and Quebec’s Maritime Strategy are likely to increase marine traffic in the critical habitat of this endangered species. To convey its plea for urgent action to protect this species, the Group for Research and Education on Marine Mammals (GREMM) decided to offer our provincial and federal leaders each with an adopted beluga.

Delphi and Leucas: these are the names chosen by scientists for the belugas they have entrusted to Prime Minister Justin Trudeau and Premier Philippe Couillard, drawing from the beluga’s scientific name, Delphinapterus leucas. Delphi is a female and is expected to give birth to her first calf soon. Leucas is a male and devotes his time to consolidating his social network. Both are under 20 years old and, if we share the St. Lawrence with them well, they could live until 2080! Their health and survival depend on the choices we make today.

The St. Lawrence beluga population is declining and, since 2010, we have been observing an unprecedented rise in mortality in pregnant females and newborns. According to scientists who have been studying belugas for some thirty years, our short-term efforts should be focused on eliminating stressors such as anthropogenic disturbances in sensitive areas. Increased noise levels in habitats frequented by females with their offspring may be impeding the population’s recovery, and could even be accelerating its decline.

While the federal and provincial governments have committed to protecting critical beluga habitat and creating marine protected areas, concrete solutions are slow to take shape, while port development projects in Cacouna and the Saguenay are proceeding quickly and may conflict with these conservation objectives.

“It would be unfortunate to make this an issue of belugas vs. economic development. Further, it would be especially dangerous to address this issue in a piecemeal manner, project by project. Just like economic development, beluga protection requires a strategy. Otherwise, as so often happens, our economic development strategies will prevail over our recovery strategies for species at risk,” writes Robert Michaud, GREMM scientific director in his open letter to the Premier and Prime Minister.

According to Mr. Michaud, creating a network of acoustic shelters within the boundaries of the current Saguenay-St. Lawrence Marine Park and surrounding areas could be effective in protecting belugas. He requests that the two governments, as they did when they created the Saguenay-St. Lawrence Marine Park, work together and without delay to establish these acoustic shelters that Delphi, Leucas and their families so urgently need.

On Adopt a beluga:

Delphi – Entrusted to the Honourable Philippe Couillard, Premier of Quebec

New investments in the St. Lawrence: opportunity to reconcile conservation and development?

In the media (articles in French have not been translated):