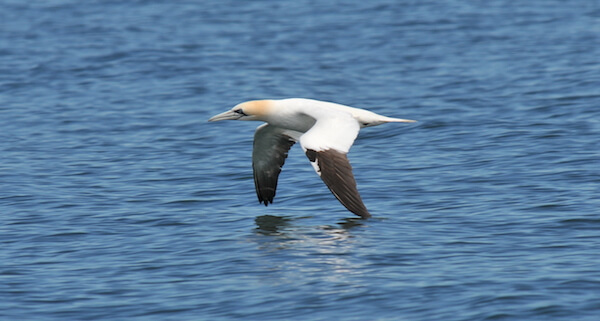 A herd of belugas are swimming in tight formation off Pointe-aux-Outardes; they number about 40. Behind them, flocks of birds take flight near a fishing boat, with wind turbines spinning in the background. One observer sends us a video – filmed using the digiscoping technique, which consists of attaching a digital camera to the eyepiece of a spotting scope – to share an overview of his experience with us.

Seeing belugas off Baie-Comeau is unusual, especially in summer when the animals are concentrated in the Estuary between Île aux Coudres and Forestville on the north shore and Île du Bic on the south shore, as well as in the Saguenay Fjord. However, in the spring, their distribution is more extensive, i.e. from Île aux Coudres to the north shore of Chaleur Bay. Almost every day, GREMM researcher Janie Giard spots herds of belugas off Les Bergeronnes. While belugas are rather easy to observe in the downstream portion of the Estuary, sightings upstream are somewhat rare. An observer from Saint-Irénée in Charlevoix, accustomed to seeing belugas in the spring, is intrigued by this absence.

Also in Baie-Comeau, a resident points out the presence of a minke whale and some fifty or so gannets. In Les Bergeronnes, a naturalist also reports observing these majestic birds. With a wingspan of up to two metres, they are the largest seabirds in the North Atlantic.

This time of year, they make their way from the southeast coast of the US to nest on the islands and rocky escarpments of Newfoundland and the Gulf of St. Lawrence. Bonaventure Island, off Percé, is home to the largest gannet colony in the world, with more than 100,000 birds! It is not unusual to see northern gannets off the North Shore or Lower St. Lawrence regions in the middle of summer, far from their known nesting sites. If they are forced to travel so far to feed themselves and their young, it is because their main prey, mackerel, is believed to have significantly declined in the Gulf, possibly due to a rise in water temperatures.

Northern gannets are master hunters. After spotting their prey from the air, they plunge into the water (to depths of between 7-10 m) after performing, with their wings tucked behind them, spectacular dives at breakneck speed (between 70 and 110 km/h). They thus contrast with the frenzied flight and clumsy look of razorbills, also seen in Les Bergeronnes this week, not far from the gannets.