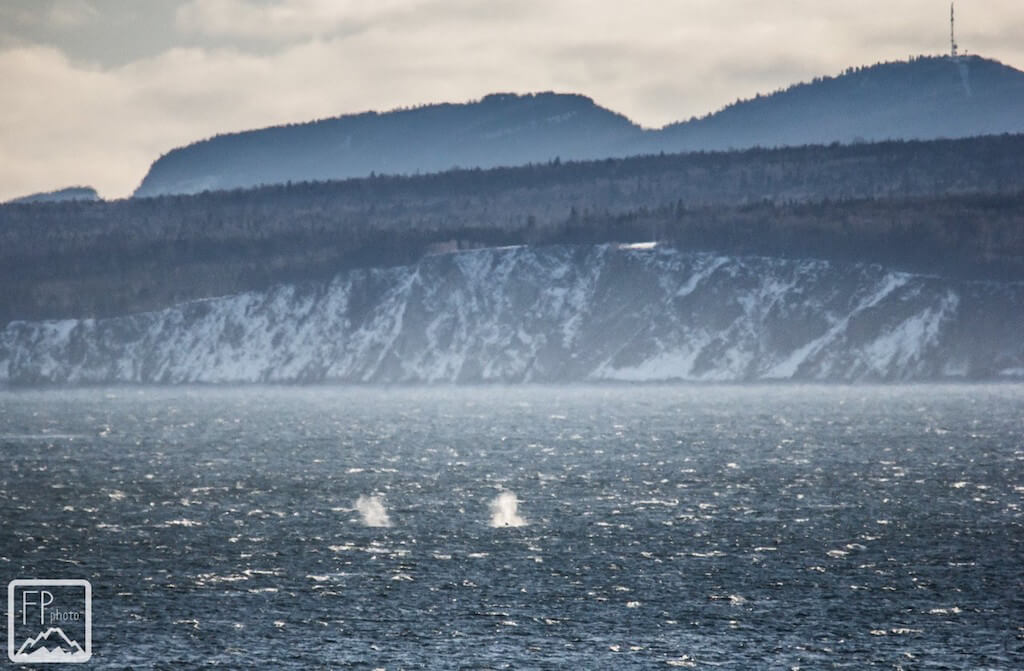 December 8: Gaspé Bay is glowing in the sun. A balloon-shaped spout erupts from the water surface, followed by a second one. Two black backs swim side by side. A black and white tail appears, then another. “I think they were humpbacks,” says one observer,” since I could see their tails and the spouts were low and wide.” An innkeeper also spots these two whales the same day from Cap-aux-Os. Even a photographer manages to capture their exhalations that light up the horizon.

The day before, on December 7, an observer spotted two humpbacks and a minke whale off Cap-des-Rosiers. “They’re moving downstream, not toward the Gulf,” she points out. Are these two whales the same ones seen in Gaspé Bay? Have they changed direction? Maybe. Another balloon-shaped blast typical of humpbacks is observed from Cloridorme on Saturday.

Between Baie-Comeau and Franquelin, a tall column-shaped spout rises above the sea. For nearly two hours, the observer admires the animal’s comings and goings. Fin whale or blue whale? At this distance, it’s impossible to say for sure. A blue whale’s spout can rise up to six metres in the air, while that of the fin whale will measure between four and five metres. Nevertheless, it takes a sharp eye to differentiate them. The same day, the observer notes two minke whales on the move. “I also witnessed a large herd of seals pass by. There were probably a hundred or so individuals. It was very impressive,” she exclaims. She was unable to identify the species, seeing only their heads darting over the water during their dynamic swim.

In Saint-Simon-sur-Mer in the Bas-Saint-Laurent region, a large group of harp seals bask on the ice that has been forming over the past few days. “Is it unusual to have so much ice so early in the season?”, asks the resident, surprised to witness this spectacle in early December. Peter S. Galbraith, research scientist with DFO’s Maurice Lamontagne Institute, takes a stab at the question. Looking at the change in ice cover over the past 30 years, he found that some areas are normal this week, while others are freezing early. For Chaleur Bay and New Brunswick, coastal ice formation is normal, as is ice in the Upper Estuary and Lower Estuary. “What’s higher than normal is the ice in the middle of the Estuary such as around Rimouski,” he explains.

For seals, ice provides additional space to rest. For whales, it can represent obstacles if the cover is too great. For observers, the ice that carpets the St. Lawrence is a work of art, a feast for the eyes.