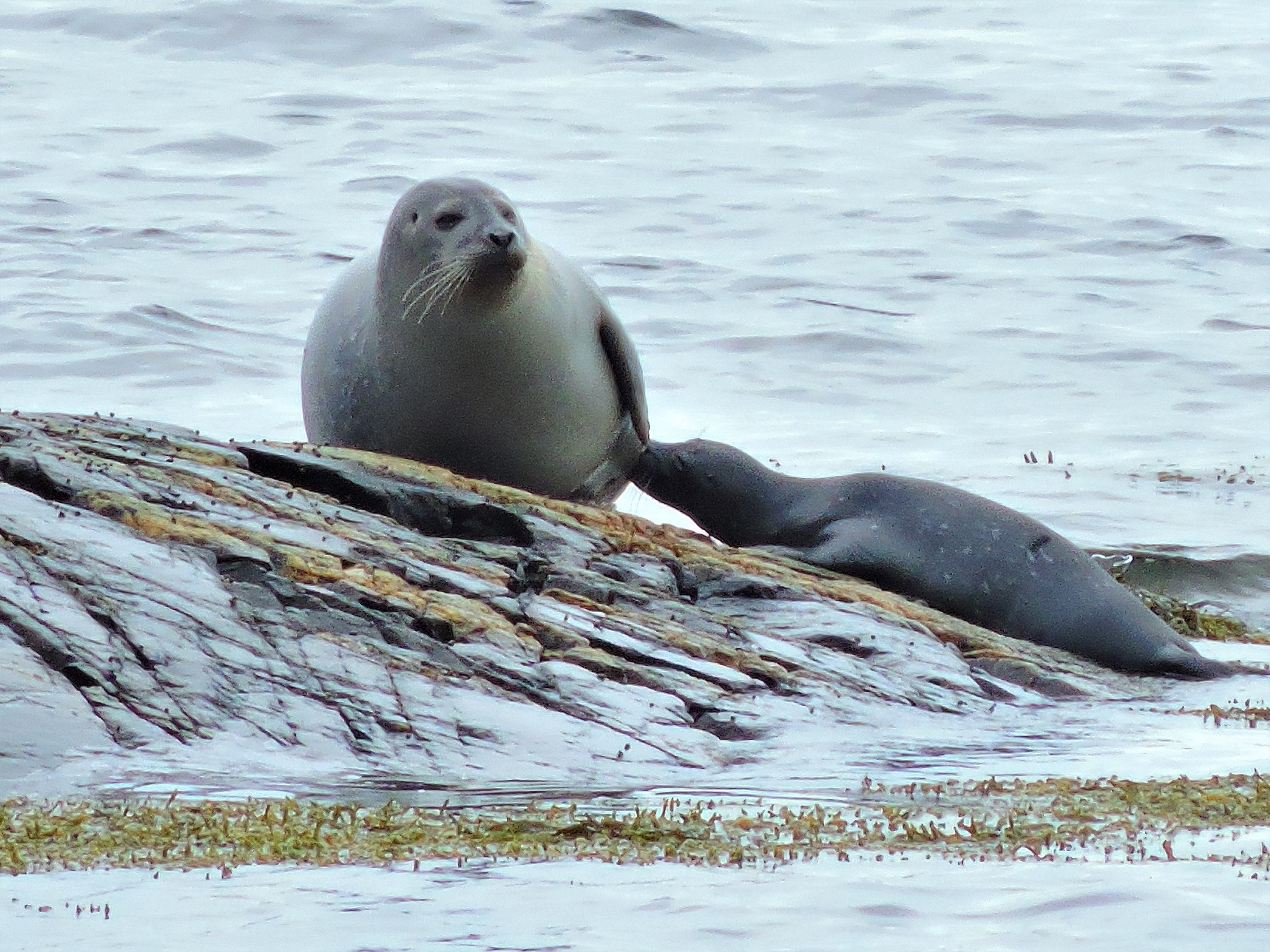 While some observers, with their eyes glued to the water, are thrilled to see the white backs of belugas and black ridges of minke whales, others are excited to observe the presence of seal pups during their strolls along the shoreline. Indeed, the harbour seal pupping season is in full swing!

Females of this species give birth between mid-May and mid-June along the Canadian and US coasts. The pup, which weighs around 10 kg, is able to swim alongside its mother from the time it is born. Mother seals nurse their offspring for 4 to 6 weeks. On May 25, this tender moment of maternal care is captured by a photographer based in Baie-Sainte-Catherine. “They were on the rocks near the wharf. I was very lucky to be able to observe and photograph them from a distance,” she says.

Other observers are concerned when they come upon a solitary young seal. Not to fear! To hunt more effectively, female harbour seals prefer to temporarily leave their young on land. It is a vulnerable time for young harbour seals, and it is important to give them plenty of space so that they can rest in peace. If you think action might be required, call the Marine Mammal Emergencies hotline at 1-877-722-5346.

Seals of various shapes and sizes are found throughout the St. Lawrence. And they seem to be enjoying the spring sun. On May 26, we were notified of about twenty basking on the rocks between Saint-Ulric and Matane. Also, our collaborator René Roy reports a large grey seal, which seems to have taken up residence on the rocks near his home in Matane. On May 25, an observer tallies ten harbour seals in Pointe-Saint-Pierre and enjoys watching a solitary seal loafing on a rock in Gaspé Bay, surrounded by ducks. 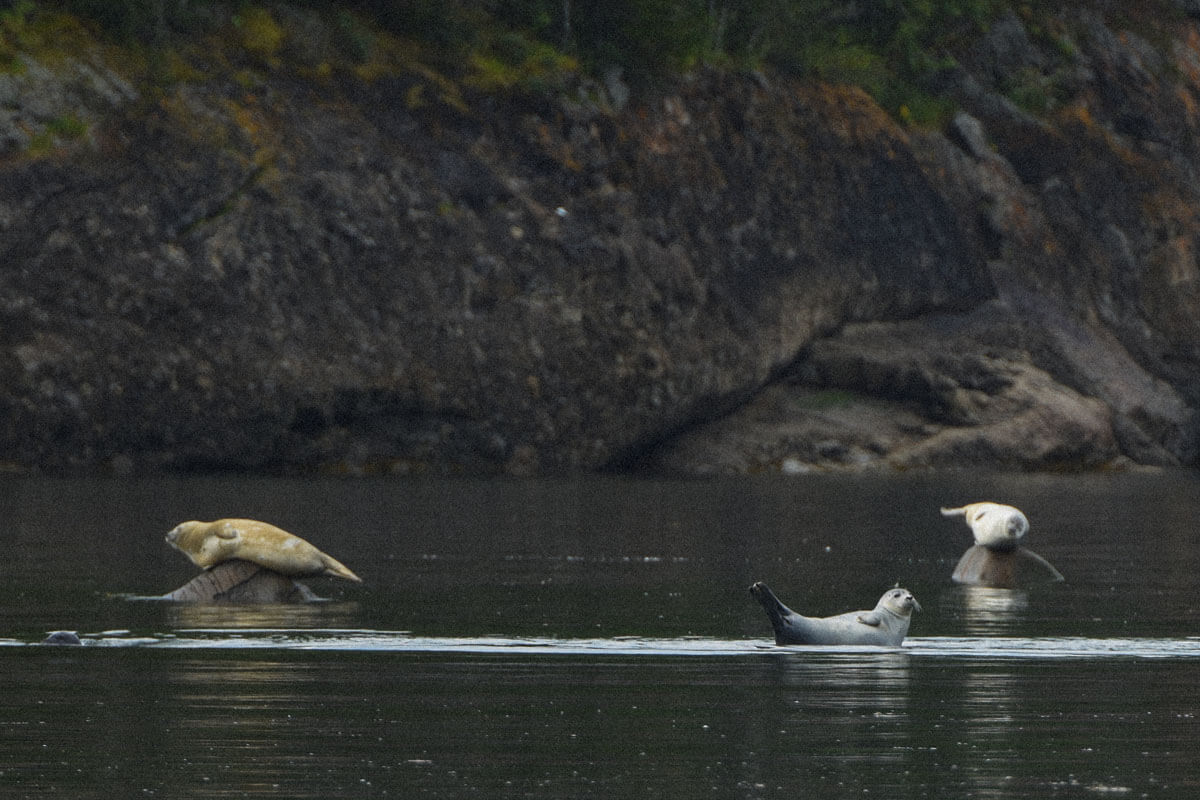 From Île aux Lièvres, photographer Éric Deschamps regularly sees dozens of belugas pass by in a back-and-forth ballet. Farther south, an observer in Isle-aux-Coudres states: “It’s always the same pattern: we see them swim upstream with the rising tide, then return in the opposite direction when the tide goes out. Some days there are groups all across the St. Lawrence and the entire length of the island. It’s a real pleasure to observe them and hear them breath.”

Between these two islands, in Saint-Irénée, a local woman marvels at these regular comings and goings. “At the moment, they always swim past between 6 and 8 in the evening, right at happy hour! It looks as if they’re coming to greet us.” On Sunday, May 23, it’s a small group of fewer than ten individuals. Same thing on Tuesday, May 25. “They bob up and down on the surface like beautiful white balloons,” she describes.

On the evening of May 23, off Cap de Bon-Désir, a couple observes a white back that appears to be all by its lonesome. “Aren’t belugas social?” they wonder. In fact, even if belugas are animals with very rich social lives like us, it is not uncommon to see individuals swimming alone. In the “fission-fusion” system that characterizes their herd dynamics, belugas regularly switch from one group to another and, when between two groups, can sometimes appear alone. “There are also individuals that, for one reason or another, are clearly alone more often,” points out GREMM’s scientific director Robert Michaud. For example, this is the case of Yogi, a female that is rarely seen swimming with other females, even when she is accompanied by a calf. Or the case of Néo, a beluga that suffers from quite severe lordosis. 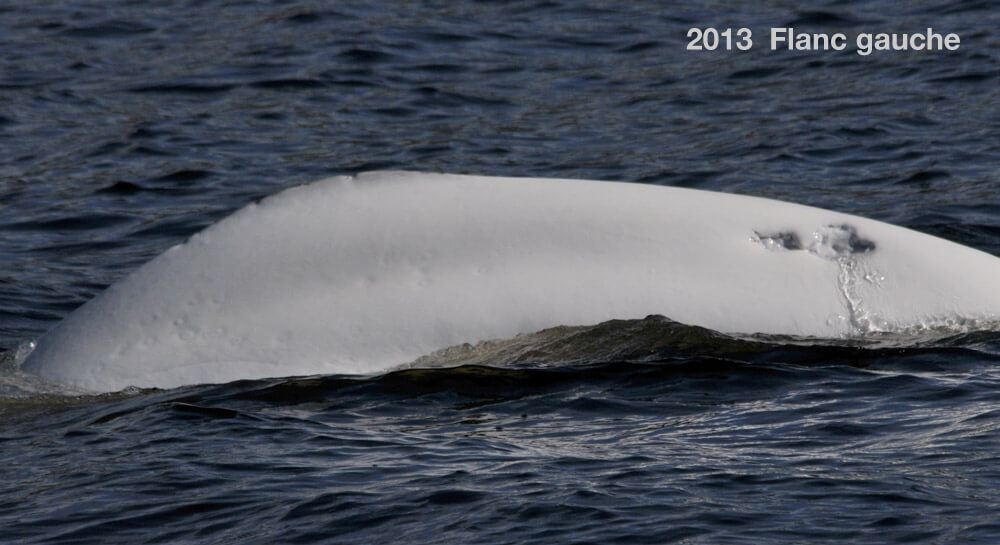 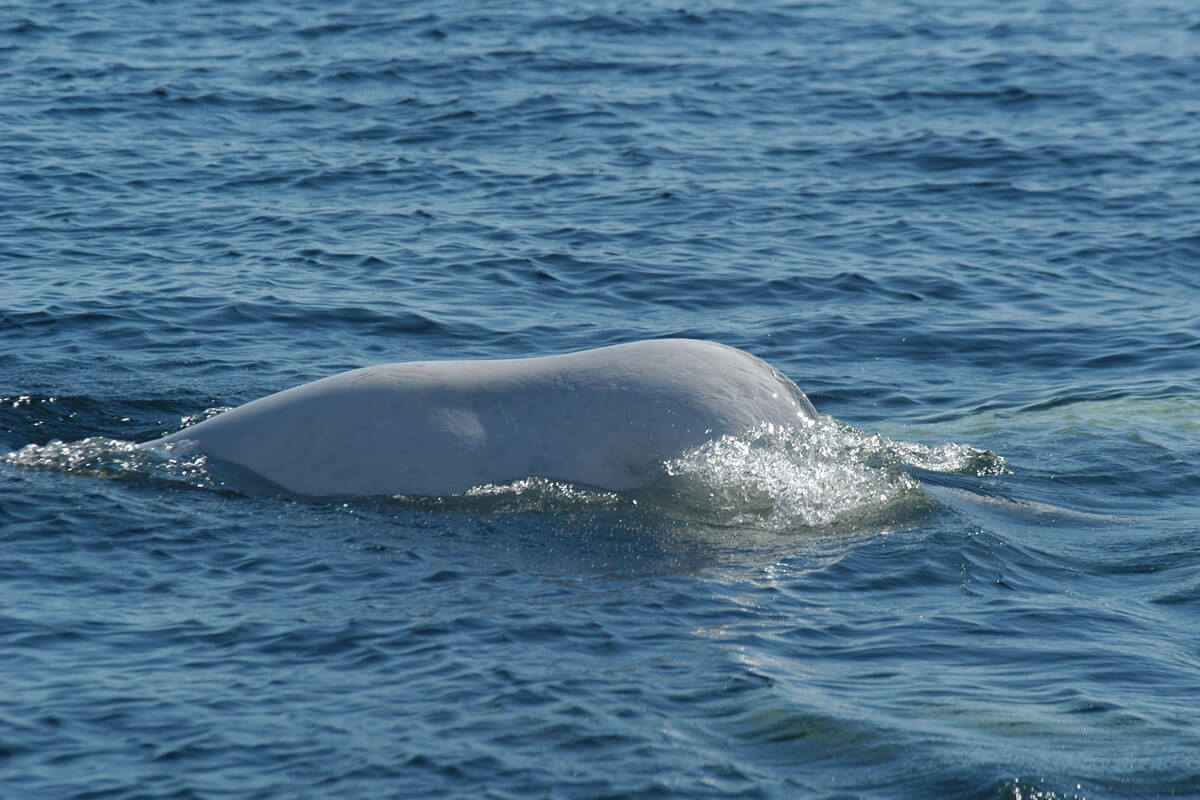 The beluga nicknamed Néo is a loner, perhaps on account of his handicap. © GREMM

Moreover, on May 24, our observer from Isle-aux-Coudres reports having seen a beluga with a pronounced deformity in the rear part of its back. “It should be easy to recognize,” she suggests. However, besides Néo, there are a number of other oddly-shaped belugas: Scolio, Pascolio, Dimitri, etc. These deformities can be the result of a trauma, nutrient deficiencies, or they can be congenital, meaning the beluga was born with a deformed spine.

Dark backs few and far between

Minke whales continue to be present, probably thanks to the abundance of capelin near the coast. Jacques Gélineau reports “probably about ten minke whales” in the area of Sept-Îles, “but not a single large whale.” On May 23, a GREMM employee spots a minke whale near Anse à la Barque. The next day and a little farther up the Saguenay, a local woman is surprised to see a small black back.

The only big blast reported this week comes from Les Bergeronnes, where, on May 22, our photographer friend Renaud Pintiaux had the pleasure of spotting a fin whale swimming in a tide rip. The animal is very far away and, unfortunately, the photos are not sharp enough to identify the individual.

Identifying an animal based on a fleeting glimpse is always a challenge. On May 21, a ferry worker spots a dark shape in the water the size of a beluga, near the docks in Saint-Joseph-de-la-Rive. The description is not detailed enough to determine exactly which species it is. Perhaps a small minke whale? A stray pilot whale? Even if some hypotheses seem more probable than others, this sighting will undoubtedly remain a mystery. Such enigmas are another reason we love watching whales so much! 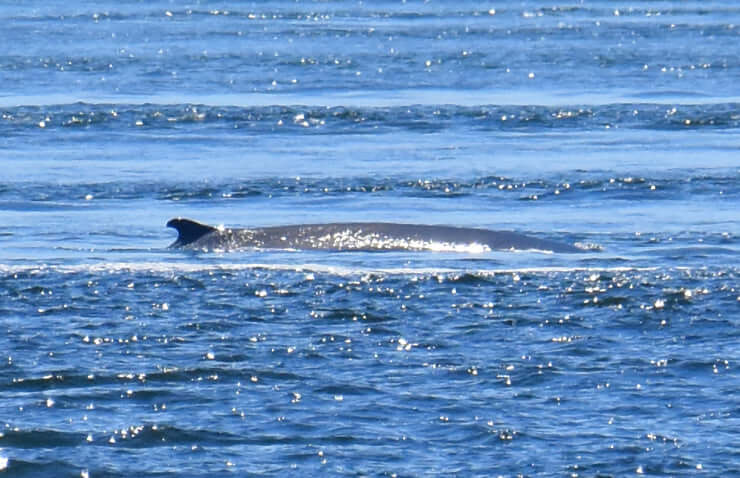