With the belugas… at full throttle! 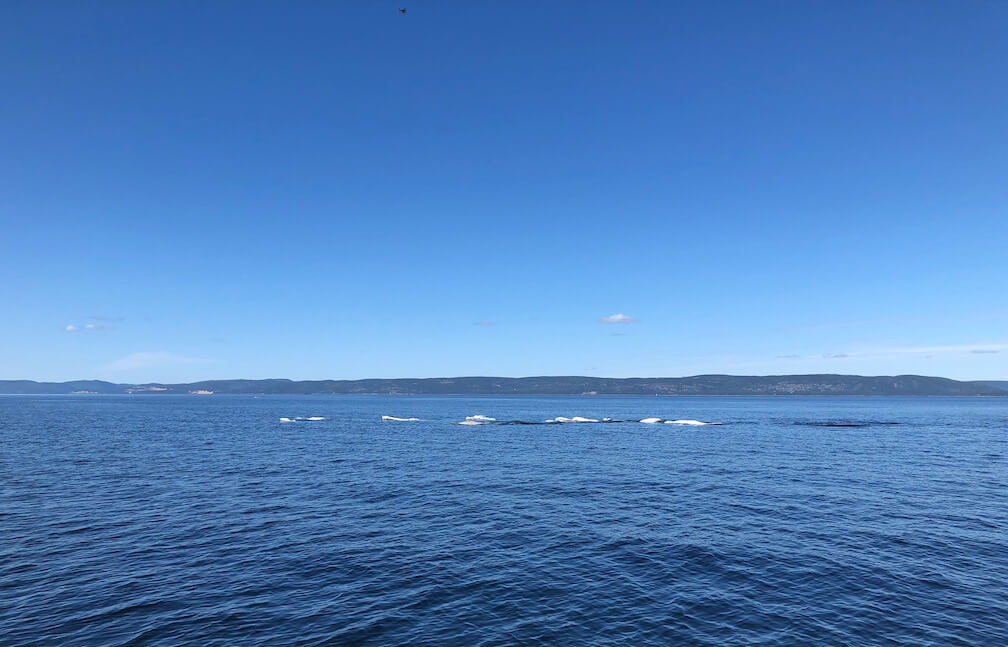 Clear blue sky, low winds, calm sea… The perfect conditions for a productive day of photo-identification and photogrammetry. All we have to do is find some belugas. We thus head out to sea aboard the Bleuvet.

It only takes a few minutes for a herd of belugas numbering about thirty individuals to appear around us, at a safe distance. We decide to embark on our research efforts with a small group. Drone operator Albert Michaud installs his equipment while captain-for-the-day Timothée Perrero positions the boat. Sophie Bédard climbs onto the roof and starts taking down data using a voice recorder: composition of the group, swimming speed (very active), distance, etc. Everything is in place, and Timothée slips on a helmet and leather gloves to handle the drone. One wrong manoeuvre could lead to serious injury: all precautions are necessary!

Once the drone is in the air, Timothée hurries back to the wheel to reposition the ship. Sophie photographs the flanks of the belugas who are simultaneously captured by the airborne drone. The belugas are moving quickly, meaning we have to be extra efficient to keep up with them. After about a half an hour, we lose track of the group. Albert brings the drone back on board, Timothée puts his gear back on to catch the device and we record the flight data.

Where to now? Just as we ponder this question, a Parks Canada research boat informs us that a large herd is midway between Les Escoumins and Les Bergeronnes. We set out in search of these animals, passing by a few groups of fin whales and humpbacks without stopping. When we finally reach the location of the belugas, the sight is one to behold. About 150 belugas are swimming in small groups one behind the other. “I’ve never seen that, a stream of belugas like that in such large, tight clusters and so dynamic!”, exclaims Timothée. The belugas are all vigorously swimming in a single direction, the same as that of the previous herd.

Once again, we launch the drone. Amongst the belugas, a minke whale blows, and a few grey seals are spotted here and there. The belugas continue on their way and we follow them, almost all the way to Tadoussac. For nearly two hours, we photograph the belugas to record their body size and identify them. Later the wind forces us to bring the drone back on board. We turn off the engines while we grab a quick bite to eat. Following this short break, we try our luck in the Saguenay, where we expect the winds should be lighter. Just beyond the ferry crossing route, we encounter adult belugas accompanied by young greys and newborns. The herd is quite scattered and it is rather difficult to predict where they will go. We continue farther upstream, where we again encounter a group of belugas that seem to be in a hurry to go somewhere. Is it the same herd we encountered early that morning? At the speed they’re swimming, it’s hard to say. Photo analysis may provide some answers to this question. 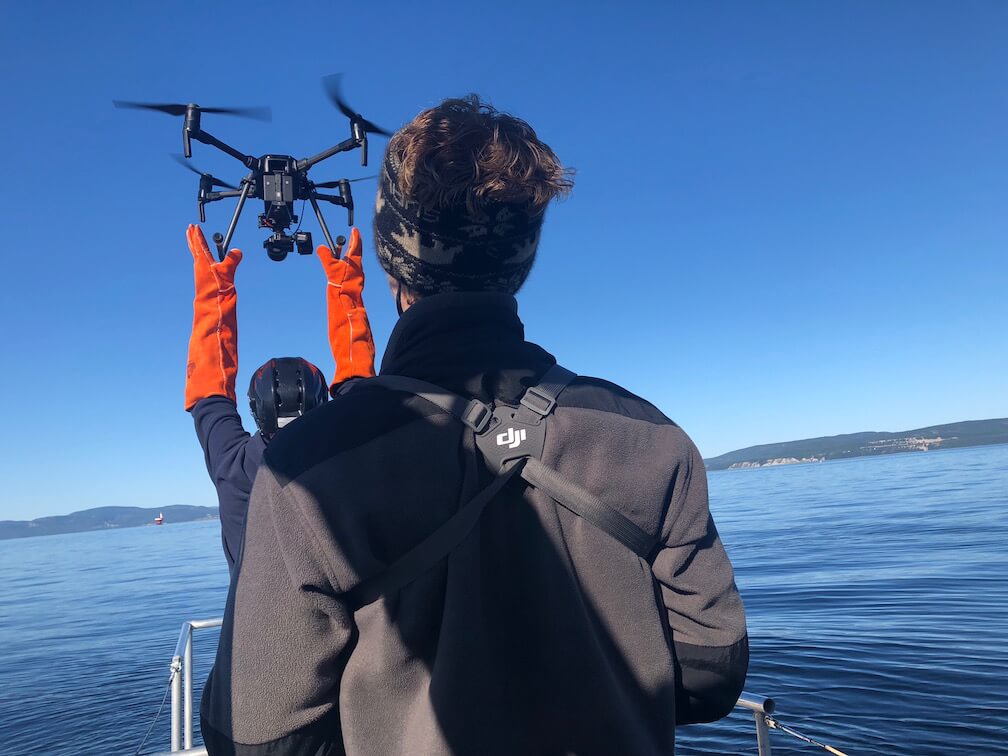 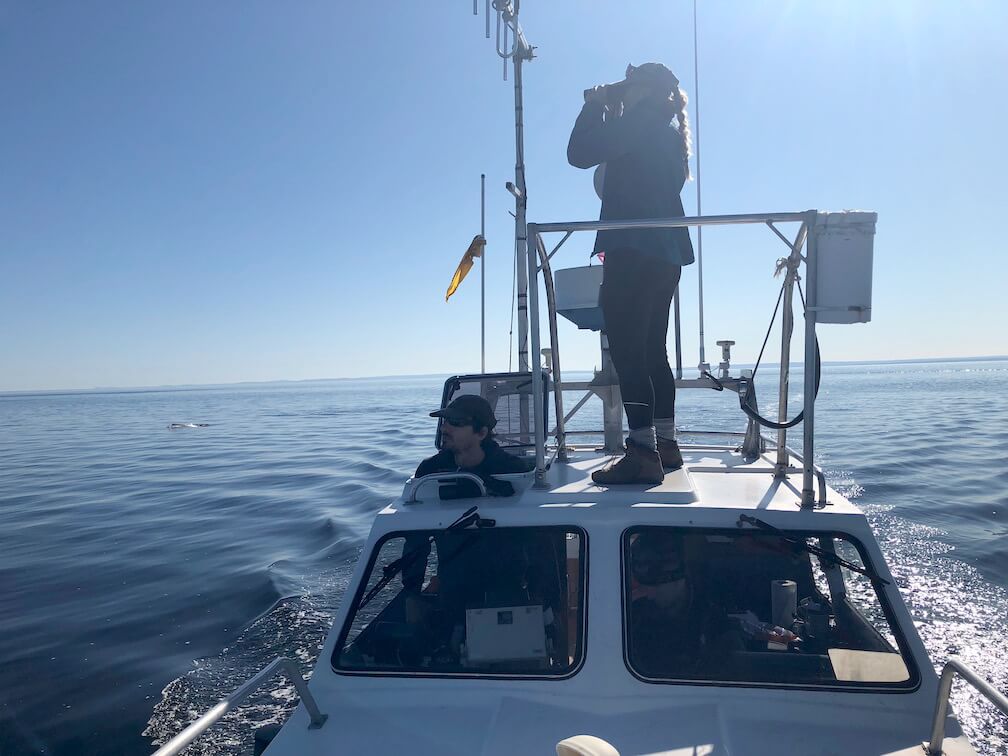 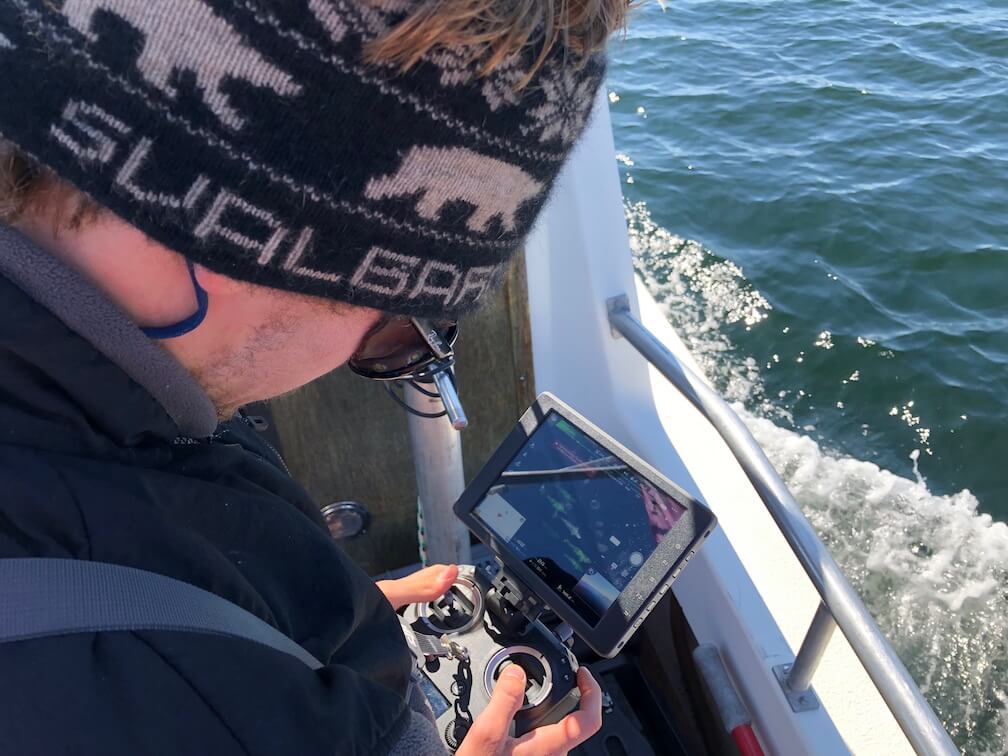