Autumn is for Humpbacks 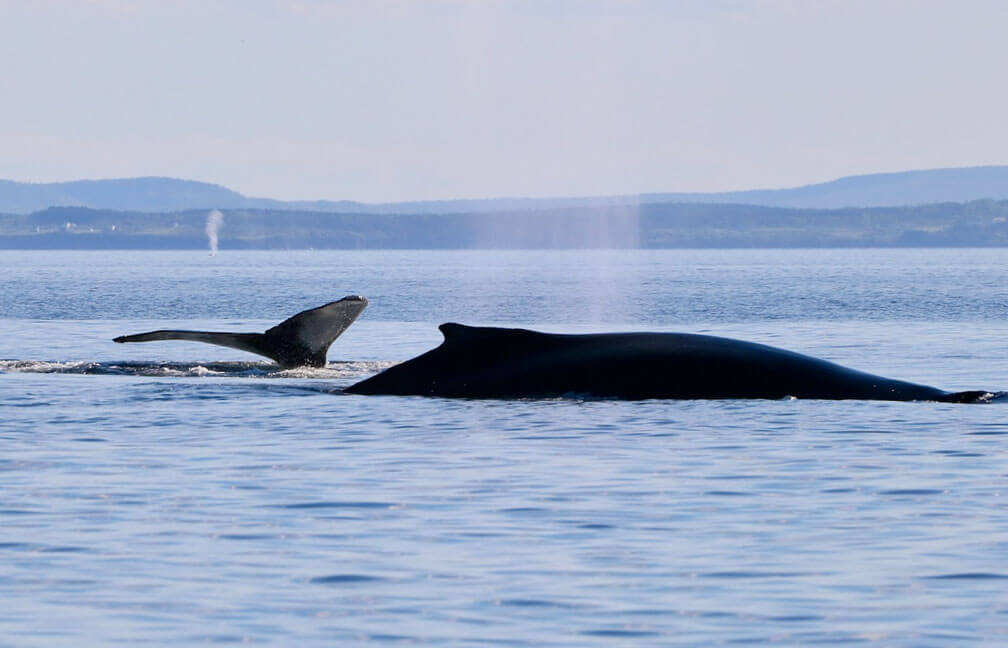 Seven black-and-white tails rise into the air one after the other before disappearing into the dark river. “It’s a ballet of tails,” exclaims GREMM’s lead naturalist on September 28. Another twenty or so humpbacks feed between Tadoussac and Les Escoumins. “Autumn is humpback season!”, confirms a naturalist working on a cruise ship plying the waters of the Saguenay-St. Lawrence Marine Park. Fin whales, minke whales, harbour porpoises and belugas are also seen, both on the water and from shore.

In Gaspésie too, humpbacks continue to thrill observers. “I have one right in front of me!” exclaims one observer residing in Pointe-Saint-Pierre. One captain confirms: “The whales are back in Gaspé Bay. There’s a lot of wind offshore, so we are lucky that the whales come into the bay for shelter.” Over the past few days, his passengers have seen fin whales and harbour porpoises, but it is the humpbacks that steal the show. “We saw the humpback Dog Ear on September 28, and on October 1, another humpback was making half breaches and slapping the water with its pectoral fins,” he says.

In the St. Lawrence, humpback whales stockpile as much energy as they can before they migrate. They will join those that feed in the Gulf of Maine, Newfoundland, Greenland, Iceland and possibly even northern Norway. In winter, which corresponds to the breeding season for this species, humpbacks will go without food almost entirely, hence the importance of eating as much as possible while in our waters. 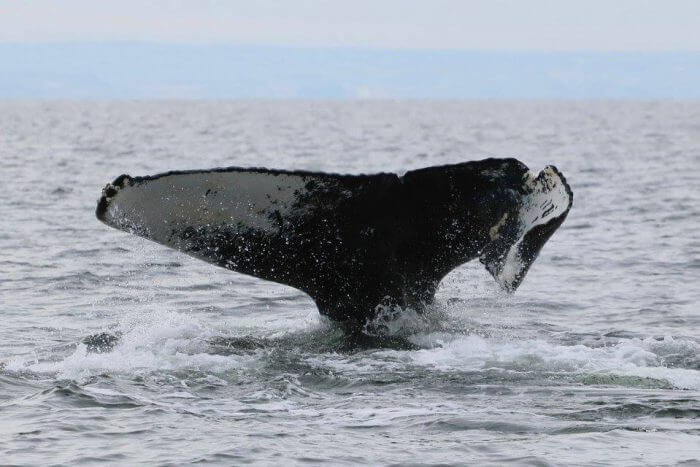 The belly of the minke whale

Although humpbacks are the ones turning heads, minke whales offer dazzling performances on occasion as well. This was the case on September 27 in front of Tadoussac’s Marine Mammal Interpretation Centre. A minke whale fed for about twenty minutes just a few metres from the rocks, much to the delight of visitors. Here is a video of three of the feeding manoeuvres observed.

In the first segment, the minke whale rolls over itself and reveals a white spot on its pectoral fin. Subsequently, we can see its mouth close down on its prey and its belly inflate, followed by a sequence of calm breathing. Lastly, the whale moves away, but its feeding tactics can still be observed.

In the fall, large concentrations of belugas are occasionally encountered. From the Tadoussac dunes, a migratory bird census taker is surprised to see white backs stretching over a distance of about 10 kilometres. He takes a first count, chalking up 98. He tallies them again: 102. And again: 100! “Due to the colour of the water, I saw only the white backs and not the grey ones, so there had to have been more,” he states. On October 1, a hundred or so belugas were swimming westward in small groups of about twenty individuals. A memorable sighting indeed.