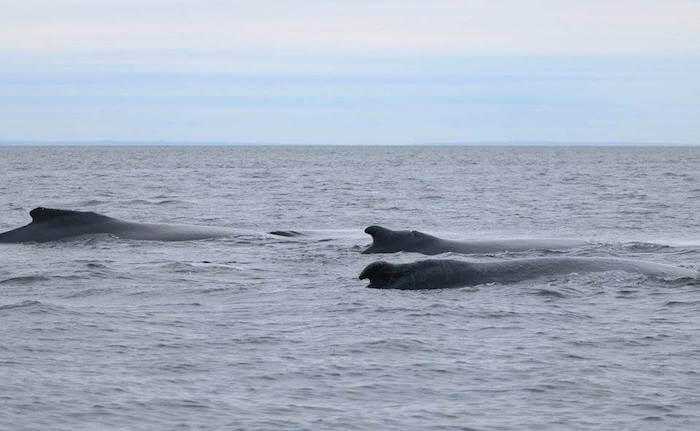 The fall harvest has been bountiful” writes in a St. Lawrence regular, visibly excited following all the large rorquals he has encountered in recent days. “It’s almost better than in summer!” exclaims a seasoned naturalist, untiring of the show that the whales have been putting on in this chilly time of year. Marine mammals have been so abundant and observation conditions have been so pleasant that cruise operators in the Tadoussac region have pushed the end of their offshore activities back one week.

In late October, a collaborator also took advantage of the favourable weather to make two trips out into the Estuary, from Rimouski on the south shore to Betsiamites on the north shore. He was able to observe numerous white-sided dolphins, several minke whales, four blue whales, three fin whales and eight humpbacks. A week later, in the middle of the Laurentian Channel off Colombier, he watched four humpbacks, including the famous Dog Ear, easily recognizable by the folded-over lobe of its tail. This was the first time it was observed in this sector; it is better known for belonging to a group that spends its summers primarily in the Mingan area.

Also toward the tail end of October, a resident of the Manicouagan Peninsula area in the Côte-Nord region reported “twenty or so whales still present, including several humpbacks being seen daily offshore, east of Pointe-Paradis. It’s always a fascinating display to see them lift their tails and I think I can even recognize certain individuals by the white pigmentation on the underside of their caudal fin. I go so far as to imagine that they are greeting me when they slap the water surface with their fins.”

In the Franquelin region, minke whales are making daily appearances near the coast. Also observed were up to four humpbacks in one day on October 28, including one individual that was slapping the surface of the water with its pectoral fins! One web user aroused considerable interest over Halloween weekend with videos showing humpbacks performing full breaches on multiple occasions. She even wrote on her Facebook page, “Heart fluttering, eyes filled with tears of joy… an incredible effect before such a performance… Today, in Franquelin I saw the most beautiful sight of my life from dry land, rather than on the water.” A paddleboard enthusiast, she then set out on the “whale trail”, as she calls it, where she encountered more mellow humpbacks (at least five) and swiftly moving harbour porpoises, in addition to gray seals a little everywhere.

The Tadoussac region has also been host to hundreds of gray seals. We even spotted a few harp seals, a sign that autumn is well upon us. As for cetaceans, five fin whales were meandering this afternoon in the waters off Tadoussac, particularly in the Île Verte area. A rumour was also going around that three humpbacks were swimming off the wharf in Les Escoumins. The one nicknamed “Picotine” was still being seen frequently in recent days between Tadoussac and Les Bergeronnes.

Food seems to be abundant at the surface, as on October 30 one observer reported close to a dozen minke whales actively surface feeding. He adds, “Above these marine mammals, flocks of kittiwakes as well as Bonaparte’s, great black-backed, herring, and ring-billed gulls are also participating in the feast.” On November 2, the autumn sun accentuated the discreet little puffs being blown by belugas, which have been observed daily by the dozen in the mouth of the Saguenay Fjord. They were seen by a member of the GREMM team, now on land for the off-season, from the Marine Mammal Interpretation Centre.