A Week Full of Emotions! 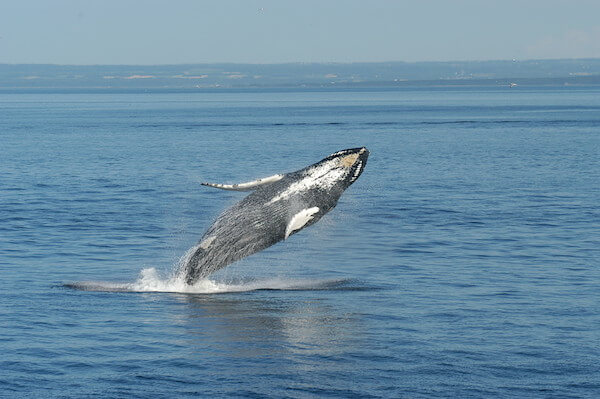 Pairs of harbour porpoises in Franquelin, four fin whales off of Tadoussac, a large rorqual in Baie-des-Sables in the Gaspé and in the Saguenay–St. Lawrence Marine Park, nearly a dozen minke whales in the Estuary, and some one hundred belugas scattered in the mouth of the Saguenay: the numbers are impressive and it isn’t even June yet! But what is especially impressive are these stories of whales that have aroused emotions in a number of St. Lawrence observers.

On 22 May, our collaborator in Baie-des-Sables in the Gaspé wrote, “this morning at 7:45, my first observation of 2016 was a bit frustrating despite my joy of finally seeing my first whale! I would tend to think that it was a fin whale, but the last time it surfaced made me lean more toward a humpback. It was about 1 km from shore… I can’t decide!” The next day, observers on board a cruise ship were excited and moved by the visit of a group of three curious belugas playfully frolicking in the greenish waters of the Estuary, replete with their characteristic “smirks”. A rare visit and an unforgettable moment for many visitors!

Then, in Franquelin on the North Shore, our observer enthusiastically shared her May 25 observation: “For 20 minutes I was able to observe a minke whale breaching repeatedly while feeding! We were even able to see his whole head out of the water! It was quite impressive! This same spectacle was also related by a naturalist who was plying the waters off the Tadoussac dunes. The morning of Friday, May 27, the naturalist declared, “the young humpback was seen offshore yesterday morning, opposite the Centre Archeo Topo in Les Bergeronnes. The funny thing is that it was spotted because it was breaching!” Many individuals also enjoyed the images of the humpback Gaspar who was launching himself into the air in Gaspé Bay a little over a week ago. Then, as we were publishing this news, a collaborator from Gaspé Bay (who was getting ready for the whale-watching season) calls with a palpable joy in his voice and exclaims, “right now, there are three humpbacks 4 km offshore, opposite the Grande-Grave wharf!”