A seventh calf, but not a baby boom

This calving season, 7 newborn right whales have been observed. These births cannot be described as a "baby boom" since they are probably insufficient to allow the population to grow. The calf in this photo is approximately 1 month old. © Florida Fish and Wildlife Conservation Commission, taken under NOAA permit 20556-01

Since the beginning of the right whale calving season, 7 newborns have been observed. Although the announcement of a seventh birth is encouraging, it is unfortunately still premature to talk about a baby boom. Low birth rates have been observed in this endangered species since 2010. Each birth therefore represents a tiny step toward an eventual recovery. But many more births would be needed before we can talk about a baby boom.

Since 2009, only 3 other years have been less productive, with 7 newborns in 2012, 5 in 2017 and 0 in 2018. Moreover, since 2009, an average of 15.4 births per year have been recorded. According to Florida’s Fish and Wildlife Research Institute, a minimum of 16 calves is needed this season for the birth rate to translate into population growth. When the birth rate is too low, it does not compensate for the high mortality rate suffered by the population. Indeed, right whales are particularly at risk of entanglements since they feed at the surface. In 2017, 18 right whale carcasses were found in the North Atlantic, some of which died from collisions or severe entanglement. Caution must be exercised before stating that a change is necessarily significant for population growth. However, right whales still have time to surprise us since the calving season goes until March!

The 2019 season is encouraging compared to 2018, but the birth rate is still below average. Over the past 10 years, breeding seasons have led to more newborns every year except for 2012, 2017 and 2018. The calving season is not yet over, so additional births could still be observed in 2019. Data taken from (2018) Pettis, H.M., R.M. Pace and P.K. Hamilton North. 2018 Annual Report Card. (United States). North Atlantic Right Whale Consortium. 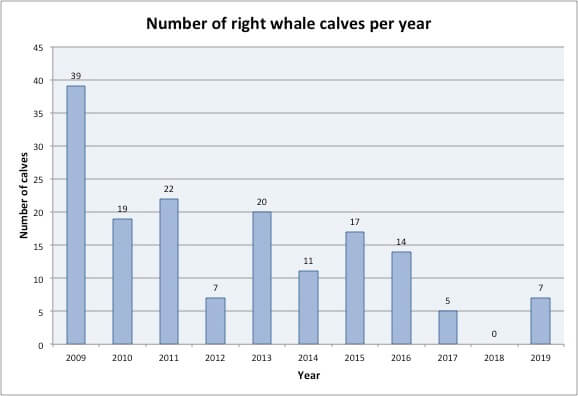 Births in the context of declining fertility

The North Atlantic right whale population is estimated to number 411 individuals. Of these, about 75 are believed to be females of reproductive age. However, in 2018, no calves were observed and only 5 were spotted in 2017. The number of calves observed each year is therefore quite different from what would normally be expected. Between 2010 and 2016, the birth rate fell by 40%. Additionally, the average interval between births for any given female rose from 4 to 10 years. For comparison, this interval is 3 years for the species’ cousin, the southern right whale. The decrease in the number of completed pregnancies and the increase in the number of undocumented newborn deaths are reasons that might explain these unusual intervals.

Pregnancy and nursing are very energy-intensive processes for females, who require access to sufficient food sources to maintain their body weight. Copepods – a favourite food of right whales – are becoming increasingly rare in traditional summer areas between New England and Nova Scotia. This might explain why a growing number of right whales are being observed in the Gulf of St. Lawrence, where these small crustaceans are present. A longer migration means greater energy expenditures for females, which can be detrimental to reproduction. If, despite the odds weighing against her, the female does manage to give birth to a calf, there is no guarantee that she will be sufficiently fit to produce enough milk to feed her offspring. Indeed, studies on the southern right whale have shown that the body volume of lactating females diminishes by 25% in a span of just 3 months.

In recent decades, there has been a correlation between particularly low birth rates and the observation of more injuries and poorer health overall. This suggests that the low birth rate may be related to the frequent entanglements of North Atlantic right whales in fishing gear. This species is particularly prone to collisions and entanglements, as it is a slow swimmer and stays close to the surface. The stress triggered by these events can affect whales’ reproduction or their ability to terminate their pregnancy. Fortunately, these periods are generally followed by a rise in birth rates when health conditions become favourable again.

Further, the low genetic diversity of right whales might be having an effect on their reproductive capacity. Indeed, small populations are particularly at risk when it comes to mating between individuals that are too closely related genetically. Such individuals may be genetically incompatible and produce non-viable fetuses.

The introduction of right whale protection measures in 2018 by Fisheries and Oceans Canada and Transport Canada appears to have been effective. Authorities have identified 3 entanglements and zero mortalities in Canadian waters in the past year, a dramatic improvement compared to the 18 mortalities and 5 entanglements documented in 2017.

We will need to wait a few years before we can determine whether the decrease in mortality and stressful events will translate into higher birth rates. In the meantime, it is hoped that these three births will be the harbinger of a string of good news for the species.