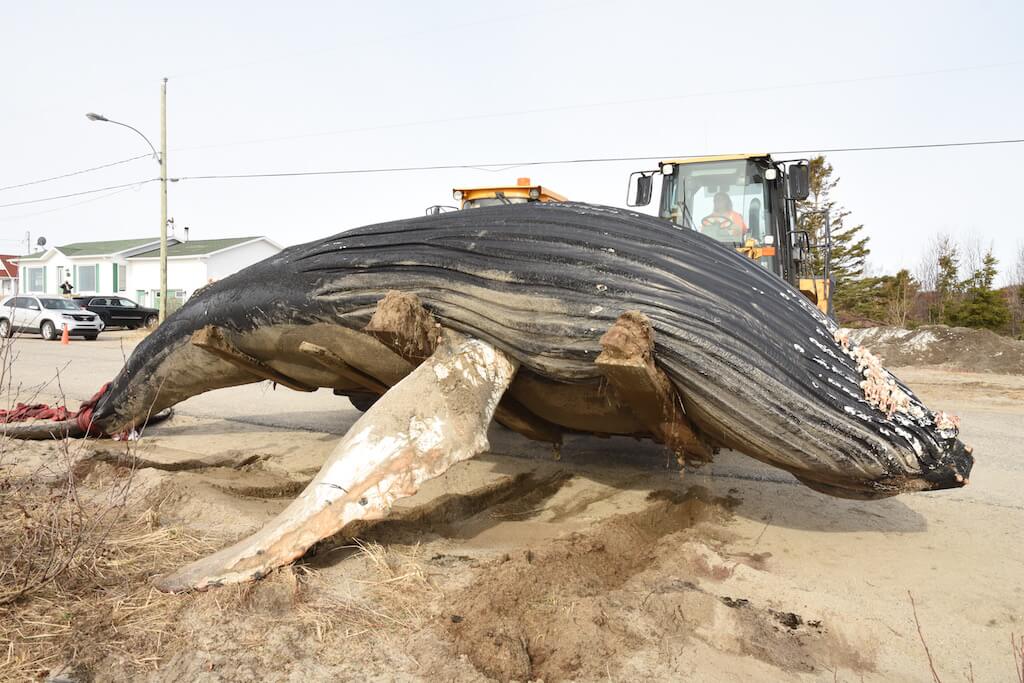 On the shores of the Côte-Nord region, near Godbout, a small humpback whale was reported to Marine Mammal Emergencies on May 3. The 9-metre long, 7.4-tonne whale was of immediate interest to veterinarians, researchers and the team at Tadoussac’s Marine Mammal Interpretation Centre (CIMM), which features a unique collection of seal and cetacean skeletons. In just four days, a massive operation was organized: sampling, transporting the carcass nearly a hundred kilometres, necropsy and flensing brought together a large team of experts and volunteers.

From Godbout, the whale was transported to the Ragueneau landfill site, where the Canadian Wildlife Health Coooperative team, based at the University of Montréal’s Faculty of Veterinary Medicine (FMV) in Saint-Hyacinthe, performed a necropsy to determine the causes of mortality and gather important data on the overall condition of the animal. Then, volunteers and specialists from the Group for Research and Education on Marine Mammals (GREMM) removed the skeleton from the humpback carcass. This young female will have a second life: she will join the marine mammal skeleton collection at the CIMM, in Tadoussac.

Unknown cause of mortality and identity

Not all whale carcasses beached on the shores of the St. Lawrence are subject to such detailed studies. However, when an unusual stranding occurs, special efforts may be made to document the incident. In this case, since it is a young individual (probably less than two years old) belonging to a species whose strandings in the St. Lawrence are rare, Stéphane Lair, consulting veterinarian at the Quebec Marine Mammal Emergency Response Network, seized the opportunity and decided to try to determine the cause of this whale’s death. 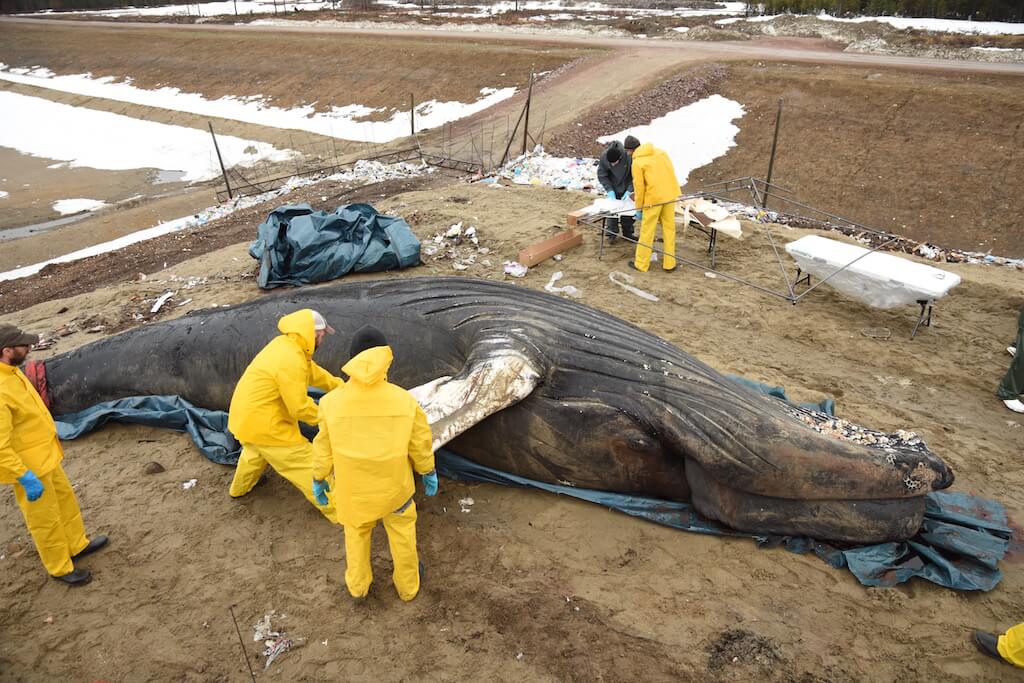 The young female humpback was studied by the team led by Stéphane Lair of the Canadian Wildlife Health Cooperative; the GREMM flensed the whale in order to retrieve the skeleton. © GREMM

Judging by its size, the individual is believed to be between 10 and 14 months old, thus born in the Caribbean in the summer of 2016. The whale’s skin was covered with numerous barnacles, crustaceans that attach themselves to humpbacks during their stays in warmer waters. Stéphane Lair explains that the presence of these organisms is an indication that this individual had arrived in the St. Lawrence Estuary only recently, as barnacles fall off when they come into contact with cold water. Young humpbacks are nourished with their mothers’ rich milk until they are 6 to 10 months old; it can therefore be concluded that this young female was recently weaned.

Dr. Lair also explains that examining the animal did not reveal any significant lesions, thus ruling out the possibility of death due to a collision with a vessel or entanglement in fishing gear. These anthropogenic causes are responsible for more than half of the mortalities in young humpback whales stranded on the North American coasts. It should be noted that the thickness of the layer of insulating blubber under this young female’s skin appeared sub-optimal for the size of the animal. Moreover, only the terminal part of the digestive tract contained digested content, while the remainder of the digestive system was empty, indicating that this whale had not fed recently. These observations indicate that the whale likely suffered from a significant calorie deficit, which might have contributed to its stranding. Laboratory analyses carried out on the tissues taken during the necropsy will allow us to better understand the cause of death of this humpback whale.

We should mention that an “unusual mortality event” of humpbacks is presently being observed along the US coast: 42 carcasses have been found in the past 16 months. Signs of trauma (ship strikes) have been observed in about half of the whales examined. The cause of the other mortalities remains undetermined. According to Stéphane Lair, the death of this young humpback in the Estuary could be related to this unusual mortality event along the East Coast.

As for its identification, the female does not seem to be known to researchers at the Mingan Island Cetacean Study (MICS), which has compiled a catalogue of humpbacks identified in the St. Lawrence. Humpback whales show unique colour patterns on the undersides of their tails that serve as fingerprints; however, the tail pattern of the beached whale could not be matched with any of the catalogued photos.

The GREMM has been interested in whale skeletons for over thirty years. In fact, the original Interpretation Centre established by the organization in 1988 already featured a fin whale skeleton that had been recovered at Montmagny and assembled at great expense! Since then, the GREMM’s expertise has grown considerably. After a weekend of preparation, transportation logistics, purchase and installation of equipment, about twenty people busied themselves with recovering, studying and carving up the whale. Thanks to Marine Mammal Emergencies volunteers, GREMM team members, FMV veterinarians and generous collaborators*, the flesh was removed and the bones were exposed in a single day!

Next steps will include transporting the bones to the 5 Étoiles farm in Sacré-Cœur, with which the GREMM has developed a long-standing partnership for allowing recovered whales to decompose in a safe place, and where a second cleaning can be performed in the months following strandings. The skeleton cleaning and assembly project will commence later this year. The GREMM is currently looking into various funding strategies to give a second life to this humpback. 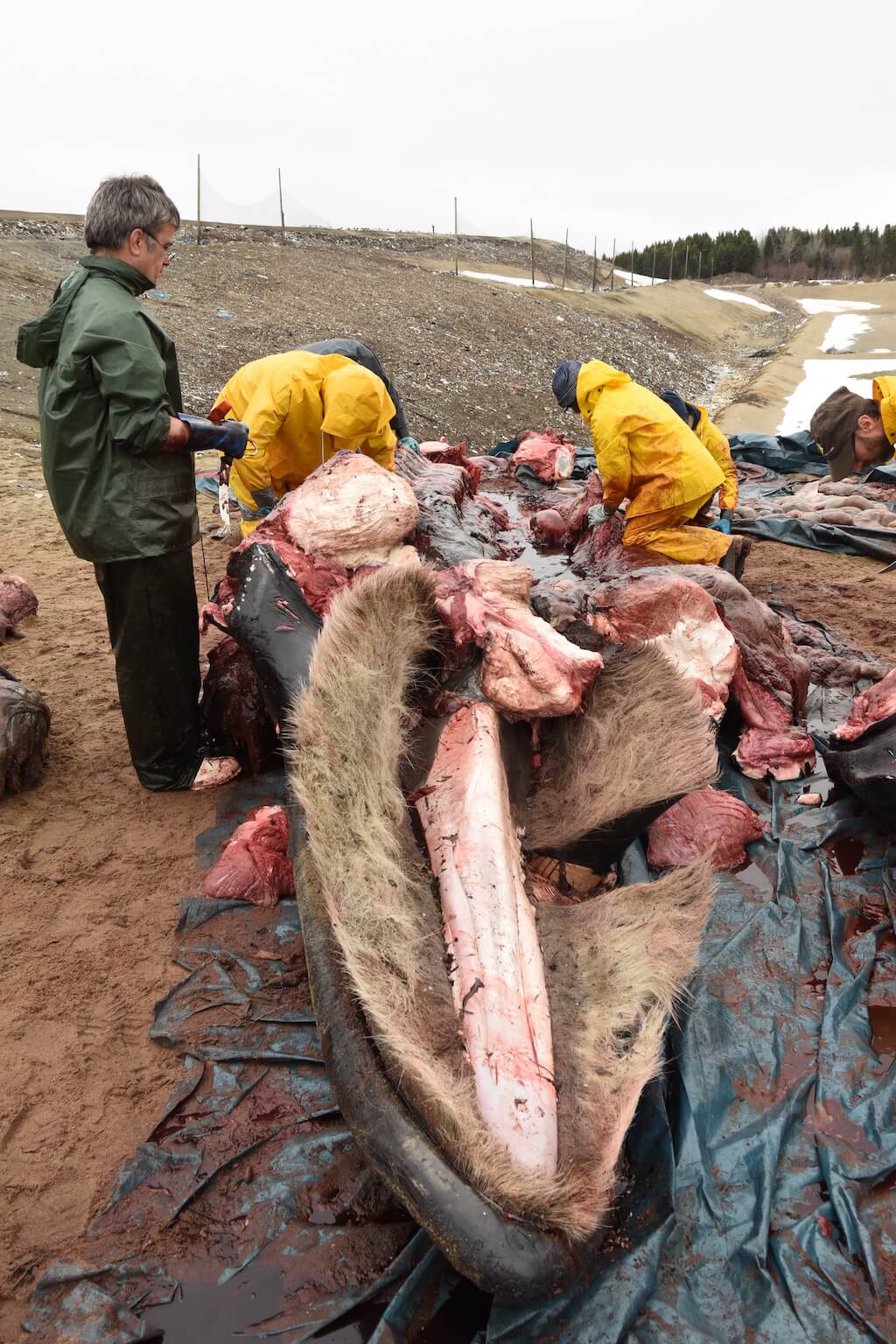 The operation was carried out in record time, with necropsy and flensing being completed in a single day. © GREMM

For more images on the recovery of this humpback, visit the photo album on the Whales Online Facebook page.