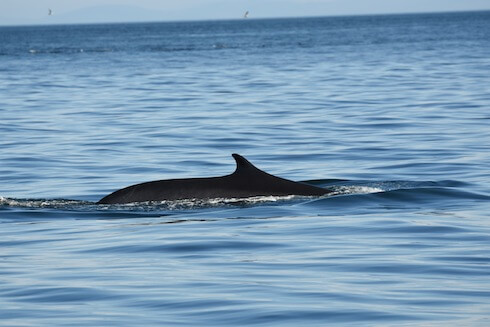 On the afternoon of November 18, a News from Afield collaborator and Gaspé Bay whale-watching employee in summers ends his working day with a walk around this bay. The hike is well worth it! He discovers three humpbacks and two minke whales from Cap Bon-Ami. The animals are quite far from the coast, but through his binoculars, he can make out the backs of humpbacks that succeed one after the other. Their spouts remain invisible.

In the Estuary on November 21, the GREMM team, still on the water for the satellite transmitter project to track belugas over the winter, is surprised to cross paths with several groups of harp seal and the fin whale Orion. Orion is recognized amongst them by the shape of his dorsal fin truncated toward the top and bottom. Since 2012, he also bears a new field mark, a scar on his peduncle which is visible from both sides. The fin whale was identified this summer. On July 29, Orion was marked with a radio transmitter for 40 minutes for the Large Rorqual Telemetric Monitoring Project. In late November of this year, Orion is not the only fin whale present in the Estuary. Two or three other individuals have been spotted earlier this week.

Then, from the comfort of his own home, our collaborator in Franquelin (Côte-Nord region) discovered the presence of minke whales and gray seals near shore this week. The Estuary is an extension of his backyard.