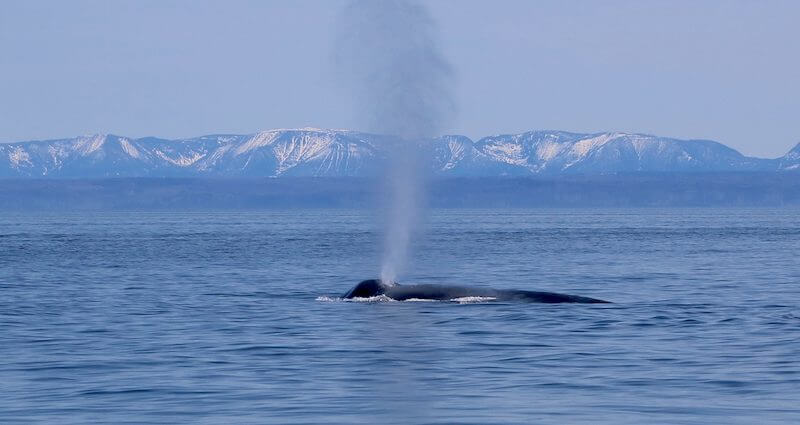 January 12: After weeks of seeing nothing but drifting ice and seals on the move, a large spout draws the observer’s attention. The bluish-grey back, the protuberance around the blowhole and the gigantic size of the animal allow her to identify the species: it’s a blue whale. For several days, the observer has been enjoying the presence of one individual – probably the same one each day – that has at times passed rather close to shore in the Baie-Comeau area. The majestic blue whale is taking advantage of the presence of krill and sectors still mostly free of ice.

“Do the whales get cold in the St. Lawrence in winter?” asks one reader. The question is a valid one when one considers that the surface water temperature in the Estuary and at the entrance to the Gulf of St. Lawrence is close to 0°C.

If they are healthy, then no, whales should not be cold. Year round, they sport a thick “coat” of blubber that insulates their body and allows them to maintain their body temperature at about 37°C. The layer of blubber will vary in thickness depending on the life cycle, size and age of the animal, the species and the time of year. Since they are able to stay warm this way, whales most likely do not need to shiver. In mammals, shivering can generate heat through muscle activity. For example, seals can be observed shivering on the beach or pack ice when they are out of the water.

But for whales, their fatty insulation is so effective that they need to evacuate their heat. To do so, they use parts of their body that are not insulated, such as their fins. These body parts have a counter-current heat exchange system calledrete mirabile that maintains body heat. Each of the arteries that form these networks is surrounded by several veins. The warm blood of the arteries, flowing toward the extremities, cools when it comes into contact with the cold blood moving through the veins in the opposite direction. Conversely, the cold blood of the veins, moving toward the internal organs, is warmed by the blood of the arteries. This is how heat losses and temperature differentials are  reduced.

Near Sainte-Marguerite Bay near Port-Cartier, hundreds of harp seals and seabirds have been partaking in a feast in recent days. Off the coast of Gallix, researcher Anik Boileau of the Sept-Îles Education and Research Centre has been observing spouts the past few weeks. “The whales are too far away to identify with certainty, but their spouts are too big to be those of humpbacks. Fin whales or blue whales, then.”

For those bold enough to bundle up and brave the elements, fascinating observations are possible.