A New Year of Observations Begins 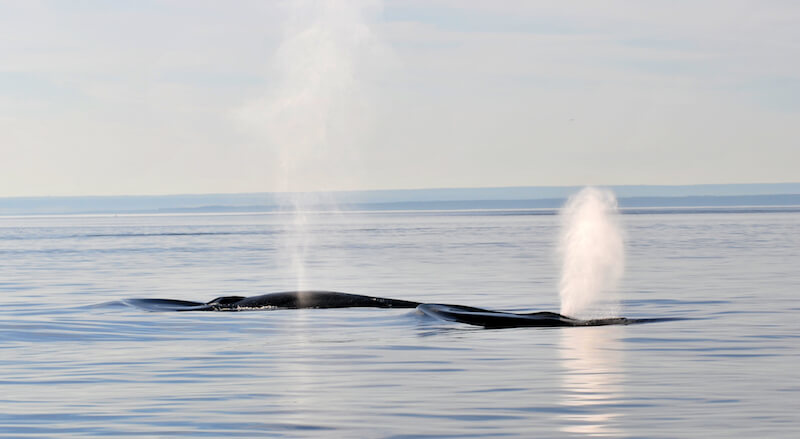 As 2018 was winding down, one observer in Bonaventure in the Gaspé Peninsula observes three tall puffs, all appearing at the same time. There are therefore three whales in Chaleur Bay. He describes the spouts as “high and straight,” adding that they reminded him of those of fin whales.

The same day, much farther upstream, near Montréal, a kayaker makes a surprising encounter: a seal! Is it exploring new territory or has it lost its way? Every year, seals are seen in the freshwater parts of the St. Lawrence, between the Great Lakes and the eastern tip of Île d’Orléans. The Quebec Marine Mammal Emergency Response Network regularly receives reports of seals outside their usual range. Whether on shore or in the water, for a seal, an encounter with humans can be a source of stress. Contacting 1-877-7baleine, maintaining a safe distance and not trying to feed it will increase its chances of survival. This way, the seal will be able to make its way back to members of its own kind.

Since early January, harbour seals have been basking on the drifting pack ice off Cap-des-Rosiers. On January 3 and 4, a group of great cormorants were photographed. “This is the first we’ve seen them this winter,” exclaims the observer. The great cormorant differs from the double-crested cormorant by the white spot on its cheeks and its larger size (approx. 93 cm compared to 83 cm).

Other seabirds are also attracting the attention of passers-by. In Sept-Îles, mergansers, a.k.a. “saw-bills”, and eiders are observed near the coast. In Tadoussac Bay, more than forty common goldeneye stand out against the blue ice. This species of diving duck migrates southward from the Arctic. And yes, for some birds, south means the icy bay of Tadoussac. “We usually see Barrow’s goldeneye here, so I was happy to see commons,” exclaims the observer. To differentiate these two species, one must compare the shape of the head and the colour of the plumage. Male Barrow’s will have a bluish or purplish head while that of male common goldeneye will show more greenish reflections. Females of both species have brownish plumage on the head, but the head of the common goldeneye is of a lighter shade.

Off the coast of Baie-Comeau, groups of seals are swimming vigorously. They are on the move. Are they looking for prey to eat, or for a shore or ice floes to rest? Could be either.

Have you seen any whales this past week? Don’t hesitate to write to us on Facebook or email us at info @ baleinesendirect.org to share your observations with us!