A Little Stroll Out to Sea

With the return of warmer weather, kayakers and boaters are setting out to go fishing, enjoy the saline air or simply feel the gentle rock of the waves beneath them. And sometimes, a whale or a seal comes to make their outing that much more memorable.

Researcher Anik Boileau, director of the Sept-Îles Research and Education Centre, put her research boat in the water on June 7. Her first outing allowed her to photograph eight fin whales and two humpback whales off the coast of Sept-Îles.

Jacques Gélineau, for his part, photographs two blue whales off Sept-Îles that have been known to the Mingan Island Cetacean Study (MICS) team for over 30 years. Does that mean these whales are old? Hard to say, since a blue whale can live to be around 80 years old, not altogether unlike a human, actually! Jacques also photographs three humpbacks, including a mother-calf pair off Port-Cartier. In humpback whales, the relationship between a mother and her offspring does not last very long. Nursing lasts about 8 months, and separation usually takes place during the summer.

Back at the docks, Jacques Gélineau observes up to six minke whales feeding near the coast within a stretch of 500 metres! “Sometimes they come to within 200 metres of the shore.” However, he regrets seeing so many water scooters zipping by at full speed, causing the animals to flee. “I even wonder if their presence might have an impact on porpoises. Three were found stranded alive this week (article in French). I find it disturbing.”

Spring always arrives a little later in Quebec’s Basse-Côte-Nord region and our most northerly observer writes to us on June 7 following his inaugural fishing trip out to sea. Off the coast of La Tabatière, he’s crossed paths with a feeding minke whale. “There have been a lot of sand lance near the coast,” he remarks. Sand lance is the prey of choice for several species, including minke whales and humpbacks.

Belugas from the ferry

On June 2, GREMM (Group for Research and Education on Marine Mammals) research assistant Mathieu Marzelière Mathieu Marzelière is waiting for the ferry that connects Rivière-du-Loup to Saint-Siméon. Near the wharf, a herd of seven belugas seems to be feeding: spitting, surface swimming, gulls diving all around, and even a cormorant carrying in its bill a small fish resembling a herring. Then, from on board the ferry, he spots a herd of 15 to 20 belugas near Île aux Lièvres. “I really hesitated between trying to fish what the belugas seemed to be hunting or attempting to photograph their markings for a little photo-ID work!” I chose the Kodak option.” You can’t take the researcher out of the man, even when he’s off duty!

Spouts from the kitchen window

In the Gaspésie town of Newport, a local resident finally spots the first fin whales of the season from her kitchen on June 5. In Cap-des-Rosiers, a local resident is radiant with joy when she notices a humpback whale under a rainbow. The next day, five minke whales are swimming outside her home, between one and three nautical miles from the coast.

On June 10, whales are observed all up and down the Gaspé Peninsula. In Cap-des-Rosiers side, the owner of a whale-watching company is thrilled to spot five large blasts. In L’Anse-aux-Griffons, spouts are being tallied by the dozen! Who’s blowing these plumes of hot air? The whales are too far offshore to identify the species.

Belugas and seals near the rocks

Whether from the rocks in Essipit, Baie Sainte-Marguerite near Sacré-Coeur, Pointe de l’Islet in Tadoussac, or even opposite Grandes Bergeronnes, numerous minke whales, belugas and harp seals have been delighting those who stop and take the time to gaze out to sea. In Havre-Saint-Pierre, minke whales have become part of the everyday scenery for our observer.

On June 7, our collaborator Renaud Pintiaux photographs Néo opposite Les Bergeronnes. The beluga is in the middle of a “logging” session. This is how we call it when whales are at rest, in reference to their stable position on the surface, which makes them look like large floating logs. In whales, the question of sleep is an intriguing one. The majority of studies on the subject have been conducted on toothed whales in captivity. In this context, researchers have determined that dolphins rest one hemisphere of their brain at a time, just so that they don’t forget to breathe! 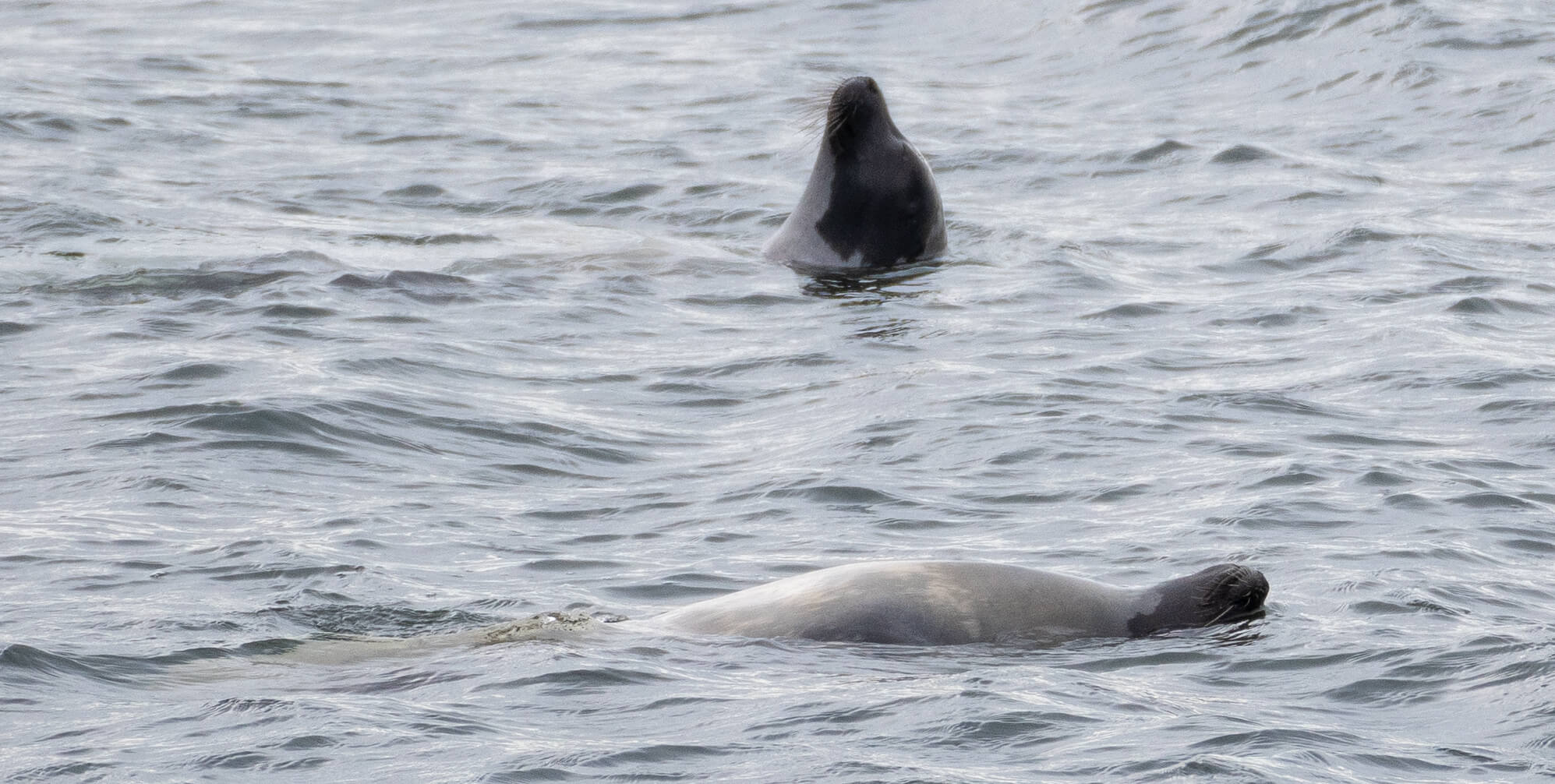