Young seal on the beach: leave it alone 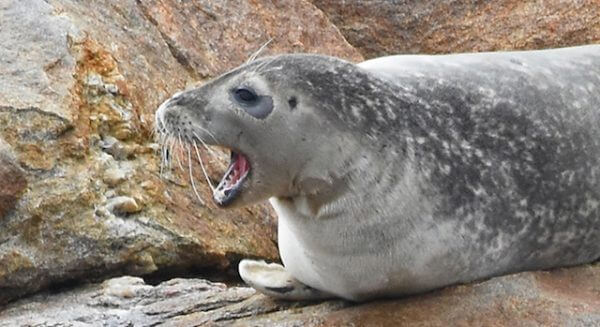 Every year, the months of May and June represent the pupping season for harbour seals. During this period, the Quebec Marine Mammal Emergency Response Network receives numerous calls to report young pups observed alone on the shores of the St. Lawrence.

For 4 to 6 weeks, the young pups will be nursed by their mothers and will put on 0.5-0.6 kg a day. After spending two weeks nursing her offspring, the mother resumes feeding for periods of up to seven hours, mainly during the day.

Young are left alone on the rocks or on the beach for hours or even days, but should not be necessarily be considered to have been abandoned. The mother may be close by, even if she is out of sight. Some observers may be misled by the behaviour of these cute little furballs, which they see “whining” or sleeping lifelessly on the beach. These signals do not necessarily mean that the seal is in distress.

Why is it best to leave seals alone? Veterinarians and specialists explain.

If a seal is constantly approached, it will not have the chance to rest or resume contact with its mother.

A certain percentage of young seals die every year, which is natural. The animal will have a greater chance of survival if it is left alone. “Repeated interactions with a seal can prevent the animal from resting, and the stress triggered by human presence can make the individual more prone to disease or predation,” explains veterinarian Stéphane Lair of the Centre québécois sur la santé des animaux sauvages and professor of Université de Montréal’s Faculty of Veterinary Medicine.

“One must avoid the mindset whereby the young have been abandoned: human presence near the young frightens the mother, a seal left to fend for itself is concerning to local residents who try to help it by moving it or prodding it toward the water, which considerably reduces the chances that the female will return”.

What should you do if you see a young seal on the beach?

When should one call Marine Mammal Emergencies at 1-877-7baleine?

Seals’ lives are split between the water and the land, where they come to rest. It is therefore completely normal to see a seal out of the water. Certain situations are problematic, however, and should be reported:

If this is the case, dial 1-877-7baleine. It will be important to answer a few questions and provide the following information:

Based on this information, the call centre teams and volunteers will head out to the site to observe the seal, ensure the animal is not being handled, as well as educate the public as to how to behave around these species. In the event the seal shows signs of distress, a veterinarian will be requested to assess the animal’s state of health and decide on the appropriate response.