24 St.Lawrence belugas have been adopted! 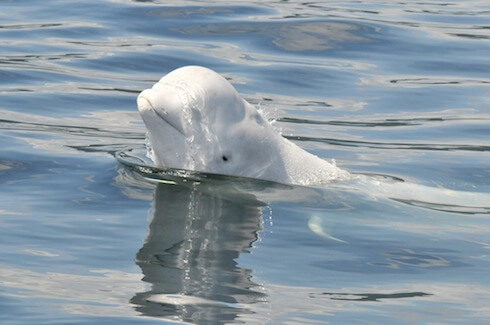 In late 2014, the Group for Research and Education on Marine Mammals (GREMM) and its colleagues from the St. Lawrence Beluga Project relaunched the Adopt a Beluga campaign in an effort to raise funds for St. Lawrence beluga research. Since then, 24 belugas have found sponsors. The latter include Québec City and Montréal mayors Régis Labeaume and Denis Coderre, respectively, Quebec Minister of Sustainable Development, Environment and the Fight against Climate Change David Heurtel, Mylène Paquette, Canadian Steamship Lines and several companies within Quebec and throughout Canada.

Creative Initiatives
Soon after the campaign kicked off, a movement of solidarity took root in the cities of Québec City, Montréal, Lévis as well as the municipalities of Tadoussac, Châteauguay, Salaberry-de-Valleyfield and Beauharnois for the adoption of a group of 10 belugas by some forty riverside municipalities along the St. Lawrence. “Because we believe in the importance of a healthy St. Lawrence, because belugas are the most eloquent reflection of the St. Lawrence, we enthusiastically support the Adopt a Beluga campaign“, declared Mayor Labeaume. Through the contest entitled Our Beluga’s Name is…, students from some one hundred elementary school classes across Quebec suggested names for these 10 belugas: Bélibec, Splash and company.

The founders of Les Bières Bélugas Ltée introduced a Golden Ale in June in an effort to adopt the beluga AL. Students also teamed up to take part in the movement. “By adopting a beluga, we’re not merely protecting a marine animal, but also helping to preserve everything around them“, explains Marie-Pier Raymond, who helped spearhead the adoption of DL0217 by students at the Cégep Édouard-Montpetit near Montréal. Other citizens chose to get on board by participating in the collective adoption of the female beluga Athéna: Connor Smith-Hott, age 6, contributed a cheque for $50 – the entire content of his piggy bank – when he visited Tadoussac, while Jonah Gapes, 10th grade student from Jonquière, raised $1,000 all by himself.

Call for an Even Larger Family
During the adoption campaign initiated in 1988, 122 belugas were able to find sponsors. Today, a new family is being formed, and GREMM President and Scientific Director Robert Michaud aspires to see it grow. “Despite the conservation measures taken and the partial protection of its habitat, the St. Lawrence beluga population is declining. We are observing unexplained mortalities in newborns. They need us now more than ever“, Mr. Michaud reminds us.

With the Belugas bulletin