Who are these minke whales? 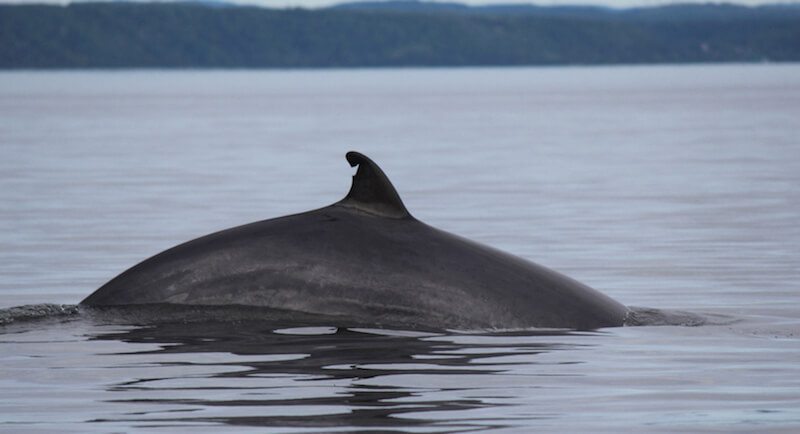 October 23, 2016: last trip out to sea. The 6th season of photo-identifying St. Lawrence minke whales is drawing to a close. After spending 165 hours at sea, making more than 200 minke whale observations and scrutinizing nearly 1,000 photos, the time has come to complete the catalogue.

But who are these minke whales? Just like humans, each individual animal is unique. Minke whales are no exception. In 2011, Mériscope initiated an inventory of the minke whales of the St. Lawrence from photos that had accumulated since 2001. Initially, 88 animals were catalogued. Every year since then, new minke whales have been photographed and indexed. In 2016 researchers were able to add 55 photos featuring 16 individuals, including 6 new ones, bringing the number to 233.

Why all this work?

Identifying minke whales is the only way of knowing whether the observations made on a given day concern a single animal that has been seen multiple times, or several different individuals. Moreover, the catalogue makes it possible to identify animals that have already been biopsied and thus avoid double sampling.

By analyzing the records of the catalogued animals, scientists can assess the proportion of animals showing signs of entanglement in fishing gear, the category and severity of injuries, as well as their locations on the body.

In the medium and long term, it will be possible to estimate the size of the population and the territory frequented by the individuals identified.

How does photo-identification work?

To identify a minke whale, one must first photograph it. The ideal photo is clear, taken perpendicular to the animal, and with one’s back to the sun. The emerged portion of the animal is fully visible.

Maintaining a rigorous logbook makes it possible to know precisely where and in what weather conditions the animal was observed. Data recorded include the date and time, visibility, sea state, wind intensity and direction, GPS coordinates, direction and distance of the animal and its behaviour.

It is estimated that no less than 70 hours was devoted to identifying minke whales in the laboratory in 2016.

First, the logbook is transcribed into an Excel file to make the data easier to process. Then, work with the photos begins. The first step is to select the best shots of each of the individuals photographed. They are then assigned a temporary ID based on the order of observation (Ba1 being the first Balenoptera acutorostrata photographed, Ba2 the second, etc.).

Subsequently, each shot is carefully and methodically examined to determine whether the dorsal fin features a scar, gash or notch, no matter how small it might be. Markings on the flanks and peduncle are also considered.

It is then necessary to eliminate young animals without any distinctive markings. Indeed, in immature individuals, the dorsal fin has not finished developing. Its shape will continue to change for a few years, making identification impossible, unless it shows a distinctive mark. In this case, the photo will be kept for identification. On the other hand, an adult without any markings may sometimes be recognized merely by the shape of its dorsal fin.

Selected images are entered into DARWIN (Digital Analysis and Recognition of Whale Images on a Network), a software program developed at Eckerd College in St. Petersburg, Florida. It uses an automated process to draw the contour of the dorsal fin. This outline is recorded in the database to be used when searching for similar-looking dorsals. The system then uses a number of algorithms to compensate for the fact that the photos are taken at different distances and angles and then performs the matching process. The software then proposes a list of individuals already listed in the database as potential matches, sorted by probability.

It is then up to the researcher to make the final judgement. Nothing like the human eye! Taking into account more subtle indicators than the gashes and notches already detected by DARWIN, the researcher observes the proportions of the dorsal fin, the curve of the trailing edge, the presence of markings on the flank or peduncle, and the colouring and imperfections of the skin to then confirm or infirm the match.

If the animal is not in the database, its photo and its dorsal contour are added and it is assigned a name, consisting of the letters “Ba” followed by a number. For example, Ba207 is the 207th Balenoptera acutorostrata to be added to the database. Its record is completed with information obtained from the logbook (date of observation, GPS data) and from photo analysis (locations of markings on the body and descriptions thereof, if necessary).

In the case of an individual already existing in the database, the photo and outline of its dorsal fin are also added under the name of the matched individual, thereby providing a portrait of the dates and sectors where the animal was photographed.

DARWIN can be used to comb through the records, sorting them by individual, by date, by sector of observation or by type of injury and location of markings.

It’s always nice to find an animal faithful to the area. Sometimes we have the surprise of seeing one that has not been photographed for several years. Some have not changed, while others bear new markings.

But the season is short and the vagaries of the weather are a limiting factor. 165 hours in a year is very little! And a small boat in the immensity of the Estuary covers but a minuscule percentage of the area frequented by minke whales. How many of them go unnoticed?