White Spouts in a White Landscape 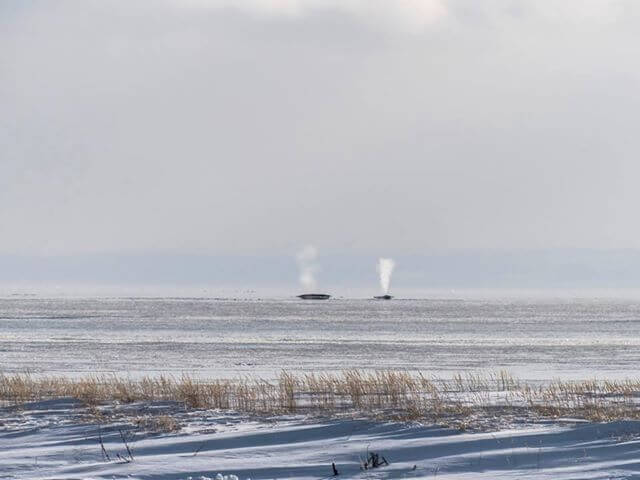 Our collaborator René Roy was in Mazaltan, Mexico, where he photographed humpback whales. © René Roy

On the afternoon of January 8, an observer is driving down the “Whale Route” toward Sept-Îles. Upon her arrival at Godbout, at the confluence of the river of the same name, she parks her vehicle to snap a few photos. A local resident informs her about two large spouts clearly visible offshore, which she manages to photograph. With the difference in temperature between that of the exhalation and the air, the spouts appear higher and more opaque, like a long chimney plume. According to the man, the two whales have been swimming in the area for a few days already and occasionally approach the mouth of the river.

Back at her house, the observer sends us a photo. From the picture, it looks like a blue whale, given the bulge near the spout that suggests a large blowhole. However, the distance at which the image was taken complicates the ID. The whales could therefore be humpback whales, fin whales or blue whales.

In Les Escoumins, a debate fires up on the social networks: is it a humpback or a blue whale that was observed? The photos being sent around are not enough to make an unequivocal identification. However, tall spouts are spotted several times during the course of the day. How long will this large rorqual (or these large rorquals) remain in the area and will it come close enough to the coast to be identified? It’s impossible to know.

On the other end of the continent, our collaborator René Roy managed to photograph a few humpback whales. While travelling along the Pacific coast of Mexico, René Roy sent us a field log to share his encounter with humpbacks during their breeding season in the warmer southern waters.

Have you seen any whales this past week? Don’t hesitate to write to us on Facebook or by email to share your observation with us!