Where There Is Prey, There Are Whales! 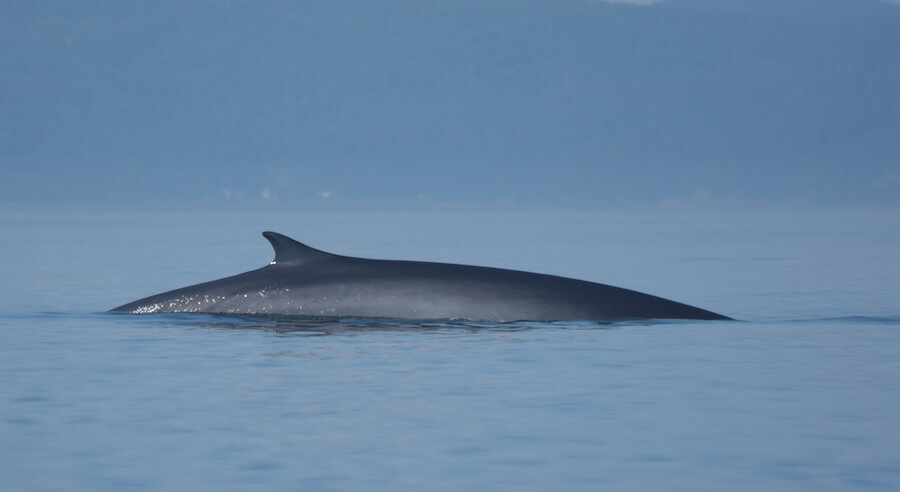 Harbour purpoises can be seen alone, in pairs or in groups © GREMM

“Unbelievable! It’s hot even out on the water,” exclaims a GREMM volunteer research assistant participating in the photo-ID program for large rorquals in the St. Lawrence Estuary. On July 4, under a brightly shining sun and despite the ensuing glare on the water, on her trip out of Tadoussac this volunteer identified fin whales Bp955 (“Ti-Croche”) and Bp918, not to mention her observation of twenty or so belugas and several minke whales.

Still farther east, Anick Boileau, Director of the Sept-Îles Education and Research Centre (CERSI), began her research season off Sept-Îles, and was able to observe in her first week on the water 10 fin whales, 5 humpback whales (including a female with calf), 26 minke whales, hundreds of porpoises and a basking shark!

A few kilometres down river, in Longue-Pointe-de-Mingan, one finds the Mingan Island Cetacean Study (MICS). Minke whales are seen daily from the MICS museum. At sea, the two research boats tally six or seven humpbacks and one fin whale on June 28. On July 1, observations are more scarce: four fin whales and one humpback. Where did the dozens of individuals seen last week go? It’s possible their prey might have moved to another sector, and with them, the whales.

Same story on the other side of the river. Between L’Anse-à-Beaufils and Percé, our observer/naturalist crosses paths during her July 3 whale-watching trips one fin whale and one humpback. While humpback whales were omnipresent last week, activity in the area has since tapered off. Nevertheless, there are always the ever present and dynamic minke whales.

On July 1, off the coast of Gaspé, a humpback began to approach the boat of our collaborator René Roy, who carries out photo-ID work for MICS. The animal lingered around the boat (whose engine had been turned off) for quite a while. René Roy was able to identify the individual as a humpback he had photographed back in 2011, but not yet registered in the catalogue. On July 2, he photographs 10 humpbacks, including Tic Tac Toe, Irisept and Boom Boom River (known as Gaspar in the Estuary). The following day, however, with his boat carrying him over the Banc des Américains, he fails to spot any blows.

Against the backdrop of the Petite-Vallée music festival, one festivalgoer is witness to a different type of spectacle: dozens of stealthy harbour porpoises. Before returning to attend a concert, he also spotted a large spout erupt above the water surface.

Lastly, our observer from Baie-des-Sables in the Lower St. Lawrence region finally spots two minke whales, his first of the season. “I was beginning to lose hope, believing the area was no longer appealing to whales,” he sighs. There are also rumours of a beluga in the area, an observation that would be rather rare, but not impossible. Every year, belugas visit areas outside their summer range. If you happen see one, don’t hesitate to report it to the Quebec Marine Mammal Emergency Response Network.