When Birds Take Advantage of Whales to Feed 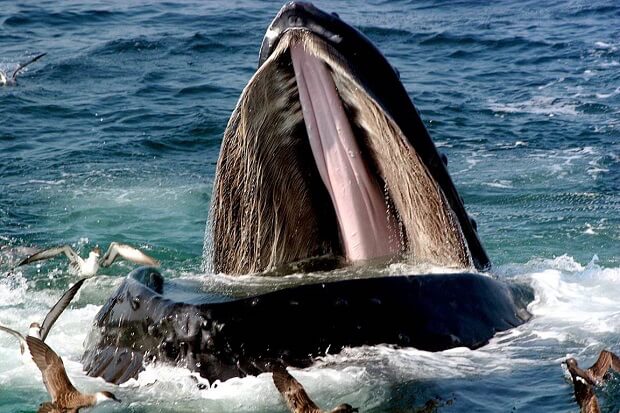 An impressive scar forms zebra-like stripes on the right flank of one of the three fin whales seen off Tadoussac this week. The female Zipper is here. When she was first encountered back in 1994, she still had open wounds and her skin was in tatters. This “vestige” is that of a collision with a boat. The other two animals are not identified. Not far from them are dozens of harp seals and gray seals. In addition, thousands of long-tailed ducks line the waters of the St. Lawrence in this sector, where they’ll spend the next few months.

Very often, seabirds and marine mammals forage in the same patches of water. The birds take advantage of whales’ feeding behaviours to catch a few prey of their own. At the mouth of the Saguenay, various species of gulls (great black-backed, herring, glaucous, Iceland, Bonaparte’s) and black-legged kittiwakes were seen snagging fish right before the eyes of minke whales and gray seals.

This relationship between predators of the seas and the air is observed everywhere on the planet. Common dolphins, by corralling fish into huge “bait balls”, make it easier for diving birds such as northern gannets to catch their underwater prey. Humpback whales in the Gulf of Maine use bubble nets to capture schools of fish or krill. Gulls take this opportunity to pick up dead fish left on the water surface following a devastating run of whales. In the Bering Sea, gray whales, by filtering sediments with their short baleen, cause small crustaceans called amphipods to rise to the surface, much to the delight of birds such as fulmars or phalaropes. Black-browed albatrosses follow killer whales over long distances on the high seas to eventually grab a few dinner scraps. This association is believed to help reduce their energy expenditure compared to locating and pursuing live prey. The gray-headed albatross is even reputed to capture chunks of squid regurgitated by sperm whales on the water surface. Bottlenose dolphins in the salt marshes of the southeastern US have developed a rather risky manoeuvre, i.e. temporarily stranding themselves to capture fish that have been pushed ashore by the wave they create. Wading birds such as great egrets are then also attracted to these places to feed.

In Franquelin and Baie-Comeau in the Haute-Côte-Nord region and Baie-des-Sables in the Gaspé, in addition to the few minke whales observed, it is the common eiders in particular that have been grabbing the attention of observers. These large sea ducks live in arctic and subarctic coastal marine areas. In the fall, the populations of the St. Lawrence generally follow the shoreline of the Maritimes to winter off the coasts of Nova Scotia and New England. Groups of eiders from Labrador and Ungava Bay spend the colder months along the north shore of the Gulf of St. Lawrence, particularly in the Mingan Archipelago area. Groups of common eiders are also present around Anticosti Island.