Whales and Seals Amid the Ice Floes 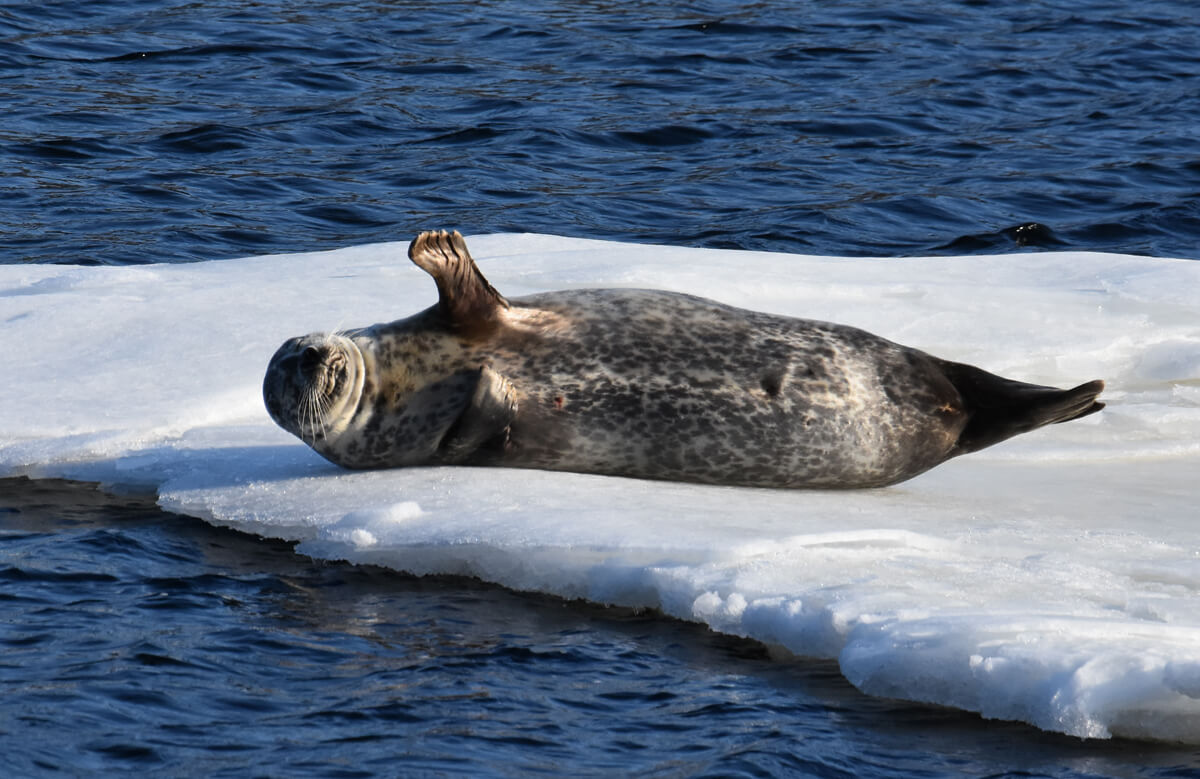 “They’re breaching!” exclaims an innkeeper from Forillon, in the Gaspé Peninsula. It’s December 3 and the week is off to a good start for him: through his window, he observes three humpbacks in Gaspé Bay. They thrust their bodies into the air and come down with a huge splash. In whale jargon, these jumps are called “breaches” and are believed to be used to hunt, communicate, play or gather before undertaking the long southward migration. Over the next few weeks, these humpbacks will travel 5,500 km to the Caribbean, where they will spend the winter.

Also in Les Escoumins, opposite Anse aux Basques and Quai des Pilotes, a sizable humpback is observed. “Its colour pattern is similar to that of Siam,” remarks the observer. For about thirty minutes, the humpback whale blows and dives before leaving our observer’s field of view as it makes its way toward Les Bergeronnes.

One seal is resting on a floating block of ice. It is surprising to see it here, off the coast of the village of Petite-Rivière-Saint-François in the Charlevoix region. But seals sometimes explore areas far beyond their usual range. Single bearded seals have been observed in the Saint-Maurice River near Trois-Rivières. In Pointe-aux-Trembles, two kayakers were astonished to see a seal showing its belly. What are these solitary seals doing? Are they lost or are they exploring new territories? Hard to say. In any case, it is fascinating to observe them.

“There’s lots of action,” exclaims one observer from the Sept-Îles region. Two minke whales are feeding not far from the mouth of the Brochu River. But it is mostly the hundreds of hunting harp seals that give the impression that the water is boiling. Every year in late September, harp seals embark on their migration. The Northwest Atlantic population then leaves the west coast of Greenland and the Canadian Arctic to migrate to the species’ breeding grounds off Newfoundland and the Gulf of St. Lawrence, sometimes even reaching as far as the Estuary. In the Bay of Sept-Îles, at the mouth of the Rapides River, two grey seals and two harbour seals are hunting.

In downtown Gaspé, passers-by take a break while crossing the bridge. About 50 harbour seals are basking on the newly formed pack ice. Harbour seals can be found in the St. Lawrence year round.