Whale Season Draws to a Close 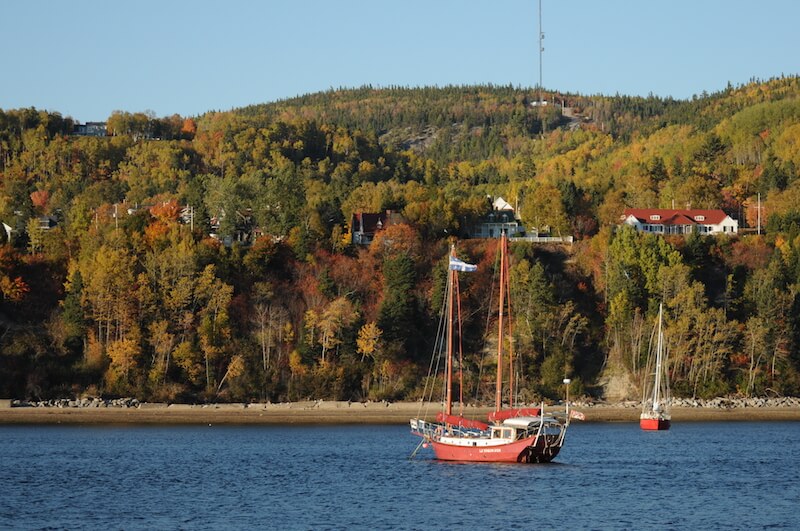 Parks Canada’s land-based observation sites adjacent to the Saguenay-St. Lawrence Marine Park are closing down for the season; meanwhile, the naturalists who work there are returning to their winter occupations. Whale-watching cruises are making their final runs in Gaspé, with crew members beginning to turn to boat maintenance work. The GREMM and MICS research teams are wrapping up their field work, and will soon embark on data analysis and report writing. What do they all have to report in this final week with the whales?

Minke whales have been absent near the lookouts at the Marine Environment Discovery Centre in Les Escoumins and Cap de Bon-Désir in Les Bergeronnes. The minke whales that feed near the cliffs are the ones in the spotlight. Offshore, in the heart of the Marine Park, the fin whale Caïman and her calf are spotted once again and five fin whales are feeding near the surface. At Longue-Rive, the female blue whale Chameau is identified. The two individuals observed at her side remain anonymous.

Humpback whales are still very much present in the Gaspé region, scattered between Cap des Rosiers and Cap Gaspé. On October 6, cruise operators encountered 11 humpbacks, including the well known Hunter and Le Souffleur in the Estuary. Amongst them, two individuals execute simultaneous breeches!

Tons of whales (literally!) are found west of Longue-Pointe-de-Mingan. On October 4, the MICS team tallies 80 whales including 10 blues, 4 right whales, 30 fin whales and 30 humpbacks! It is quite understandable that they are having a hard time leaving the research station! In Tadoussac, the GREMM team aboard the Bleuvet is in its last days on the water. Although belugas will remain in the area for several weeks yet, work on the water is hampered by marine conditions. On October 11, they witnessed a hunting scene in which several belugas were spitting on the water surface. Might this tactic be used to scare or stun the prey?

Anik Boileau, director of the Sept-Îles Education and Research Centre (CERSI) continues to brave the cold in her efforts to observe whales between Gallix and Port-Cartier. Her list of sightings includes: 5 humpbacks, 3 blue whales and 10 fin whales. Jacques Gélineau, a collaborator for the Nordic Institute for Environmental and Occupational Health Research (INREST) in Sept-Îles, claims that this sector is “the meeting place for whales this fall.” Far from stopping his trips offshore, he will continue to venture out onto the water for another month. Amongst other sightings, he recognizes this week the humpback Triad (H163) and blue whales B306, B120 and B478. He also crosses paths with a number of fin whales, including three pairs. It seems that these giants are feasting on krill, which would explain the presence of red feces in the area.

No matter what the season, our collaborator in Franquelin constantly keeps an eye out for passing whales. Surprises await her, like this solitary beluga seen on October 5 just a hundred or so metres from shore. This is not the first time that belugas have been seen here. On July 29, 2017, a herd of roughly twenty individuals had been spotted off Pointe Paradis. In summer, these whales congregate in the Estuary between Île aux Coudres, Forestville and Île du Bic, as well as in the Saguenay Fjord, but in winter they move to the downstream part of the Estuary (between Forestville and Pointe-des-Monts) and the northern portion of the Gulf.