Were whales affected by those squalls that pummelled the North Shore? 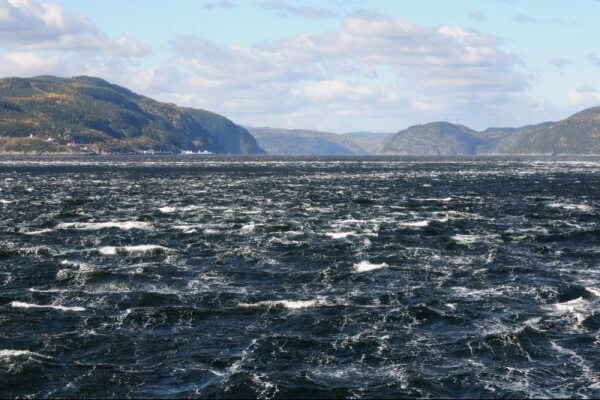 It is not uncommon to see whales breach when the sea is heavy. Might this be a means of preventing water from entering their respiratory tracts? That's one theory. © GREMM

On November 17, gusts of up to 90 km/h whipped across the shores of the Côte-Nord region. The raging, whitecap-speckled St. Lawrence seems like a dangerous, inhospitable environment. Even if whale spouts dissipate immediately, and with them all traces of the animals’ presence, the latter seem to continue their usual activities despite the churning waters, like the minke whales observed repeatedly in Franquelin.

The whales acclimate very well to the marine environment and its fitfulness. They only need about a second to fill their lungs with oxygen. The blowhole muscles are powerful and connected to fibrous plugs that block off the nostrils when the muscles are relaxed and prevent water from entering the blowhole. Whales voluntarily contract these muscles to open the blowhole and exhale when they arrive at the surface. It is therefore assumed that they are capable of determining the right time and the right place to come up to breathe despite the turbulence of the water. And, when the waves are strong, they seem to emerge more out of the water, which probably allows them to rise above the chop to breathe.

Whales do occasionally suffer from the effects of storms. Water can rush into an open blowhole and cause the whales to choke. Powerful waves could disorient them and lead to navigational errors. In winter, high winds can cause ice to accumulate in certain places, which for whales can turn into a deadly trap. Lastly, when the whales’ food sources are blown by strong winds, the animals’ geographical distribution changes accordingly in the days that follow.

The calm after the storm

The storm was followed by a lull. In the days that followed, several land-based observers resumed their scouting from shore. On November 18, a Sept-Îles-based collaborator spotted three large spouts 4 nautical miles southeast of Pointe Jambon (Port-Cartier) and the fleeting passage of a few harbour porpoises in Baie Sainte-Marguerite.

The same day, at Pointe aux Alouettes in Baie-Sainte-Catherine, two birders admiring a pair of snowy owls discover a group of belugas. White feathers and white backs make for a dreamy image! Herds of belugas and solitary minke whales have also been seen daily from the Tadoussac dunes, as have large gatherings of harp seals.