Toward a better co-existence of shipping traffic and belugas in the St. Lawrence 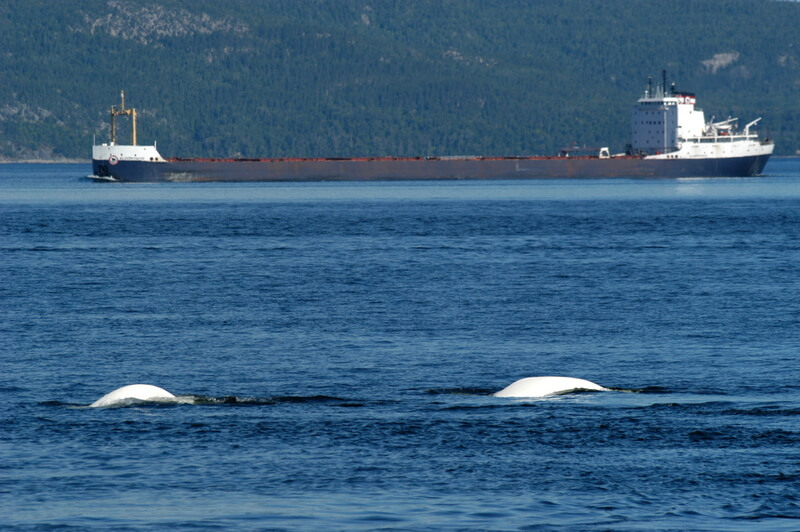 To facilitate the recovery of whales at risk in the St. Lawrence, researchers, wildlife managers and industry are working together to develop measures to reduce the various threats faced by whales. But how can we be sure that implementing one protection measure will not have an adverse effect on another species at risk or magnify another threat? Using a simulation model, researchers found that the voluntary measures introduced in the St. Lawrence Estuary in 2013(article available in French only) to reduce the risk of collisions between merchant ships and whales may also reduce the exposure of female and young belugas to noise.

The St. Lawrence is not only a giant feeding ground for whales, it is also an important seaway linking the Atlantic Ocean to the Great Lakes. Every year, more than 7,000 merchant vessels pass through the St. Lawrence Estuary, along with hundreds of other boats (whale-watching boats, ferries and recreational watercraft). With this cohabitation between whales and ships comes the risk of collision and noise disturbance.

If the negative repercussions of ship strikes are evident, the effects of underwater noise on whales are more difficult to pinpoint and may include, for instance, changes in behaviour (vocal or otherwise), avoidance of certain areas, loss of feeding opportunities or reduced hunting efficiency, masking of communication and loss of hearing.

In 2011, various actors in the maritime industry and research and conservation sectors formed the Working Group on Marine Traffic and Protection of Marine Mammals in the Gulf of St. Lawrence (G2T3M) to propose solutions for mitigating the shipping-related risks to which marine mammals are exposed. This collaboration led to the adoption in 2013 of voluntary measures by shipping operators. Such measures include a reduced speed zone, an off-limits zone and a recommendation to navigate the northern channel of the Estuary to avoid areas that are highly frequented by female and young belugas along the southern shore.

What are the consequences of these voluntary measures on noise pollution in the critical habitat of the St. Lawrence beluga, a population not greatly affected by collisions, but dependent on sound for socializing, maintaining mother-to-calf contact and locating prey?

To evaluate how these mitigation measures modify the beluga’s acoustic environment, researchers used a model to simulate movements of merchant vessels and belugas and their interactions in the St. Lawrence Estuary and the Saguenay Fjord (Marine Mammal and Maritime Traffic Simulator, or 3MTSim). They added to this model the acoustic signatures of different vessels and data on sound propagation in the environment. They ran a number of simulations with and without the voluntary measures to compare the cumulative boat traffic noise to which belugas are exposed.

The results of this study, published recently in the scientific journal Ecological Modelling, reveal that the measures implemented to reduce the risk of ship strikes may reduce the noise exposure of belugas in certain areas of the Estuary, particularly in the Upper Estuary (upstream of Île Rouge), which is mainly frequented by females and young. This is good news, as protecting females and young is a priority for the recovery of this endangered population. However, in the reduced speed zone, belugas are exposed to more noise than before. How can that be? Because a slower-moving vessel, although it emits a lower instantaneous sound, produces noise over a longer period of time (since it takes more time to travel a given distance). The reduced speed of merchant ships may therefore lower the risk of collision, but increase the aggregate acoustic energy emitted into the environment.

In order to implement optimal mitigation measures to reduce both the risk of ship strikes and noise disturbance, researchers will need to learn more about the acoustic thresholds above which adverse effects are observed. This threshold probably varies depending on the species, the age of the individual and the frequency of the sounds emitted.

According to Robert Michaud, GREMM Scientific Director and one of the co-authors of the report, this study demonstrates the usefulness of simulation models in testing the effects of different protection measures in the St. Lawrence. Such models should also be used to assess various development projects in the St. Lawrence River and their impact on the risks of collision and disturbance to whales in order to ensure sustainable development and cohabitation.