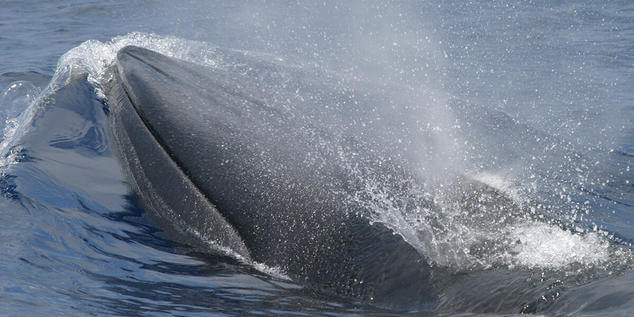 Gulf of Mexico Bryde's whale could disappear if human activities continue to increase in their natural habitat. © NOAA #779-16332-1

Researchers are sounding the alarm to prevent the imminent disappearance of the Gulf of Mexico Bryde’s whale. “This mammal is at risk of being the first baleen whale to go extinct since the Atlantic grey whale (Eschrichtius robustus) three centuries ago,” they mention in an article published on February 7 in the scientific journal Nature. “Rapid action is needed to eliminate sources of human-induced death and injury among these whales,” they argue.

Few people have ever heard of the Gulf of Mexico Bryde’s whale, a subspecies of Bryde’s whale. Since 2017, it has been classified as a “Critically Endangered” subspecies on the International Union for Conservation of Nature’s (IUCN) Red List of Threatened Species. However, this new status has attracted very little attention from the public, from managers or from the political arena.

The subspecies lives year-round in the northeastern portion of the Gulf of Mexico, mainly in the De Soto Canyon area. “It has taken refuge in the quietest part of the Gulf, where oil and gas activities are banned by a moratorium dating back to 2006,” explains Francine Kershaw, project scientist at the Natural Resources Defense Council (NRDC). “A moratorium that may be lifted in 2022,” she points out in an interview with Whale Online.

Peter Corkeron, researcher at the National Oceanic and Atmospheric Administration (NOAA) and co-author of the Nature article, stated in an interview with Whales Online that “The main threat to the survival of this whale is not one particular thing, but all the human activities in the region, which entail risks of ship strikes and entanglement, as well as noise and hydrocarbon pollution.”

According to Kershaw, development of the oil and gas industry (announced in the new five-year offshore oil and gas licensing program proposed last January and including twelve licences in the Gulf of Mexico, two of which are in the eastern parts), as well as two recent bills (SECURE American Energy Act and SEA Act) that would water down the US Marine Mammal Protection Act, are among the most important threats to the survival of this whale and other cetaceans in US waters. The potential lifting of the moratorium on oil exploration and development in the eastern gulf would only exacerbate already existing threats.

It is not too late to save this whale, believes Corkeron, but its numbers underscore the urgency to act.

It is not too late to save this whale, believes Corkeron, but its numbers underscore the urgency to act. In 2009, it is estimated that this subspecies numbered a mere 33 individuals. The following year, the Deepwater Horizon oil spill is believed to have affected 48% of the population and caused reproductive failure in 22% of females. How many individuals remain today? Researchers are not yet sure, but a new estimate is expected to be published within the next year.

What can be done to prevent the Gulf of Mexico Bryde’s whale from disappearing? “We need to protect the Marine Mammal Protection Act, maintain the moratorium and make the transition to cleaner, less risky energy,” sums up Francine Kershaw. A discourse that resembles the one currently being maintained in Québec by environmental organizations and citizen groups in response to the recent Hydrocarbons Act and its draft regulations, in an effort to protect species at risk in the St. Lawrence and surrounding areas.