Tips for Surviving the Cold in Quebec 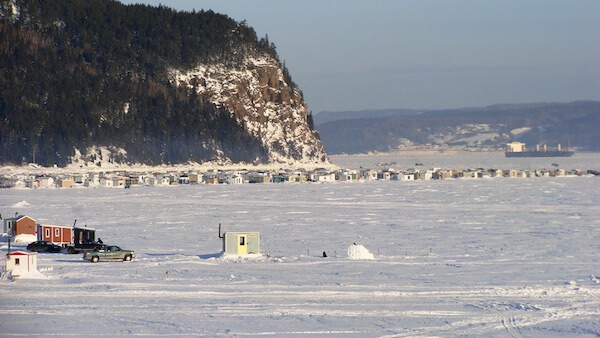 January 18: hundreds of Barrow’s goldeneye take wing amidst the ice floes off Cap de Bon-Desir. They’re not alone. The ice, which forms off the frigid shorelines, is widely frequented by harp seals; meanwhile some 50 belugas are weaving their way through these cold waters. In Tadoussac Bay, about a hundred or so greater scaup have set up camp. Groups of harp seals have been seen off of Sacré-Cœur in the Saguenay, and off of Franquelin (Haute-Côte-Nord region) and Trois-Pistoles (Bas-Saint-Laurent region). Belugas, seals and birds: how do they manage to stay warm?

Marine mammals have a thick coat of fat, which is covered with thick fur in the case of seals. For example, in belugas, the blubber layer ranges in thickness from 2.5 to 9.5 cm. In parts of the body not protected by this coat, such as the fins of cetaceans and the flippers of seals, there is a heat exchange system: heat from the blood in the arteries, which is channelled toward the extremities, is recovered by the blood in the veins to return to the internal parts.  This system is used to regulate body temperature. Birds, in addition to their insulating plumage which protects them from the cold, also have a heat exchange system to minimize heat loss in their legs. Some species also have an anti-freeze protein in the skin of their legs that prevents them from freezing when swimming and walking on snow and ice.

Less spoiled by nature, humans bundle up warmly to enjoy the winter and associated activities such as ice fishing. A custom inherited from the First Nations, this type of fishing is practised in a number of municipalities along the Saguenay Fjord: L’Anse-Saint-Jean, Sainte-Rose-du-Nord, Saint-Fulgence, La Baie. The multicoloured shelters used by fishermen to protect themselves from the cold will soon be a common sight in the region. The ice has to be thick enough to be able to walk on, set up a shelter and drill a hole. For the time being, strong winds and the return of mild temperatures have delayed the installation of these “villages” on the Saguenay, even if the season has been open since January 14. What species are sought by fishers? Bottom-dwelling species such as cod, hake, redfish and Greenland halibut, as well as smelt and sea trout.

Under the responsibility of Fisheries and Oceans Canada and in collaboration with fishermen, monitoring is being performed by teams from Parks Canada, Parcs Québec and Promotion Saguenay of the harvesting of marine resources in waters up to 150 m deep. The Ministry of Forests, Wildlife and Parks is also monitoring smelt fishing on the Saguenay.