Tips and Tricks for Recognizing Species 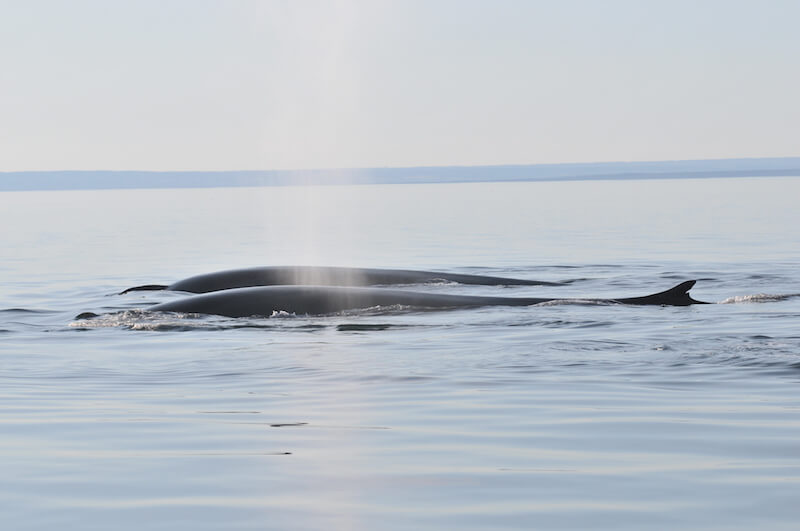 “On December 3, I spotted two whales off Sainte-Thérèse-de-Gaspé,” writes in one observer, delighted to be seeing whales in December. What species could it be? Not such a simple question to answer. For starters, whales only reveal a tiny part of their body when they surface. If the observation takes place from shore, as do most winter sightings, the challenge is even greater. Fortunately, there are clues. These tips are not infallible, however. Weather conditions must be favourable and the animals’ behaviour also plays a role in species identification.

Oftentimes, the first thing one notices is the spout. Is it a straight column, at least 4 m high? Then it’s probably a fin whale or a blue whale. An oval-shaped spout, as wide as it is high? Possibly a humpback. As for minke whales, their spouts are generally barely visible or not visible at all. Moreover, in this species, the blowholes from which the spout emerges appear at the same time as the curved dorsal fin. This distinction is precisely what tipped off a Franquelin resident and helped her identify the minke whales opposite her home.

On December 1, a collaborator posted on the boulders of Cap de Bon-Désir in Les Bergeronnes spots four minke whales as well as three fin whales. Unlike minke whales, in fin whales the blowholes appear first, followed by the dorsal fin. The back of the fin whale is dark or even black. The colouration of the blue whale is a much paler grayish blue and is speckled, and the dorsal fin is tiny. Two of these bluish behemoths were recognized at Pointe au Jambon near Sept-Îles on December 2. Three other large rorquals were also seen there, but their species could not be determined. The same is true for two other giants spotted northeast of Île du Corossol.

Occasionally, a tail pops up. Approximately 15 to 18% of St. Lawrence blue whales raise their tails when they dive. Humpback whales also exhibit this behaviour. This species presents a black-and-white pattern that varies from one individual to the next. A Gaspé-based collaborator recognized three humpbacks off Grande-Grave on December 2 thanks to their tails. “One of the three individuals seemed to be smaller,” he says. Another witness corroborates this statement with his photos. The latter are closely examined by one of our collaborators, René Roy, who for several years has been carrying out photo-ID expeditions for the Mingan Island Cetacean Study (MICS). René finds that the dorsal fin of the adult in the pair is very similar to that of Irisept, a female seen this summer in the Gulf with her newborn. However, it’s hard to say for sure, as the photo lacks detail and resolution. Another photo of a humpback sighted off Les Bergeronnes on December 4 reminds René this time of the “face” of High Heels, a female observed this fall in the Estuary. Is it really her? The uncertainty remains.

A herd of belugas is seen off Les Bergeronnes on December 1. When winds are strong, they are sometimes confused with the whitecaps formed by the waves. Quiet days also provide better conditions to spot and sometimes hear the breath of harbour porpoises. One collaborator crosses paths with four porpoises in the Bay of Sept-Îles. In this same bay as well as off Rimouski, several harp seals are present, which are recognizable by their black hooded head.

To learn more: How to Recognize Them