The Porpoise that Thought It Was a Beluga 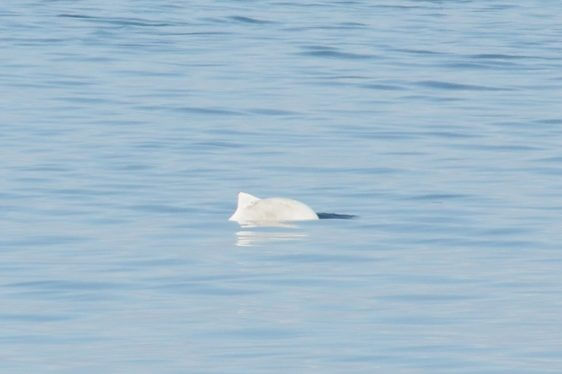 On October 13, in the heart of the Marine Park, a harbour porpoise surprises observers with its whitish colour recalling that of a beluga. A white porpoise was also photographed in the Estuary back in 2010. What might explain this paleness?

The degree of colouration of skin, hair, feathers, mucous membranes and even the iris of the eye is dictated by genes that are involved in pigment production. Albinism is a genetic anomaly that results in an absence of pigmentation. Specifically, it is the enzyme tyrosinase, which plays a major role in melanin synthesis, which is missing or defective. An albino will thus have red eyes, as the blood vessels will no longer be masked by the colour of the iris.

Cases of albinism have been reported in 21 species of cetaceans, mainly sperm whales and bottlenose dolphins. These “immaculate” whales are more likely to lose heat quickly in colder waters, are more sensitive to sun exposure and more visible to the sharp eyes of predators.

The white porpoise encountered in the Marine Park may be an albino, or it may have another condition such as leucism, where partial or complete discolouration of the skin is due to a lack of pigments in certain parts of the body. The irises, however, are coloured and the retina is normal. Cases of leucism have notably been observed in southern right whales as well as in sperm whales, various species of rorquals and dolphins. Another possibility is that some whales appear white due to wounds and scars or if they are covered with fungi, which could be a sign of lobomycosis (Lobo’s disease).

Although beluga whales are white, they are not albinos. They are generally brown at birth and turn gray. When they reach adulthood (around the age of 12) they lose their pigments, turning white with the exception of a dark hue on the skin of the tips of the fins and dorsal crest.

On October 12, the GREMM team crossed paths with a herd of belugas near Batture à Théophile off the coast of Les Bergeronnes. All of a sudden the narwhal is surfacing amongst them! This is the same young male seen this summer at the mouth of the Saguenay. Visually, he stands out from his “cousins” – belugas and narwhals both belong to the family Monodontidae – with his dark speckled “coat” and long tusk. Indeed, the two species look like they’re related: comparable size, a back with no dorsal fin and a rounded head topped by a melon. Narwhals are gray at birth. They then grow darker in their first few months of life until they are nearly black, after which they become speckled and grow paler on their bellies and sides. Also in Les Bergeronnes, near Cap Granite, the fin whale Zipper – with the imposing scar on her right flank from a run-in with a propeller – did not go unnoticed by cruise operators in the Marine Park on October 16. On October 18, they encountered 1 humpback, 1 blue whale and 10 fin whales in the Estuary.

On October 13 in Sept-Îles, a “mountain” covered with grayish-blue spots appears before Anik Boileau, researcher and director of CERSI. A blue whale’s pigmentation is in a way its fingerprint. Anik also identifies 12 fin whales and a single humpback. In humpbacks, it is mainly the undertail colouration pattern that is used to tell individuals apart. After a thorough evaluation, the colours and pattern under the caudal fin of the animal seen off the Tadoussac dunes on October 13 were not enough for the MICS team to identify the individual in their catalogue of St. Lawrence humpbacks. If the photos of its tail meet established photo-ID criteria, a new code will eventually be assigned. Three humpbacks were also present off Bonaventure Island on October 9.