The First Right Whale Necropsy of 2019 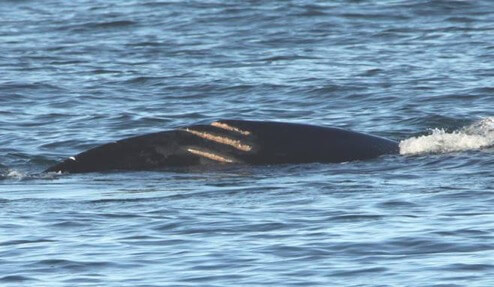 The North Atlantic right whale identified as Wolverine is currently analyzed on Miscou Island, New Brunswick. The necropsy requires the contribution of nearly twenty people as well as heavy machinery. A right whale can measure up to 17 metres long and weigh up to 70 tonnes. Handling such a carcass is no easy task!

The animal was spotted on June 4 during an aerial survey conducted by the National Oceanic and Atmospheric Administration (NOAA), midway between the Gaspé Peninsula and Miscou Island, i.e. 50 nautical miles from each. It was in a fishing area that had been closed off since May 17 in a precautionary measure to prevent entanglements. On June 5, the CCGS A. LeBlanc, a Canadian Coast Guard ship, began towing the carcass to New Brunswick. After nearly 13 hours, ship and whale are near the coast in anticipation of the necropsy, which is being performed on June 7.

A necropsy is the equivalent of an autopsy in humans, and consists of a comprehensive analysis of the animal. Thanks to necropsies, expert veterinarians were able to conclude that of the twelve right whales found dead in 2017, two mortalities were related to entanglement in fishing gear, four were attributable to collisions with ships and the cause of one death remained undetermined. For the time being, neither the cause or exact timing of Wolverine’s death have been able to be determined based on observations of the carcass.

Specialized teams of veterinarians, biologists and marine mammal experts from Fisheries and Oceans Canada, the Marine Animal Response Society, the Atlantic Veterinary College of the University of Prince Edward Island and Université de Montréal will collaborate in the necropsy. It may be several months before the results of the analyses become available.

The New England Aquarium team has identified the right whale. It is Wolverine, a male born in 2010 to female 3123. He owed his name to three large scars at the base of his tail, the result of a collision with an engine propeller when he was 5 years old. During the first five years of his life, Wolverine was seen entangled three times, with two of these entanglements considered minor and one moderate, according to the standards developed by the New England Aquarium. This individual was seen in 2017 and 2018 in the Gulf of St. Lawrence. At the current time, we do not know the cause of the mortality.

Part of the North Atlantic right whale population has traditionally spent summers in the Bay of Fundy. Since 2017, the Bay of Fundy appears to be less heavily visited and a major increase in right whale sightings has been noted in the Gulf of St. Lawrence. In 2017, twelve right whale carcasses were found in the Gulf. Mitigation measures to lower the risks of entanglement and collisions were urgently implemented that summer. Measures were also applied in 2018; no carcasses were found that year. This year, speed reduction zones and mitigation measures have once again been put into place.

Interactive maps of the right whale sightings in Canadian waters: WhaleMap and On Alert for Whales

Monitoring of the fisheries closure : Fisheries and Oceans Canada