Posted on our observation platform on the sacred mountain of Gros-Cacouna, Sami and I aim our binoculars toward the estuary. We may soon have to launch a drone.

Together, we form the Beluga Brigade of the South Shore of the St. Lawrence River, where we work as research assistants for the Window on Belugas project.

We had been staring at the water surface for several hours, on the lookout for small white bumps piercing the surface. The sudden appearance of these cetaceans gives us a thrill. However, this is far from our first encounter with these white whales.

Indeed, our work this summer is to observe and collect research data on belugas. I easily spot the herd that has just arrived. The contrast between the belugas’ white skin and the steely blue hue of the river is a great help.

Sami hurries to prepare the drone for takeoff. In the meantime, I alternate between my prescription glasses and my binoculars to keep the belugas in sight as they periodically disappear and reappear on the surface as if they were playing hide-and-seek.

It may be our only chance of the day to film these cetaceans. We can’t afford to miss it.

Window on Belugas: A new perspective on the lives of belugas

Although drones have been used in marine mammal research for only about 10 years, the technology has already demonstrated its potential.

By flying over marine animals,* scientists can gather previously inaccessible information such as  individual measurements and social behaviour below the water surface. Drones not only provide valuable data for research, but also spectacular images to raise public awareness of the rich and fragile lives of belugas.

The potential offered by drones was what gave GREMM (Group for Research and Education on Marine Mammals) co-founder Robert Michaud the idea to develop the Window on Belugas project in the first place. 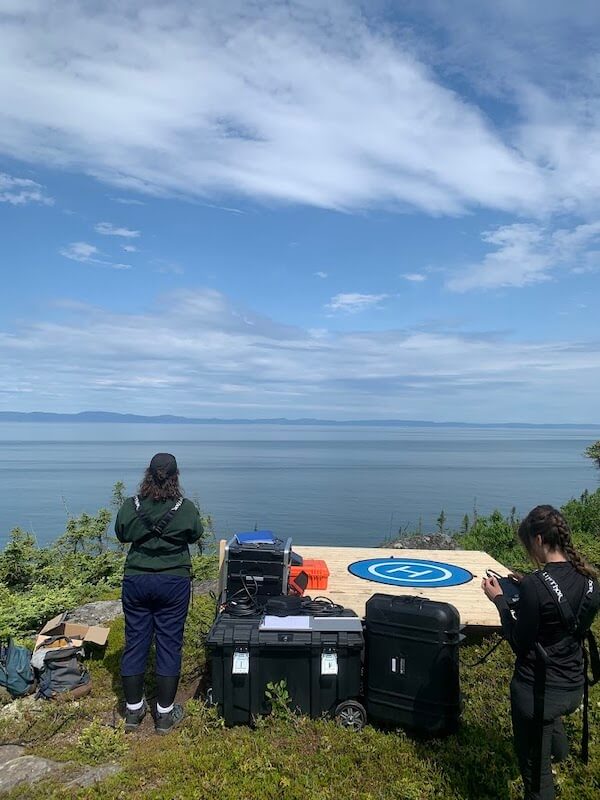 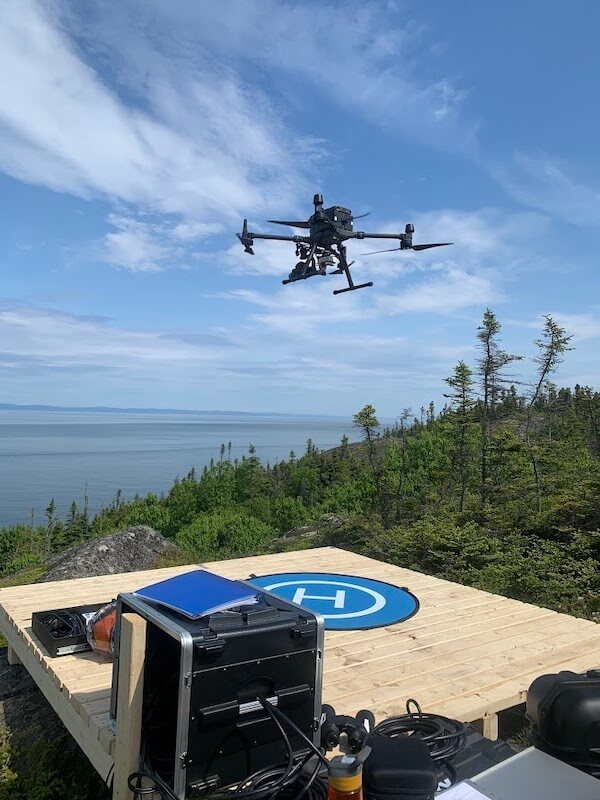 Pilots of a “pilot season”

The idea of ​​using drones for research and education is simple, but actually doing so is anything but straightforward.

Although this project has been in the works for several years now in collaboration with the Marine Mammal Observation Network (MMON), this year is its first season of operation. To launch this project, the team had to get creative time and time again to overcome a long list of logistical, technological and human challenges.

As for the Beluga Brigade, we had to adapt to on-site conditions, protocol modifications and the sensitivity of the drones, for example.

Beyond drone flights, a significant portion of the work is carried out in the office. For example, we must organize our data, which will then be reviewed by the research team this winter. Based on our land observations and videos, the team will study beluga social behaviour and overall fitness, components which fall under the St. Lawrence Estuary Beluga Observatory project.

Despite the obstacles encountered over the course of this “pilot season,” it is exciting to take part in the development of such a project, which will continue to improve over the years.

Back to the belugas… Cacouna is believed to be one of the nurseries of the St. Lawrence population.

Oftentimes, we observe small, scattered groups composed of a handful of adults and juveniles. Sometimes they are in transit upstream or downstream. However, other times they simply linger before our eyes for several hours, feeding and playing.

The drone provides us with an unobstructed view of the belugas’ social behaviour. While some swim alone, others form dynamic groups that seem to play together. We also witness amazing interactions between females and their calves. These are scenes that for us, as observers, are particularly moving.

It is therefore not surprising that Cacouna proved to be a popular site for the development of this project.

The presence of belugas varies over the course of a day and from one month to the next, but regardless of what we observe, it’s always a beautiful day on the mountain.

Once in the air, one must know how to fly these devices in order to collect usable research data. It’s not quite as simple as using a Nintendo joystick!

For the sake of efficiency, Sami and I have developed a communication technique between pilot and assistant pilot that allows us to spot belugas as quickly as possible from the drone. One must cautiously approach them before they dive back into the depths of the estuary.

Our efforts pay off when at last the white whale appears on the screen. It exhales… inhales. And never ceases to amaze us. 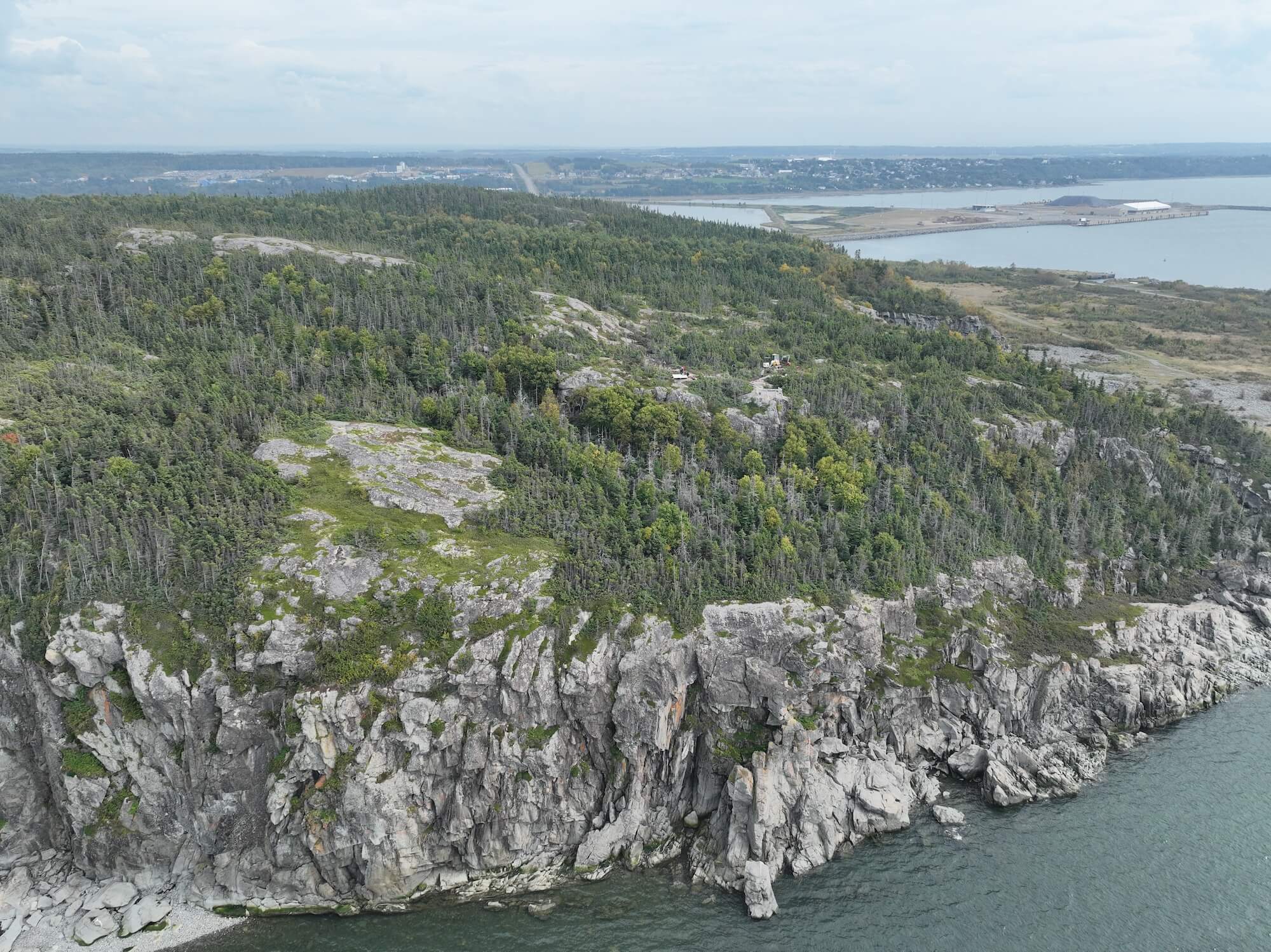 *The Window on Belugas project is a collaborative project managed by GREMM and MMMON in partnership with the Raincoast Conservation Foundation, Parks Canada, Sépaq and the Wolastoqiyik Wahsipekuk First Nation. It is made possible thanks to an investment of $1.1M from Fisheries and Oceans Canada through the Canada Nature Fund for Aquatic Species at Risk (CNFASAR), as well as a contribution of $600,000 from the Government of Quebec (Quebec Ministry of Forests, Wildlife, and Parks and Ministry of Tourism).