Tadoussac: The Whales are Back! 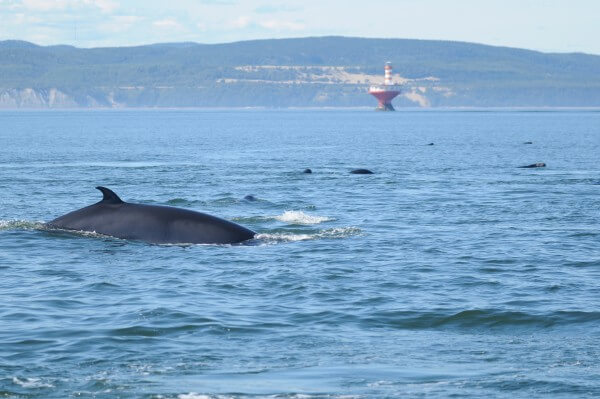 For a number of whale cruise operators in the Tadoussac region, the offshore season debuted the last weekend of April. Despite the strong winds that the passengers were up against, “the very first outing was magical,” exclaims one longtime naturalist, who was hardly on her first cruise out to sea! Ideal light, birds by the thousands, gray seals near the Prince Shoal Lighthouse and belugas on the horizon just as observers are gazing at the Caribou-Qui-Pisse waterfall (its orangish colour, owing to the marshland that it traverses, resembles the urine of this member of the deer family) in the Saguenay Fjord… perfect conditions for encountering whales in the St. Lawrence for the first time or simply seeing them again after a long winter.

On the Gaspésie side, a tour operator from Grande-Grave gets ready for his season, which will kick off on June 1. Spending the better part of his days keeping boats seaworthy, he scans the waters of Gaspé Bay from time to time in the hope of spotting a spout, a tail or a back, but to no avail this week.

In Franquelin, our collaborator reports that “activity is starting to pick up” in her sector. On April 29, she spots two minke whales and two fin whales. On May 2, one of the two minke whales she observes breaches several times, “its white belly ablaze”, meaning it was red from the effect of this demanding physical effort! The next day, the crew on board the crab boat RéAlice discovers a whale performing this same type of acrobatic behaviour. A minke whale? The animal is too far away to confirm the species.

On April 28 in Tadoussac, the white backs of belugas are seen close to shore, clearly visible to the employees of the Marine Mammal Interpretation Centre. They quickly snap a picture, thanks to which they identify the female Athéna, an old acquaintance of GREMM researchers first encountered in 1989. At the time, she was already white, which means that she was at least 12 years old, as belugas fade from gray to white between the ages of 12 and 16. Belugas can live to be 60 or even 80 years old. Which means that Athena may have been born in the 1950s!

In Cap-à-l’Aigle, in the Charlevoix region, an observer notices a group of six belugas near the rocky headlands. He also notes a few harbour seals basking on the rocks exposed by the low tide.

Whether at sea or on land, the whale-watching season is officially underway and the cetaceans are not disappointing!