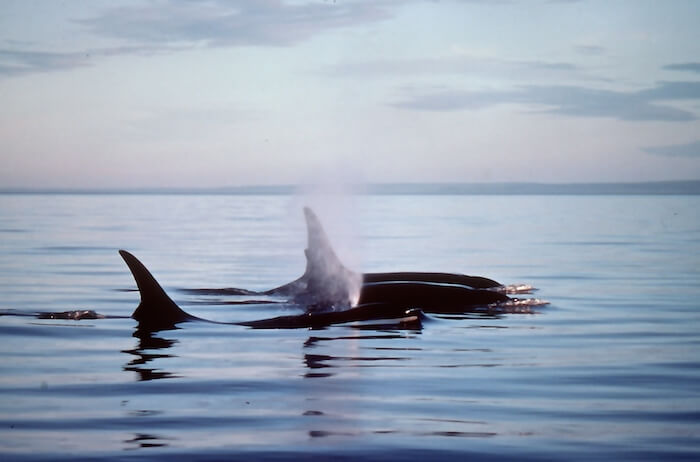 A Canadian-US research team has undertaken a study on the fungi and bacteria found in the breath of southern resident killer whales (also known as orcas) on the west coast. The discovery of multiple bacteria usually found in humans, some of which are resistant to antibiotics, suggests that sewage is contaminating the marine environment.

Entitled “Respiratory Microbiome of Endangered Southern Resident Killer Whales and Microbiota of Surrounding Sea Surface Microlayer in the Eastern North Pacific”, the study examined 26 breath samples of killer whales near the San Juan Islands in the Salish Sea off British Columbia and Washington State. Each sample was compared with surface water (the first 1 mm layer), a human exhalation from a person on board the research vessel and an ambient air sample.

Although the killer whale is not generally considered to be endangered, the population of southern resident killer whales is considered to be at risk, with a mere 78 individuals tallied in the December 2016 census. Possible threats include a decline in their main prey, the chinook salmon; increased shipping and recreational boating traffic; contamination of their prey and the water in which they live.

In an interview with National Geographic, Linda Rhodes, toxicologist and molecular biologist with NOAA, states,

“We were quite surprised to see some of these. These were things that if they came out of our breath the doctor would think that was not good.”

Salmonella, a bacterium known for the severe food poisoning that it can trigger, staphylococcus, a skin bacterium that causes skin rashes in humans but that can turn into pneumonia if inhaled, and fungi that can cause serious illnesses in humans and some animals, have all been found in their breath. This does not necessarily mean that the whales are ill, but rather that if they have a weak immune system, they are at greater risk of developing and dying from respiratory diseases.

How did these bacteria and fungi end up there? One assumption stems from the proximity to the city of Victoria, British Columbia, which discharges its wastewater directly into the Salish Sea without special treatment.

To carry out the research, the crew on board the boats used 7.6 metre long poles fitted with Petri dishes, cylindrical glass dishes that are used to study microorganisms. This technique failed to collect as much breath as expected: getting close enough to individuals to take the sample and aligning the platelets to collect the breath is extremely challenging. With the advent of drones, collecting such data could become much easier.

Ocean Alliance SnotBot Programme from We Breathe Productions on Vimeo.

Ocean Alliance, a whale research and education group based in Maine, has created a low-cost, non-intrusive tool to study the valuable data contained in whale breath. The SnotBot is in fact a drone adapted for sampling whale breath that films while capturing the precious mucus in four Petri dishes or on sponges. To date, analyses have been used to identify DNA, ketones, hormones (notably to determine whether the animal is pregnant) and microbiomes contained in the whale exhalations. The team has been able to test its new tool on southern right whales, blue whales and humpback whales. Another Maine institution using drones to collect breath samples is the Woods Hole Oceanographic Institution.

In the Saguenay-St. Lawrence Marine Park, drones are used to study beluga behaviour. Collecting breath samples from these small whales using drones is impossible, however. Michel Moisan, lead technician for the Group for Research and Education on Marine Mammals (GREMM), explains: “If the drone comes too close to the belugas, they can sense it. Because belugas have the ability to turn their heads, they watch it for a while and then flee.”