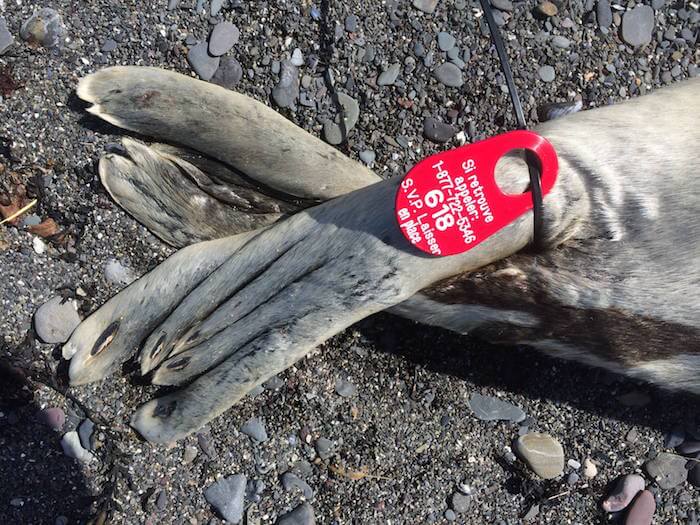 Nearly a dozen seal carcasses were reported to 1-877-7baleine in April, and soon the first reports of pups will also start coming in.

The Quebec Marine Mammal Emergency Response Network handles all cases of dead or vulnerable seals or whales found in the waters or on the shores of the St. Lawrence. Seals accounted for about 45% of the cases reported to UMM over the past five years.

What if you find a dead seal on shore?

First of all, it is important to realize that there are millions of seals in the St. Lawrence. It is therefore natural to find a few dozen carcasses on the shoreline each year. Nevertheless, these carcasses should be reported to 1-877-7baleine (1-877-722-5346).

Even though no research program exists to document the causes of mortality in seals, researchers within the Network strive to document at a minimum the species of seal found (at least four species of seal visit the St. Lawrence annually), its approximate age and whether or not it shows any signs of interaction with humans. Photos taken by witnesses or volunteers will be used to answer these questions.

Many seal carcasses have holes in their bodies that resemble bullet holes. However, decomposers will usually enter through the body’s orifices (eyes, ears, nostrils, genital slits) and create a circular opening that will expand. 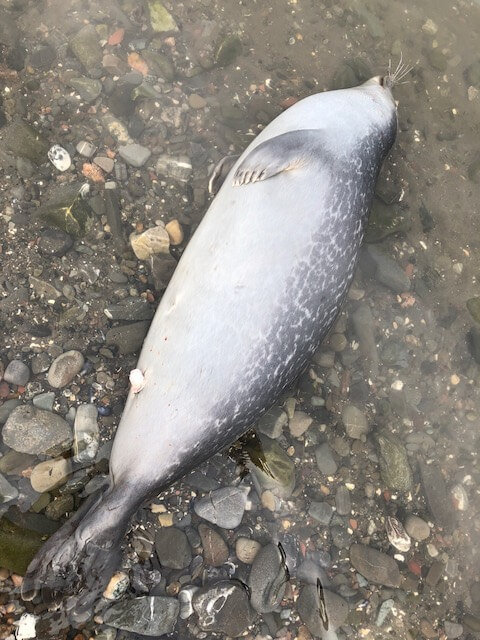 If the carcass discovered proves to be a nuisance to citizens – for instance if it is less than 50 metres from homes or stranded in a busy location – it may be removed by the municipality or the regional environmental emergency teams of the Quebec Ministry of Sustainable Development, Environment and the Fight against Climate Change. Otherwise, it will serve as food for scavengers and microorganisms and will decompose naturally.

What if the seal is alive?

The months of May and June are pupping season for harbour seals. Every year, twenty or so reports are received involving live young seals stranded on shore; such situations can appear critical and local residents are eager to come to the animals’ aid. What should you do? Simply leave the animal alone and don’t intervene. The lives of seals are split between the sea and the land. Seals come onto land to rest, so it’s important not to try to interact with these animals if you see them lying on the shore. Some local residents have noticed the presence of seals on the rocky shores of the Bas-Saint-Laurent in recent weeks. Not to worry… this is a natural behaviour and seals can remain out of water in this “banana” position for hours.

If you see anyone behaving inappropriately by coaxing the seal back into the water, trying to feed it or or give it water, not keeping a safe distance of at least 50 metres, or harassing an animal in any way (some people even take selfies with them), you are requested to promptly report the situation to Marine Mammal Emergencies at 1-877-7baleine. Volunteers will travel to the site to remind the individuals of the correct behaviour to adopt. If people knowingly ignore the regulations by interacting with the animal, an officer may be called to the scene to enforce the law. Offenders are subject to a fine of up to $100,000.