Return of the Big Blue 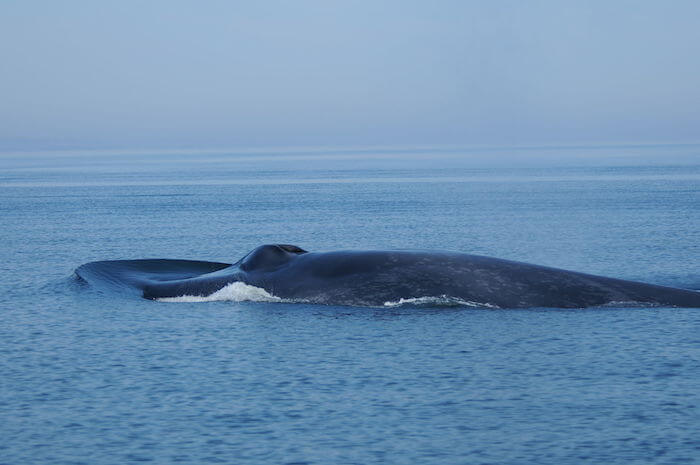 It is said that the St. Lawrence is one of the best places in the world to observe blue whales, as this giant of the seas regularly frequents our waters and often swims close to the coast. This species usually occurs later in the summer or in early autumn. This year, two blue whales were observed on May 29 by the Centre d’Éducation et de Recherche de Sept-îles (CERSI), but sightings were virtually non-existent in the months that followed. This week, we can announce the return of the big blue!

In the vicinity of Les Escoumins in the Côte-Nord region, cruises reported between six and eight blue whales. Farther downstream, a veteran collaborator reported on August 30, after a marathon tour that took him through Matane, Pointe-des-Monts and Grosses-Roches, a single observation, namely that of “B16, a.k.a. Blanco, 7 nautical miles off Petit-Matane, a male blue whale I’ve known since 2004″. Amazingly, this sailor had photographed him at exactly the same place six years earlier to the day! On 27 August, this same observer saw two blue whales about 10 nautical miles off of Grosses-Roches: B240, observed a few times, including last year at L’Anse-à-Valleau, and B120, “a new one for me, but not for Richard Sears “, pioneer of research on blue whales in the St. Lawrence. Lastly, in Gaspé Bay, the research team from the Mingan Island Cetacean Study (MICS) crossed paths with three to four blue whales every day. According to these scientists, “there seem to be blue whales a little everywhere in the St. Lawrence! It’s shaping up to be a great season for blues!”

North Atlantic blue whales are still poorly understood. Commercial whaling ended in the 1960s, leaving populations on the brink of extinction. According to estimates, the global population of blue whales is believed to be between 5,000 and 12,000 individuals. However, there are no reliable recent estimates. The western North Atlantic population has been approximated at a few hundred. Just over 400 blue whales have been photo-identified (up to 105 in one year) in 35 years of research concentrated primarily in the Gulf of St. Lawrence.

More than just blue whales in the spotlight

Of note for the Tadoussac sector, the fin whale named Trou has grabbed attention in recent days; this greyhound of the seas regularly shows its tail when it dives, a rare behaviour for a fin whale. Another fin whale also attracted the attention of our observer in Franquelin as it passed within 100 m of the shore. Its cream-coloured right jaw was visible through the water, as was its light-coloured chevron.

In Gaspé Bay, the mother-calf humpback duo continues to delight visitors, especially when the young one decides to breach! Additionally, the hundreds of white-sided dolphins present obviously do not go unnoticed either. MICS also shared several excellent photos of these cold-water dolphins.