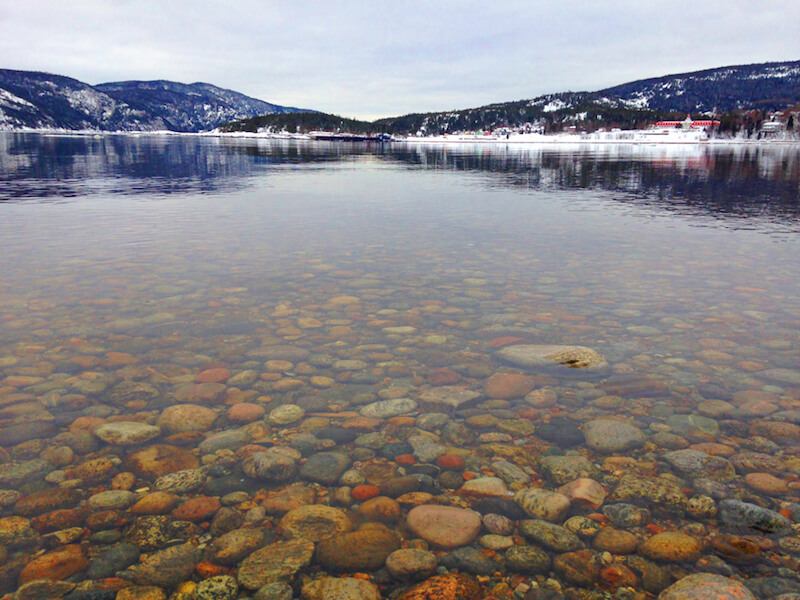 After long hours spent this past summer scanning the open sea for whales and pointing them out to visitors, an employee of the Marine Mammal Interpretation Centre (CIMM) sets foot in Tadoussac for the first time in winter. A remarkably different decor awaits her. In summer, the white backs of belugas dot the waters of the Fjord, minke whales surface just beyond the rocks of Pointe de l’Islet and the bay hums with the comings and goings of cruise boats. In winter, scattered chunks of ice glisten in the Saguenay and the boats are taken out of the marina, even those of the Canadian Coast Guard! Nevertheless, the CIMM employee attempts to locate a whale and discovers a minke whale in the bay! A few days earlier, belugas were also seen near the ferry terminal in Les Escoumins.

In Franquelin, the panorama over the water resembles that of summer if one avoids looking at the white, snow-covered shoreline. Boat traffic is not nearly as intense. This week, our collaborator spotted only two minke whales, but remains optimistic. Every winter, there are pleasant surprises: she fondly remembers a blue whale she once spotted on New Year’s Day! She advises those who hope to observe whales in her region – whether in summer or winter – to go to Pointe à la Croix, a promontory offering breathtaking views over a marine canyon some 200 metres deep. Keep in mind that this well-kept secret of the North Shore requires a 5 km hike on snowshoes before one reaches the shore. But oh, what a landscape!

In Sept-Îles, one of the recommended viewpoints for winter whales is from atop Côte Jambon (Gallix area), which overlooks Sainte-Marguerite Bay. However, this week, no whales are spotted from this cape or from along the banks. The tidal flats, however, are alive with eiders and mergansers.

A summer resident of Pointe-des-Monts who occasionally returns to his chalet there in the winter reports the presence of two blue whales on December 1. It’s a sort of déjà vu: almost every winter, he calls the Whales Online team several times to report blue whale sightings. Will the trend continue in 2018? We sure hope so.

Lastly, dozens of harp seals abound along the shoreline between Sainte-Flavie and Sainte-Luce-sur-Mer. A few harbour seals are also visible in Bic National Park, but their numbers pale in comparison to the large gatherings observed in summer.