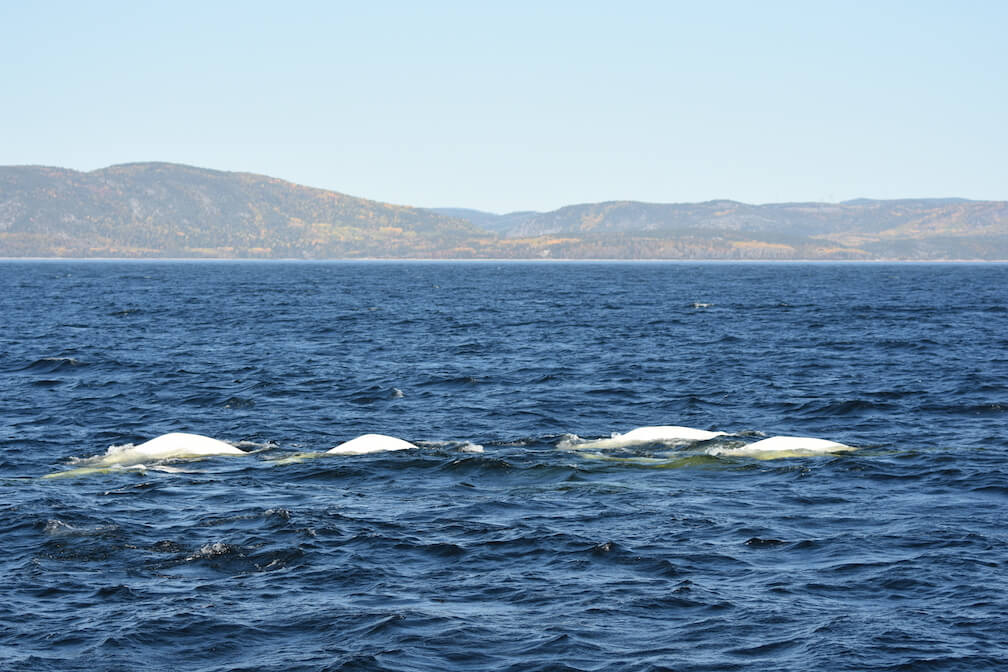 The cruise ship Narval III of the whale-watching company Croisières Baie de Gaspé docked for the last time on October 11, and it was not because of a lack of whales. “It must have been -5oC out on the water,” says the cruise employee who could not leave Gaspé Bay due to the strong waves offshore. Nevertheless, three fin whales brought excitement to the last cruise of the year. Over the past few days, the white and black tails of humpbacks have been standing out against the flaming red foliage of the autumn trees. For an hour on October 10, a humpback whale hurled itself into the air and crashed down into the water, creating waves behind it. Minke whales, porpoises and dolphins have also been observed.

In the early morning hours of October 11, thirty or so spouts rose above the waves between Anse au Griffon and Cap de Bon-Ami, about 5 to 7 nautical miles offshore. “I haven’t often seen such a concentration in the area… maybe one other time this summer,” says the observer who was fortunate enough to witness this spectacle.

In the Percé sector, the glistening backs of whales seem to have moved away from the coast. Grey seals and harbour seals are still being seen near Percé Rock.

In Tadoussac, the diversity of the species present and the quality of the observations continue to excite tourists and year-round residents along the coasts. On October 10, GREMM’s lead naturalist boards a cruise ship to give a presentation. She is quickly interrupted by two fin whales observable through the clear water just below the surface. “We could clearly see the asymmetry in the colours of the jaw,” she notes. The heads of fin whales show two different colours: the bottom of the left jaw and the baleen on this side are dark grey or even black, while on the right side, the jaw and baleen are white. Different theories exist to explain the role of this peculiar colour asymmetry: it might create contrasts that help the animal camouflage itself, or it might allow the whale to frighten or disorient its prey when it pivots on itself before engulfing them.

Near the Bergeronnes, those brave enough to engage in autumn camping were rewarded with sightings of humpbacks, minke whales and belugas.

On October 10, humpback whales passed by the wharf in Port-Cartier. “We could see their tails and sometimes even a few breaches,” says our observer. Not far from Île Grosse Boule, two fin whales were swimming peacefully, and at Pointe-aux-Anglais, a blue whale was observed.