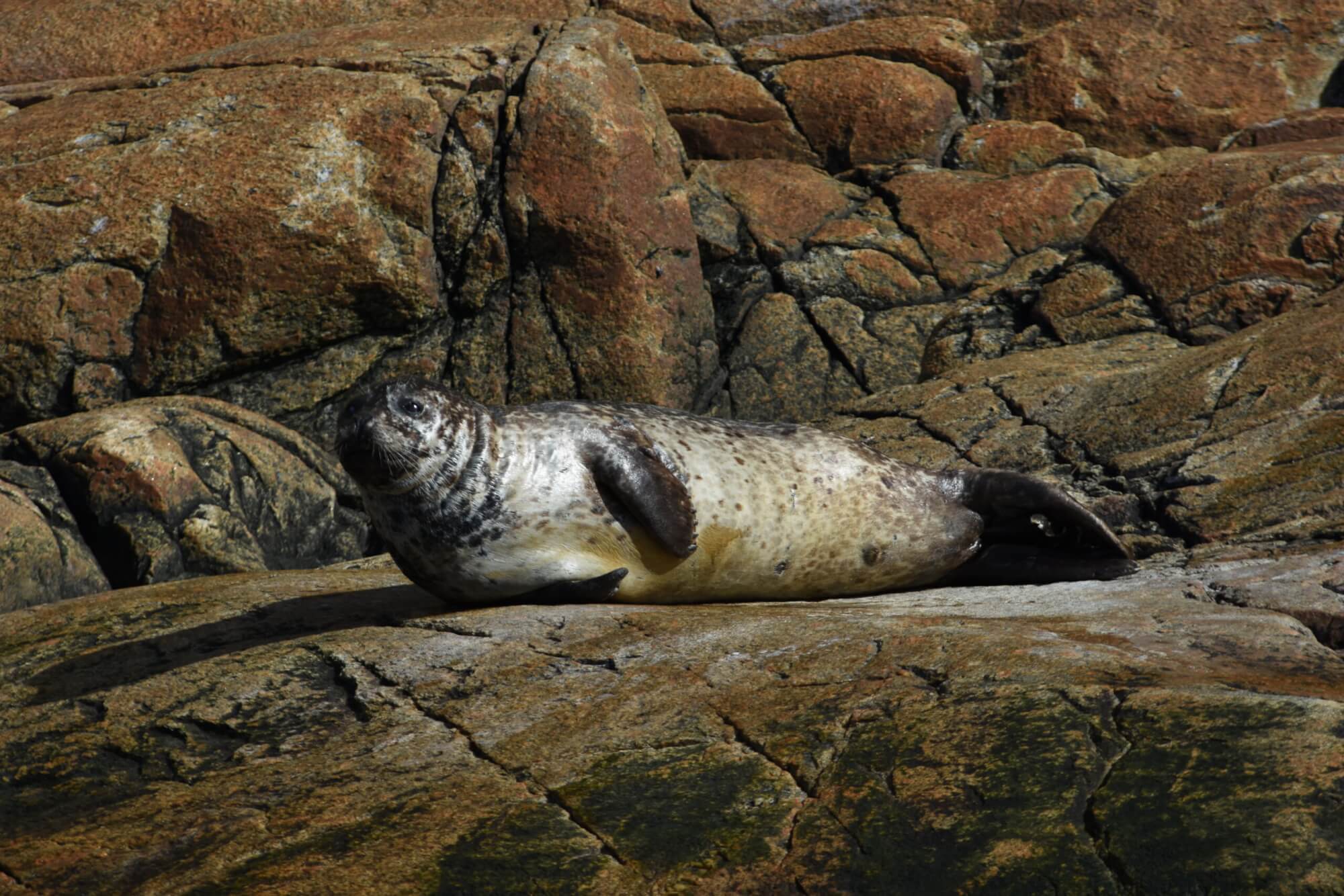 A resident of the St. Lawrence River

The harbour seal is rather well-liked by visitors to the St. Lawrence. The smallest pinniped in the region, it can often be observed doing the “banana” pose on shore or on a rock. This coastal and amphibious species splits its life between land and sea, but rarely strays far from shore. Like the beluga, the harbour seal is a year-round resident in the St. Lawrence and is relatively sedentary. Rather solitary by nature, especially in water, it may be observed in groups at onshore haulouts, though this is believed to be more due to the lack of space at these sites rather than to gregarious behaviour. 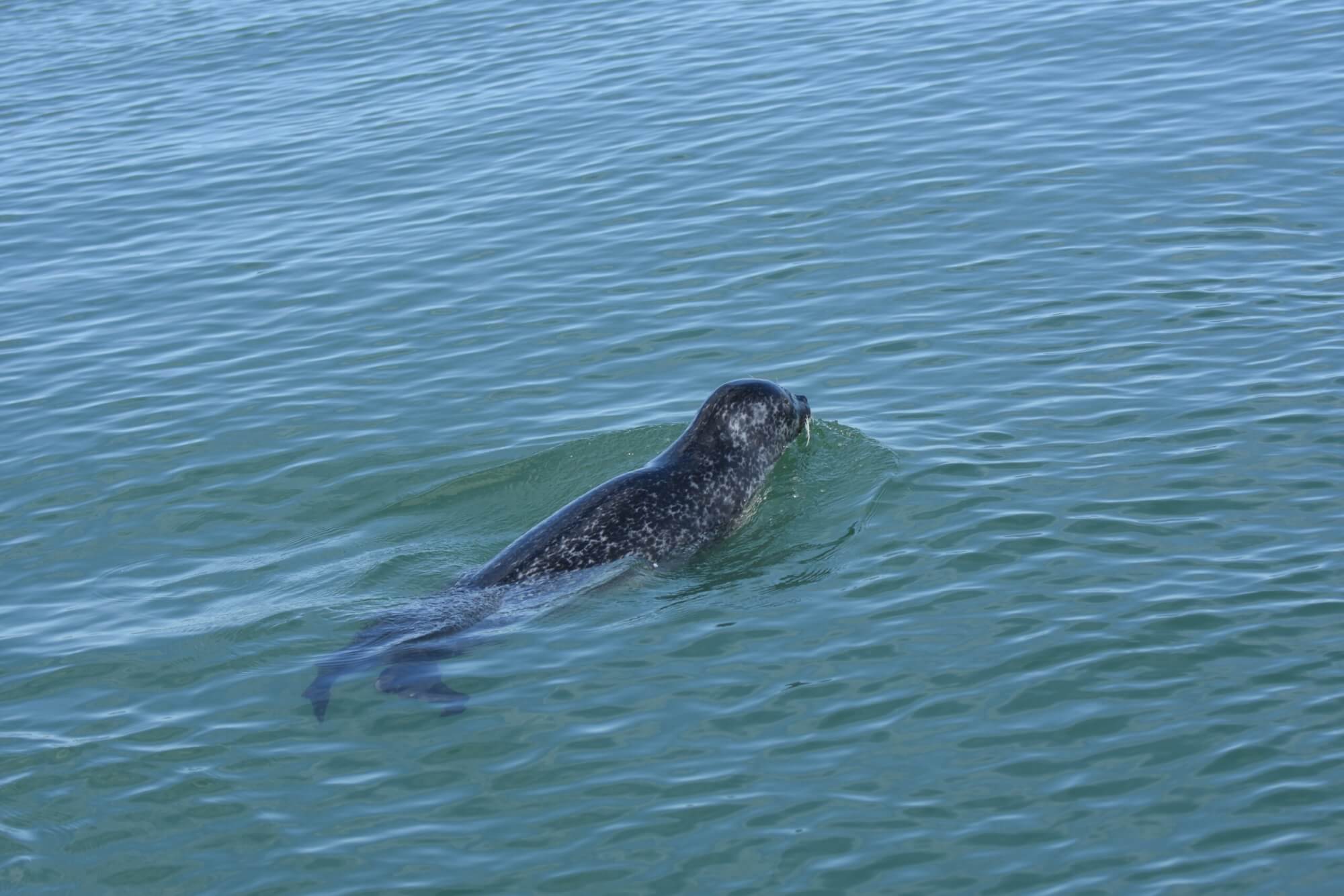 There are different subspecies of harbour seal. The one that frequents the St. Lawrence is that of the Atlantic and eastern Arctic (Phoca vitulina concolor). The exact size of this population is unknown, but is estimated to be between 20,000 and 30,000 individuals. The harbour seal owes its name to the fact that it likes to rest in areas that are sheltered from waves and high tides such as ports and marinas.

The harbour seal is not known to migrate and is relatively faithful to the same sites. It has the most extensive range of any pinniped on Earth.

The population of the Atlantic Canada subspecies is believed to have fallen to 20,000 to 30,000 on account of intense bounty hunting that ended only in the 1970s. However, the Committee on the Status of Endangered Wildlife in Canada (COSEWIC) has designated this population as “Not at Risk” since November 2007.

On the other hand, the freshwater Lacs des Loups Marins subspecies, which numbers no more than one hundred individuals, was uplisted to “Endangered” in 2018. This population has also been designated “Endangered” under the Species at Risk Act since 2017.

In the Red List of Threatened Species, the International Union for Conservation of Nature (IUCN) classifies the harbour seal as “Least Concern”.

Moulting takes place every year from July to mid-September. During this period, harbour seals spend considerable time at haulouts, as they need to conserve energy. Moulting implies high blood flow to the body surface, which is why the animals need to seek warmth out of the water. For observers, it is particularly important to maintain a safe distance from them so as not to disturb them during this period.

The harbour seal feeds mostly on fish, especially herring, sand lance, capelin, smelt and plaice. It may also consume crustaceans (e.g. shrimp) and molluscs (e.g. squid). The harbour seal is an opportunist that will vary its diet according to the availability of prey in its environment. Pups tend to eat smaller invertebrates and fish. The harbour seal is believed to feed mostly in the evening and at night. It can dive to depths of up to 480 m and stay under water for upwards of 30 minutes. Before diving, it lowers its heart rate and stocks up on oxygen in its blood and muscles, while its nostrils close tightly – almost like the blowhole of a whale! – to prevent it from drowning.

In the absence of a predominant threat, the harbour seal population of the St. Lawrence is fairly stable. Although seals – like any species of the St. Lawrence for that matter – can become entangled in fishing gear or collide with boats, such incidents have yet to be observed. They may on occasion be attacked by certain species of shark present in the St. Lawrence, though their main predator, the killer whale, is not a regular visitor to the region. Some individuals die of starvation after venturing to areas with insufficient food, while others may become infested with viruses, worms or bacteria. Any number of factors can result in mortality, though no single cause appears to be predominant.

The impact of human presence and activities on harbour seal conservation should not be underestimated. A year-round resident of the St. Lawrence, the species is also vulnerable to chemical pollutants and habitat degradation, not to mention fishing, which may reduce prey availability. Moreover, it is often the target of harassment by observers, which is a major source of stress. Lastly, there is also a risk associated with the feeding of seals by humans. Feeding seals is prohibited, otherwise they could lose the ability to hunt on their own.

Males reach sexual maturity between 4 and 6 years of age, and females, between 3 and 5. Bulls compete for females, often inflicting on one another injuries such as bites to the neck or head. Mating usually takes place in the water. There are two breeding seasons per year: spring and fall. Harbour seals are not particularly noisy, though bulls may occasionally be heard vocalizing during the breeding season to attract females, or if they feel threatened.

Gestation lasts an average of nine and a half months but can go up to 11 months due to the phenomenon of delayed implantation.

In the Lower St. Lawrence Estuary, females give birth on land (in the intertidal zone) or in shallow water between mid-May and mid-June. In the event they perceive danger, they can delay birth by several hours or even a few days.  The mother gives birth to just one pup at a time (twins being very rare). At birth, the pup measures approximately 75 cm and weighs about 10 kg; it can take to the water within a few minutes.

Nursing lasts between 4 and 6 weeks. With a fat content of 50%, the mother’s rich milk enables the pup to triple its weight during this period. Females recognize their own pups by scent and are highly protective. Nevertheless, they may leave them alone on shore to go hunting, returning to feed them hours or even a few days later. 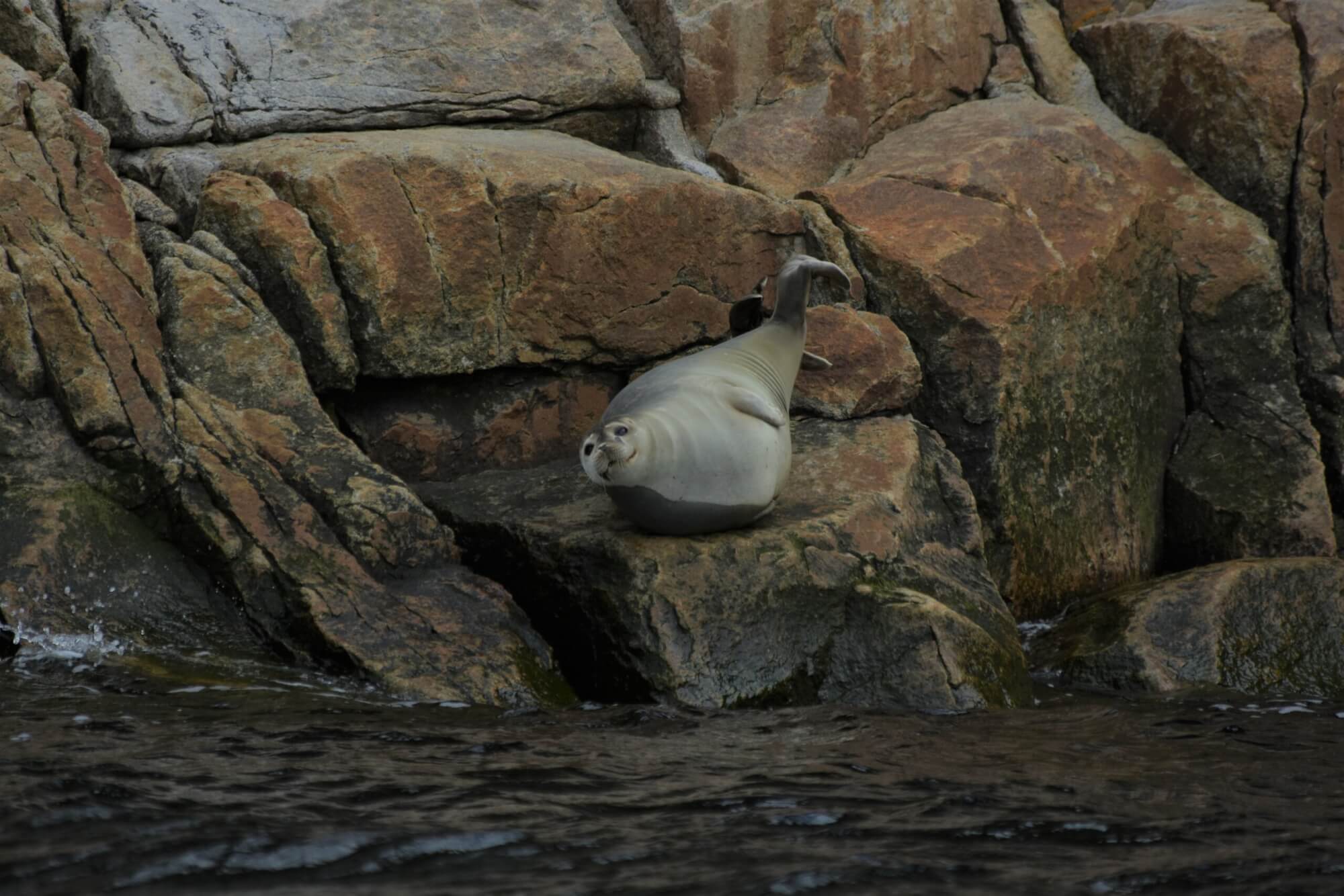 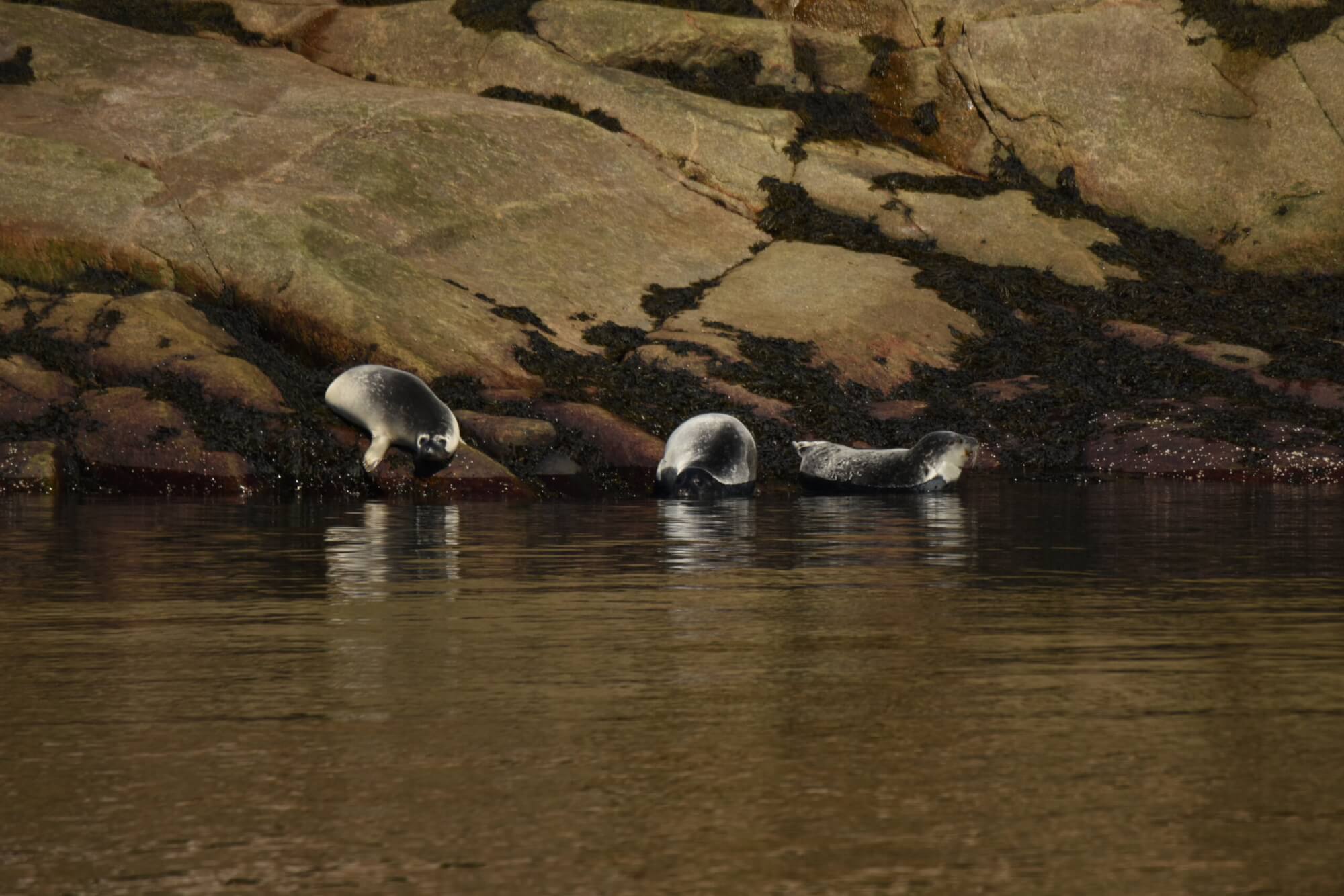 For the 15th consecutive year, Parks Canada and Sépaq continue their monitoring of harbour seals in the Saguenay Fjord. The objective of this project is to study the evolution of the population and better understand the species’ distribution. While an average of 69 individuals were identified in the region between 2016 to 2020, the first combined effort this year yielded a tally of no fewer than 168 individuals. The highest figure since the start of the project in 2007!

Also, in the fall of 2020, a mass stranding at Batture aux Vaches (tidal flats) at the mouth of the Saguenay sparked a new monitoring effort aimed at determining the causes of this incident and understanding how harbour seals use this area. 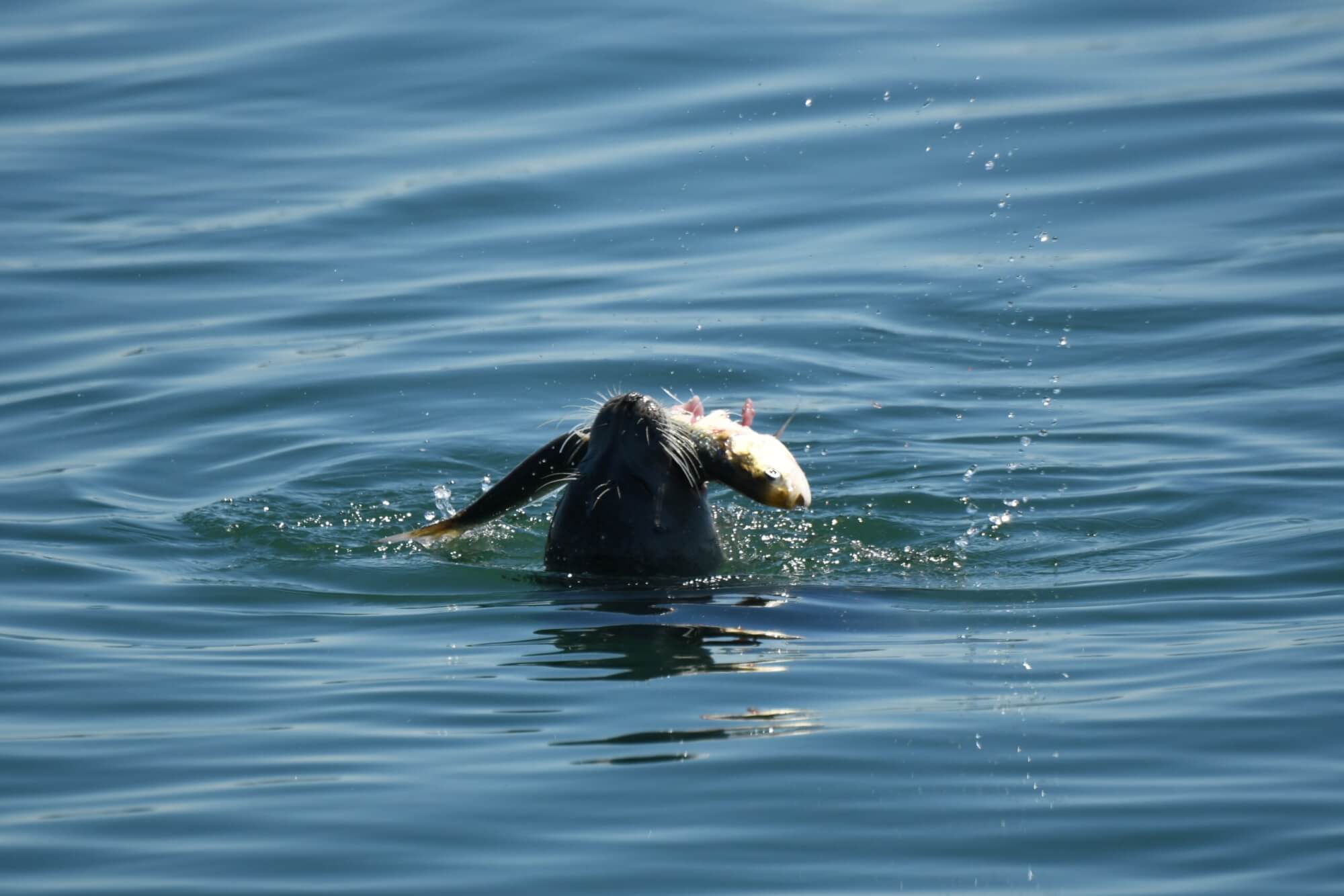 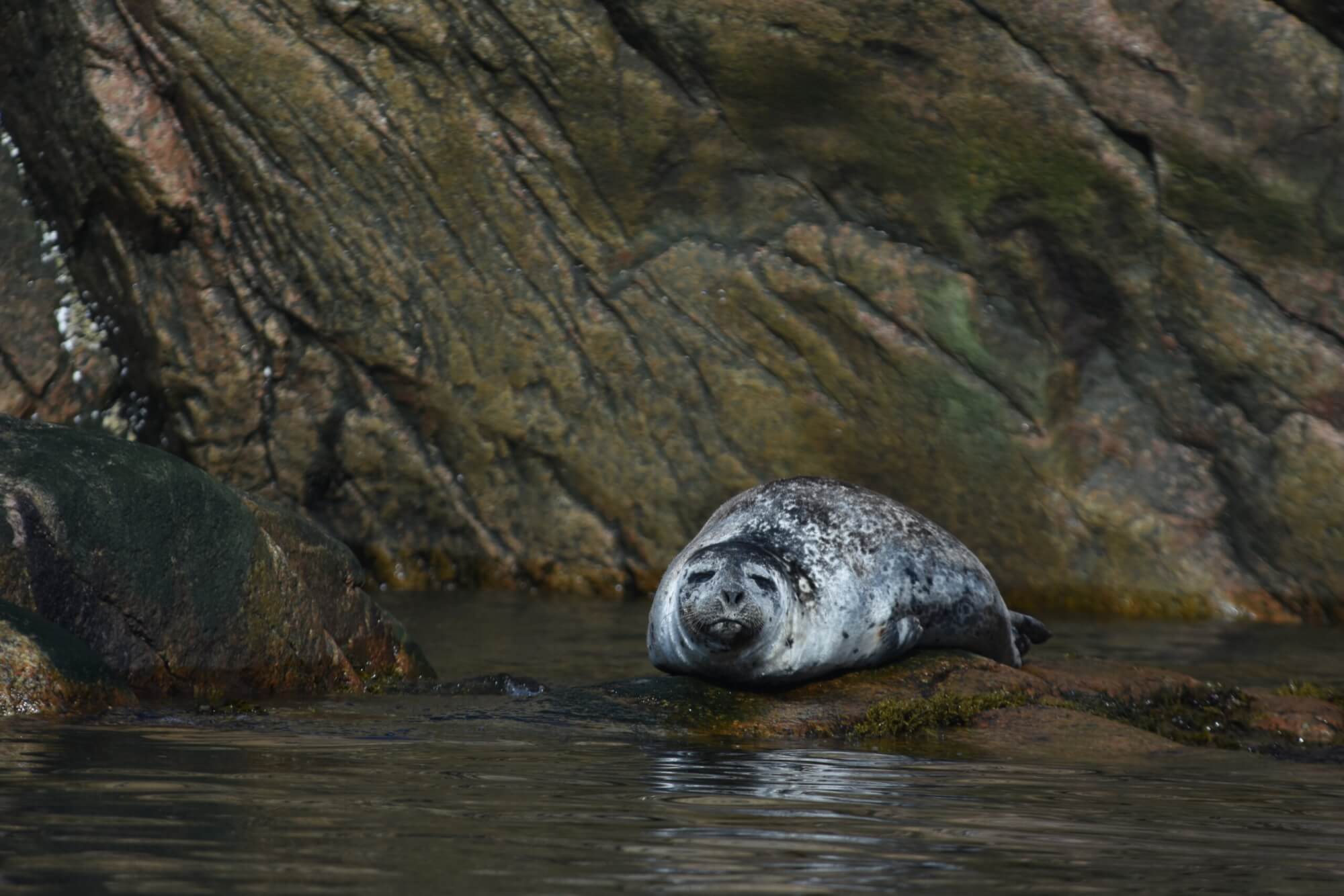 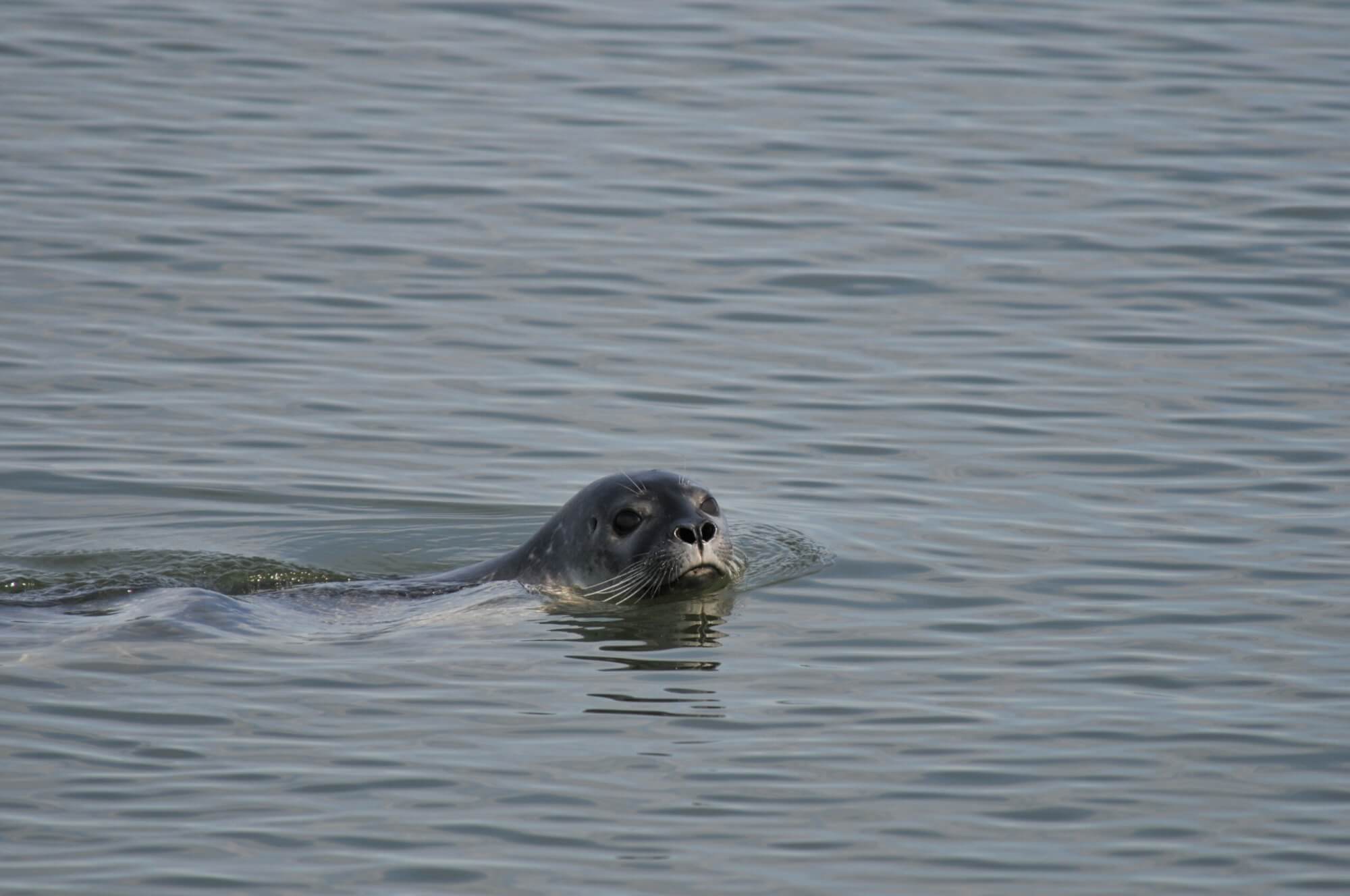