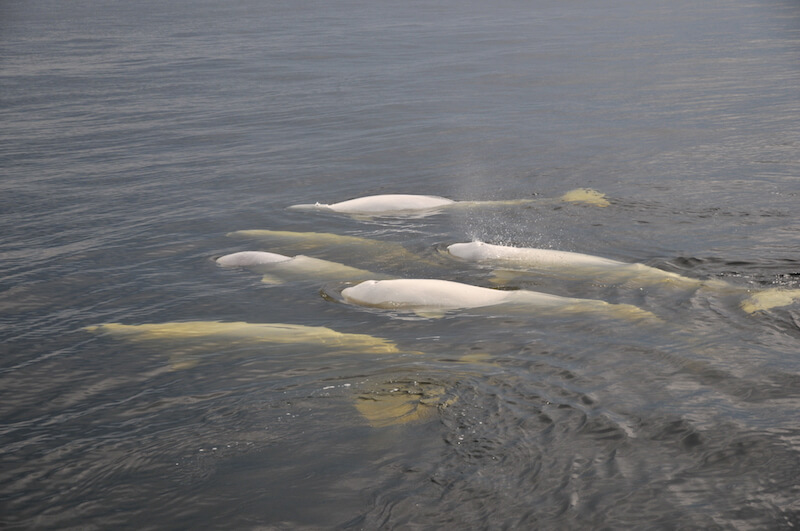 The week goes by and with each passing day we receive more sightings from our network of collaborators throughout Quebec. Just like watching marine mammals, reporting for News from Afield requires patience.

As November is winding down, two minke whales offer a brief diversion for our collaborator in Franquelin. They’re not alone. Several common eiders are in the area as well. To withstand these frigid waters, these large sea ducks are endowed with an extremely dense plumage. Their down is one of the most effective insulating materials known. Among other things, it is used in the manufacture of anoraks, sleeping bags and comforters. During the breeding season, the female eider pulls down from her breast to line her nest and thereby protect her eggs.

Let’s get back to the minke whales. A few individuals are spotted in Sainte-Marguerite Bay. We’re not talking about the bay located in the Saguenay Fjord, a summer beluga hotspot, but rather Sainte-Marguerite Bay in the Sept-Îles region, which is known for hosting large rorquals. Two large blasts are also seen there on November 27.

On November 30, a few members of the GREMM team spotted a dozen or so belugas near the ferry crossing from the Marine Mammal Interpretation Centre in Tadoussac,. The observation is spectacular: their whiteness contrasts with the dark waters of the Saguenay while the high rocky walls behind them makes for a stunning backdrop. One research assistant wastes no time in snapping several photos. However, the distance is too great to allow for any individuals to be recognized. A few days earlier, it was a merchant ship captain’s turn to spot four belugas off Cap au Saumon in Charlevoix and minke whales between Île Rouge and the Prince Shoal lighthouse.

All around the Gaspé Peninsula, seals are being observed. Harp seals are invading the icy waters of Gaspé Bay and gray seals abound between Chandler and Newport. On the rocks exposed at low tide, harbour seals adopt their characteristic “banana” position – head and rear flippers curved upwards – and can be seen at various places between Mont-Joli and Saint-Fabien-sur-Mer in the Lower St. Lawrence region.