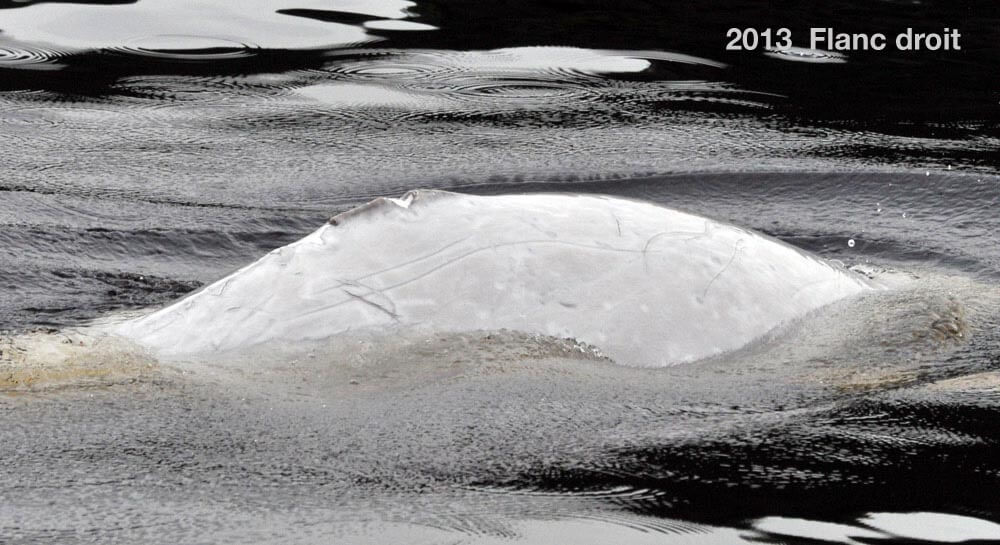 Hector is easily recognizable thanks to two deep notches in his dorsal crest, which are visible from both sides. 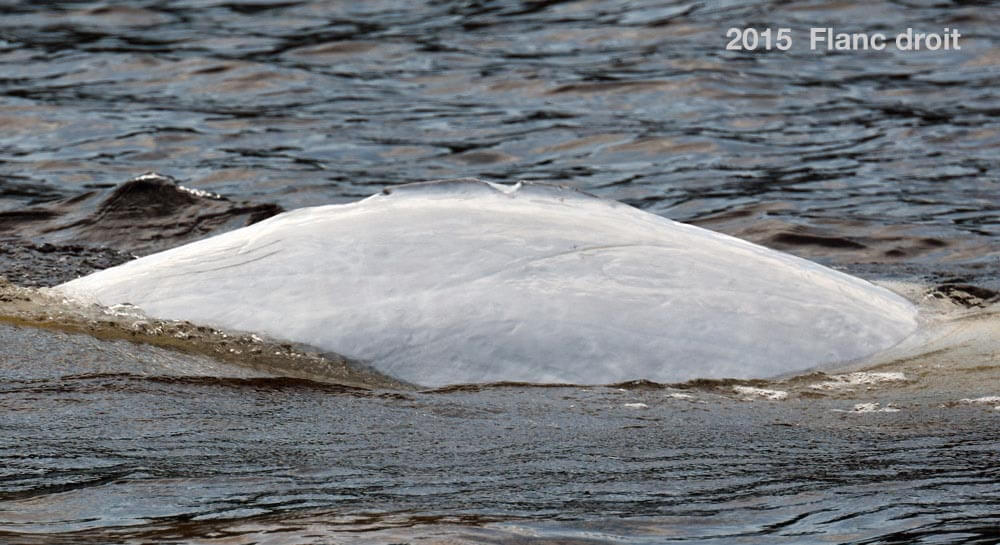 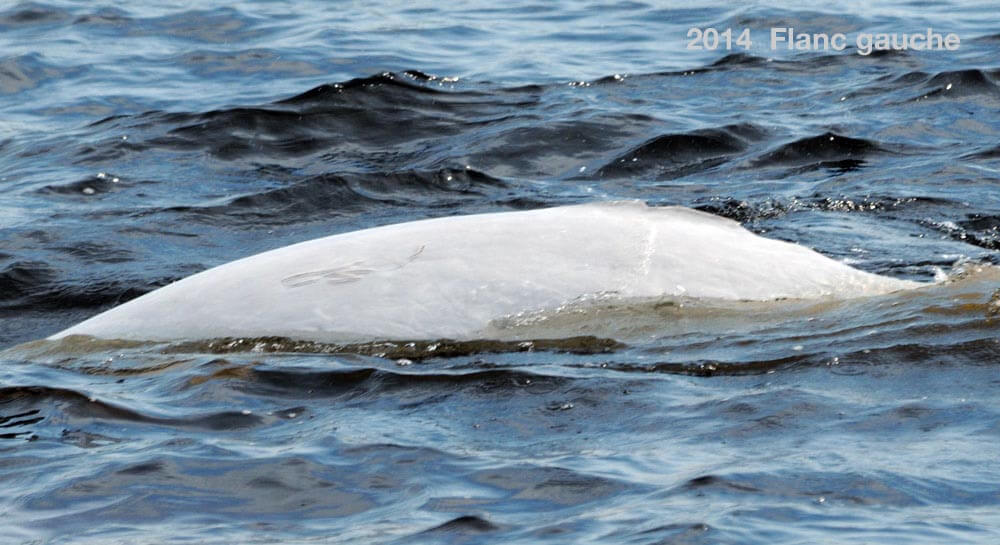 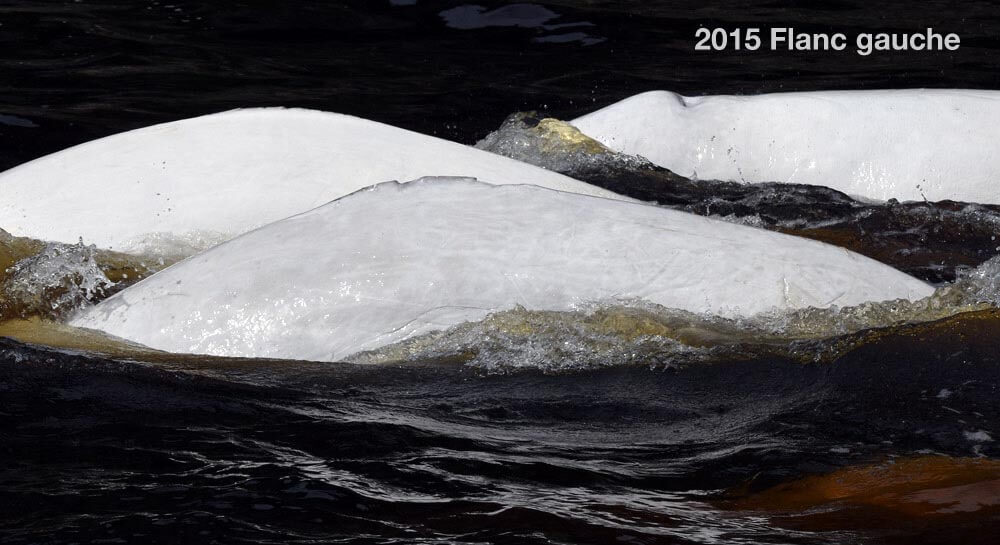 It was in 2013 that we first encountered Hector, at which time he was rather small and dark gray in colour. Since then, he has already faded somewhat. Based on his size, he might have been born around 2008. Over time, his change in colour may help us to confirm his age. Belugas fade from gray to white between the ages of 12 and 16.

When we encountered Hector for just the second time, we took a skin sample amounting to just a few milligrams from his back. This biopsy allowed us to confirm his sex: Hector is a male. The DNA extracted from this sample still holds a few secrets about his genealogy, which will be revealed to us shortly!

To date, Hector has been observed in mixed herds and in herds of adults accompanied by young. When he reaches adulthood, we expect that he will join one of the large networks of bulls. Indeed, in summer, adult belugas exhibit a high degree of sexual segregation. Bulls and cows demonstrate clear preferences, as much in their social associations as in the sectors that they patronize. This behaviour is less pronounced in juveniles and young adults.

On a sunny day in July, Hector is found not far from Les Bergeronnes in a large herd numbering over 100 individuals. The animals are quite active, with the belugas swimming at a healthy speed in small, unstable groups. We focus on the smaller clusters surrounding the larger core group. We take a photo of Hector, behind whom we spot two grey seals. The St. Lawrence is truly teeming with life!  The belugas are heading toward an area where there are observation boats as well as fin whales. There must be schools of small fish there. To avoid adding yet another boat to the sector, we decide to look for a different herd to study.

At the mouth of the Saguenay, the Bleuvet makes its way through a light fog. We spot a herd of 15 individuals consisting of almost as many young as adults. Among the belugas is Hector, who is swimming slightly away from the others. It should be pointed out however that the herd is scattered, with the animals swimming alone or in pairs. All of a sudden we are forced to terminate the contact, as the wind has picked up, as have the waves. The winds have gone from 10 km/h to 20 km/h, and waves that were just 15 cm have now swelled to almost 1 metre!

The summer of 2016 – our 32nd season at sea with the belugas – was once again rich in encounters and surprises. Amongst other sightings, we saw Hector on at least three occasions! He was observed in mixed herds and in herds of adults accompanied by young. He does not yet seem to have joined any of the large networks of males.

September 9, 2016: We don’t make it out of the Tadoussac marina until afternoon, our departure having been delayed by the fog. We’re excited! This is the first day of biopsy collection – for the fourth and final sampling season – to determine the proportion of pregnant female belugas. The samples collected will allow our colleague Véronique Lesage (researcher at MLI-DFO) to answer a fundamental question: is the pregnancy rate in St. Lawrence belugas “normal”?

Our encounter with Hector took place shortly after our departure, in the vicinity of Anse à la Boule in the Saguenay. He’s in a herd of about forty individuals: adults, young and three newborns. They’re all heading rapidly toward the mouth of the Saguenay, with our boat following “in their wake.” At Pointe Noire, weather conditions worsen: the waves grow stronger and we gradually lose track of the animals, including Hector.

Baie Sainte-Marguerite: we spot a herd of 30 to 50 adults and young, including three newborns. Together with the young Hector we spot Athéna, an adult female that we have known since 1989. The proportion of young in the herd is staggering. Individuals are engaging in what we call “milling”, which consists of diving and resurfacing at the same location, a behaviour often associated with feeding. Baie Sainte-Marguerite seems to be a unique and highly important site for St. Lawrence belugas. It is located approximately twenty kilometres from the mouth of the Saguenay and lies within the Saguenay-St. Lawrence Marine Park (SSLMP). The role that this bay plays for belugas, especially females and young, is not yet fully understood. It might be a feeding, resting or socialization area for young. It might even be a calving ground for females.

We spot Hector for the second time this week. We had photographed him in the same sector on August 14, at the confluence of the Saguenay and the St. Lawrence, between Pointe Noire and Pointe Rouge. Today, he is swimming in a herd of some thirty individuals, including adults, young and three calves. Hector is swimming in the company of 7 other large “grays”, all young adults whom we’ve nicknamed the “teenagers”. The mouth of the Saguenay is a meeting place! Here, networks of male belugas regularly cross paths with those comprising females and young. Short-lived herds form here due to the abundance of food.

Cowboys Fringants and their fans

The Cowboys Fringants and their fans adopted Hector (pending).

Also a big thank you to all those who contributed to this adoption by mobile and cash donations during the show of the Cowboys Fringants at the Grand Théâtre de Québec on March 4th 2016!